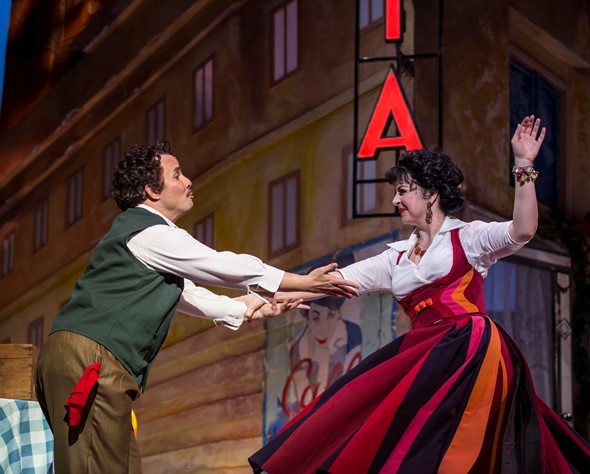 Many opera enthusiasts, many friends of Chicago Opera Theater, must have emerged from the company’s recent double bill of Donizetti one-acters, early and late, at the Studebaker Theatre thinking what I was thinking: Who knew?

Gaetano Donizetti (1797-1848), a prodigious composer of bel canto operas, is remembered today essentially for a handful of works: “Lucia di Lammermoor,” “La favorita,” “The Daughter of the Regiment,” and “Don Pasquale,” though a few others enjoy occasional revivals.

But who ever heard of his late one-act comedy “Rita,” written two years before “Don Pasquale,” or his student melodrama “Il Pigmalione,” the work of an obviouisly gifted lad of 19? “Il Pigmalione” is the transformative love story from Ovid that G.B. Shaw borrowed for his own “Pygmalion” and Lerner and Loewe turned in to the musical “My Fair Lady.” 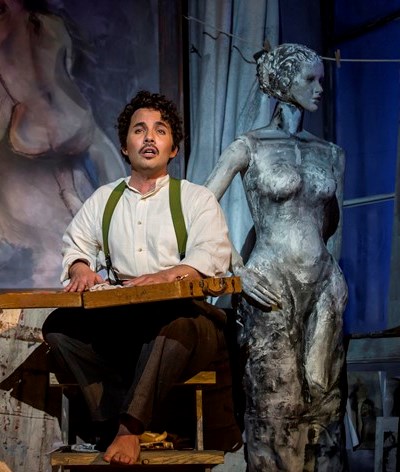 The pairing of these (almost) career bookends, which I saw April 20, suggested my second response: that under its new general director Douglas R. Clayton and new music director Lidiya Yankovskaya, Chicago Opera Theater is displaying renewed vigor along with a fresh and clear outlook.

These were lovely little productions: witty and characteristic, musically rewarding and ambitiously staged. Moreover, the two plays – for they were indeed very good theater – lent themselves quite well to the intimacy of the Studebaker, where Chicago Opera Theater will return for its first two shows next season (Tchaikovsky’s “Iolanta” and “Stefan Weisman’s “The Scarlet Ibis”) before finishing with Jake Heggie’s “Moby-Dick” back at the company’s longtime digs, the Harris Theater.

Young Donizetti must have had a good pal who was a fearless and stalwart tenor. Through first 30 minutes of its 40-minute duration, “Il Pigmalione” is effectively a monodrama. We see the statue Pigmalione has sculpted of the beautiful Galatea, but she will not materialize in the flesh until a brief, intensely lyrical and amorously heated denouement. 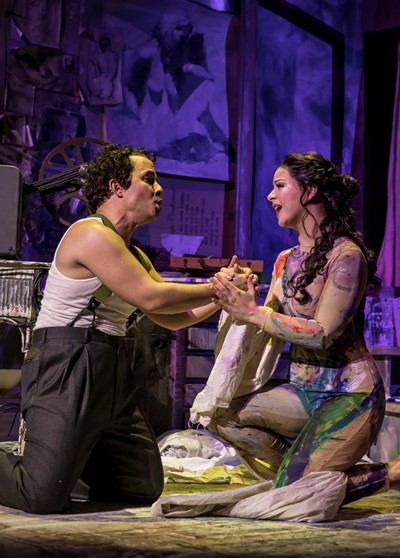 Until then, it’s up to the tenor (here Javier Abreu) to sustain the musical line, the drama and our interest. Emotionally, it’s pretty hyperbolic stuff, though at the same time the teenage Donizetti flashes the natural flair for vocal writing that would carry him to the heights in his own time and secure his place in the operatic firmament down to the present day.

To say that Pigmalione is obsessed with the near-mortal he has wrought from clay would be quite an understatement. He wishes desperately for her to awaken as his lover. He sees – or imagines he sees – her in a film-noir video projection. He agonizes over how near she is, and yet how painfully far. Abreu displayed an appealing voice and all the staying power required to get us to the moment of Galatea’s incarnation.

One might say that soprano Angela Mortellaro’s reward for the modest Galatea role was the flamboyant, sexy coloratura assignment of the title character in “Rita.”

Neither of these operas received a public performance during Donizetti’s lifetime. “Rita” finally reached the stage in 1860, a dozen years after the composer’s death. It’s a delightful farce, about a woman in spirited middle age who has rebuilt her life after the death at sea of her unsavory first husband. She has opened a café – Café Rita – and remarried, to a doofus called Beppe (Javier Abreu again) whom she freely and variously abuses. 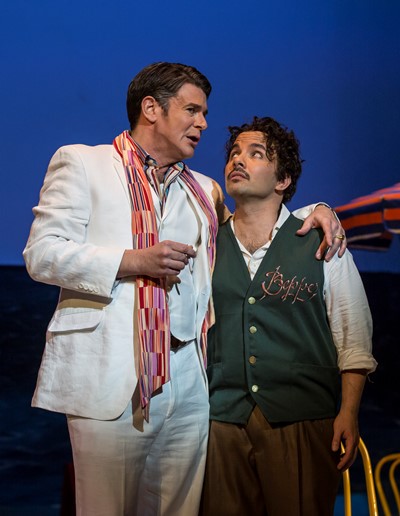 The plot turns wacky when Rita’s first husband (baritone Keith Phares, comically game and vocally assured) turns up very much alive, as surprised to stumble upon Rita and her charming café as she is to see him. But Beppe perceives the development as a possible way out of this trial of a marriage, and the two men get down to a gritty test of who’s ultimately going to be stuck with Rita. True love prevails, however: Beppe and Rita, it seems, really care about each other.

If you know “Lucia” or “The Daughter of the Regiment,” you have some sense of the vocal fireworks on display in this mature example of Donizetti’s art. And this time, the lion’s share of singing fell to Mortellaro, who tossed off florid lines with brilliant ease. She also proved to be a disarming comedienne.

In no small way, designer William Boles’ crisp and colorful set and Shanna Foster’s complementary costumes punched up the all-around good time of COT’s production. Director Amy Hutchison obviously had great fun with it, and conductor Francesco Milioto presided over stage and pit with equal parts of authority and esprit.