‘Jesus Christ Superstar’ at the Lyric Opera:
Toto, I think we’ve rocked on from ‘Carousel’ 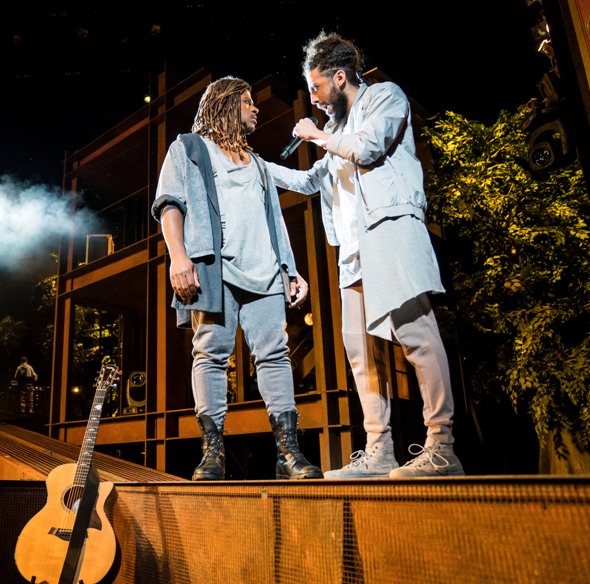 Review: “Jesus Christ Superstar,” by Andrew Lloyd-Webber and Tim Rice, at the Lyric Opera of Chicago through May 20. ★★★

It has been coming on for a while, the increasing élan with which the Lyric Opera of Chicago presents its springtime musical productions. This year’s outsize rock opera, “Jesus Christ Superstar,” launches with the shock and the thrill of a revolution underway, as dozens of young men and women in their athletic prime charge down the aisles and leap joyfully onto the klieg-lit stage. 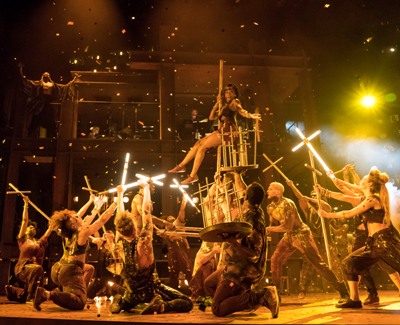 The din is already more than the wait-for-it crescendos in your typical Wagner or Verdi operas that grace the Lyric Opera stage, their romantic-era European trappings nobly intact. But vibrations to the very marrow of the bone are essential to the experience of this rock interpretation of the agony of Christ, portrayed by composer Andrew Lloyd-Webber and lyricist Tim Rice as the leader of an ecstatic youth movement of such overwhelming momentum that the old guard feels its existence threatened.

The frenetic choreography by Drew McOnie for 39 ensemble members – who pretty much never stop moving – is a primary force of energy throughout this show about Jesus’ last hours among his adorers and betrayers, as told in staged scenes around songs from the legendary rock concept album. 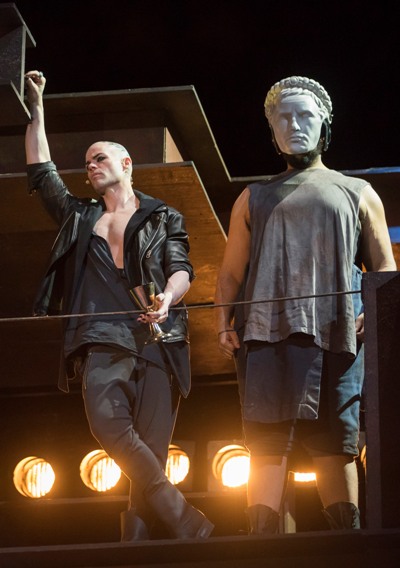 At nearly 50 years old, the Webber-Rice album’s herky-jerky storyline is an honored tradition. But the struggles and concerns of the disciple Judas, who is tormented over Jesus’ increasingly impolitic ways; the Jewish high priest Caiaphus, who fears all Jews will be made to suffer if Jesus is not crushed; and Pilate, the administrative chief of Judea, who tries to avoid being the executioner, emerge as particularly  vivid cameos in this production staged by Timothy Sheader. The savvy British director is a veteran of many shows at Regent’s Park Open Air Theatre in London, including “Jesus Christ Superstar,” “A Tale of Two Cities,” and “Peter Pan.” He knows how to think big.

Lyric’s opera productions – even those in English – are routinely presented these days with captions, in a nod to the present reality that not all visitors know the stories of “Traviata” and “Siegfried” and “Don Giovanni” by heart. For those unacquainted with the original 1970 “Jesus Christ Superstar” recording or one of its many West End, Broadway and tour adaptations – even those who missed the live April concert on NBC – the lack of captions will provide a lesson in what opera newbies once faced. Many in the crowd could have sung along with this show. But the truth is that, as in most rock concerts, the music was so loud the lyrics were generally unintelligible. 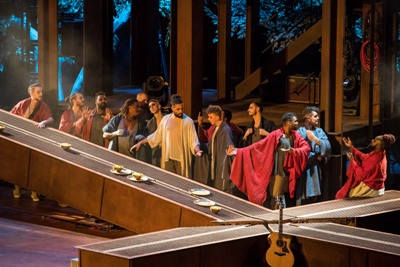 Heath Saunders, as Jesus, accompanied himself on guitar and presented an inward, brooding figure well aware of his imminent fate, as he did on NBC. Yet this Jesus was also the sun around which the entire cast and chorus, nearly 50 strong, circled in dizzying orbit. As the disciples lined up alongside their master in a freeze-frame homage to Da Vinci’s Renaissance painting of the Last Supper, the crowd in the auditorium applauded in delight.

But generally the show was absent ancient trappings in its exuberant fast forward to the muscular style and glittery look of today’s enormous rock festivals and stadium shows. Drenched in guilty silver, Judas’ own hands betray him. And 90 pounds of golden confetti showers Herod’s subjects spectacularly at every show, according to Lyric’s own numbers. 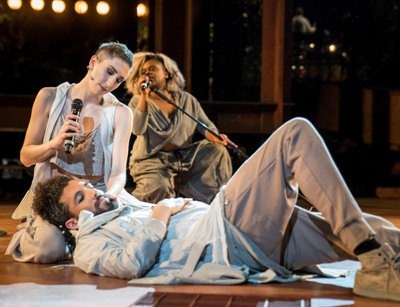 In a strong cast overall, Jo Lampert gave an exquisite portrayal of Jesus’ companion Mary, whose assurance that “Everything’s Alright,” when it clearly seemed not, was a musical balm. Michael Cunio, as Judea’s ruler Pilate, came across as a savvy leader who was well aware of the irony of his predicament in being forced to act; and Ryan Shaw, as Judas, brought the dismay of a loyal right-hand man who was losing his boss’ ear.

There was a time when Lyric’s general director Anthony Freud spoke carefully about the kinds of musicals the opera company would contemplate bringing in to anchor the opera company’s spring season – a real acoustical orchestra in the pit, etc. – in its desire to maintain a thread of continuity from the mainstream operatic tradition. To the extent that the Lyric’s opera orchestra voluptuously augmented the rock rhythm section of this score, one could argue that the thread still exists, if tenuously. 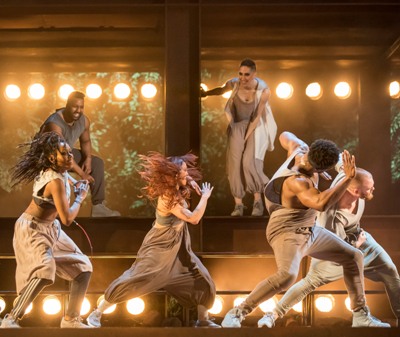 This “Jesus Christ Superstar” is certainly operatic in its grandiose theatrical setting, and its dramatic values are strong, even if its deafening sound has nothing to do with grand opera’s traditional acoustical profile. The lyric theater continues to evolve, with implications that the Lyric Opera of Chicago has clearly noted.

The ambition of this “Jesus Christ Superstar” production also points up the trimmed-back nature of many touring Broadway shows by comparison, and the company’s welcome emphasis on sophisticated choreography augurs well for next year’s May show, the dance-rich Bernstein-Sondheim “West Side Story.”