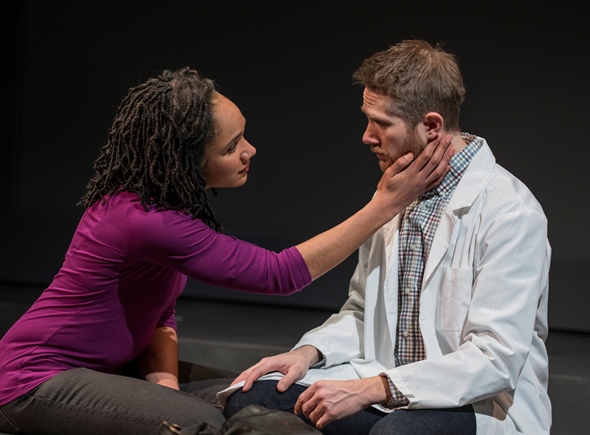 The smartest thing about Lydia R. Diamond’s play “Smart People,” now installed at Writers Theatre, may be the playwright herself. Diamond has a slashing wit and a ringing command of language. Whether “Smart People” adds up to all that much, or indeed whether it’s as fresh and imaginative as its high energy suggests, are other matters. 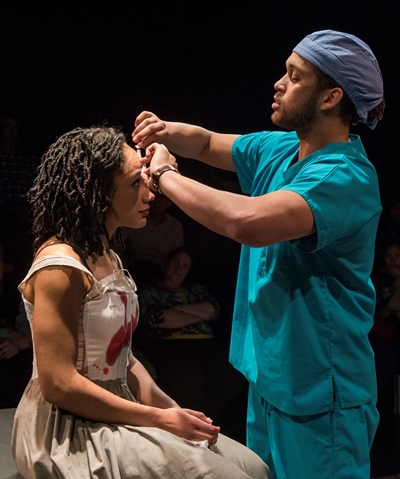 I might even say it’s “one of those plays” that interlace four characters who don’t all know each other at the outset but who become fully connected by the time the play – or the game – is over. From a different perspective, “Smart People” also could be construed as a less compelling echo of Ayad Akhtar’s “Disgraced,” about a successful foursome of thirtysomethings with unwitting racial issues, one of whom takes a very hard fall.

Indeed, unconscious – even inherently human — racial prejudice lies at the heart of “Smart People,” and, as in “Disgraced,” it is the  most brilliant of its characters who comes crashing down. In “Disgraced,” the unfortunate soul is Pakistani; here he’s white. What’s more, at the nadir of his despair and resentment, the shattered fellow in “Smart People” invokes the same hideous, racist turn of phrase heard in “Disgraced” – and I mean verbatim – to express his inexpressible self-pity.

All that said, the self-destructive character in “Smart People,” a neurobiologist, nearly provides reason enough to catch the play – certainly in Erik Hellman’s driven performance as a college professor bent on demonstrating through brain impulse measurements that we’re all just a little bit racist. He does just that, but of course the self-styled liberals at old Ivy U don’t want to hear any such proof, and it goes badly for the insistent scientist. 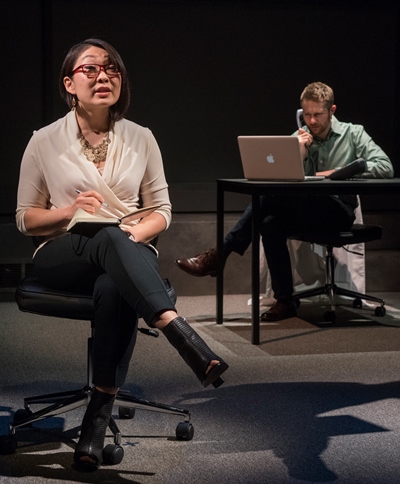 Hellman, articulate and wry, is fun to watch as the science department star who commits slow hara-kiri, destroying his own career in his conviction that he is right. Super-bright himself, the neurobiologist has little patience with students who can’t keep up and no accommodation at all for the protective school administrators who shun his findings.

We meet the professor first, in the opening flourish of what quickly develops into a collage of all four characters, a sort of round robin of discrete but overlapping introductions: an aspiring African American actress (Kayla Carter) scrambling to pay her rent, an Asian American psychologist (Deanna Myers) whose extra-clinical enthusiasms range from shopping to sex, and a young African American doctor (Julian Parker) who’s already beating his head against a biased system.

As their lives begin to intertwine by chance – we’re also into six degrees of Kevin Bacon here – we see what makes each character tick: the science professor is consumed by his racism project, the actress is madly auditioning, the psychologist is fitting her patients around shopping (and sex), the black doctor persists in the double fault of 1) being black and 2) telling his superiors exactly what he thinks. 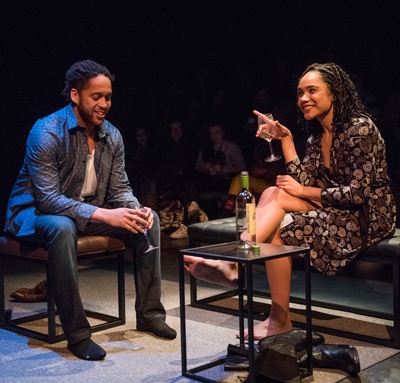 The play is set during the run-up to Barack Obama’s first-term election as president, which this little polling sample of four doesn’t augur as very likely. Meanwhile, they have their lives to live, rent to muster, patients to deal with (even if by phone while returning a blouse, without a receipt). The actress meets the doc when she goes to the clinic after injuring her head. The Asian American psychologist runs into the black actress at the same clinic and, what else, mistakes her for the doc’s receptionist. Only the young, fit doctor and the middle-aging professor already know each other – as gym rats who regularly go at each other in one-on-one basketball.

Doc quickly grows sweet on the actress, only to misstep pretty badly. The science prof and the psychologist hook up, and it looks like they might have a chance together – if he can just accept up front that she’s better than he is at everything. Clever as all of them are, they’re just as likely to make a mess as anyone else.

It’s a good ensemble, nicely woven by director Hallie Gordon and set quite simply by designer Collette Pollard. Call it an existential comedy. The four characters finally converge at a sort of last supper, when the neurobiologist’s star has fallen. The other three are there just to be supportive of the professor, who it turns out has one more major screw-up in him – in the aforementioned vile outburst.

And then, in a subtle denouement, amid the general televised rejoicing at Obama’s election, the now-dispossessed professor is reminded of just how accurate his data gathering on racism has been. The last proof is direct, empirical, personal and – as he has insisted all along – irrefutable.