On the theater aisle in Washington, D.C.: After three plays in three nights, I was seeing stars 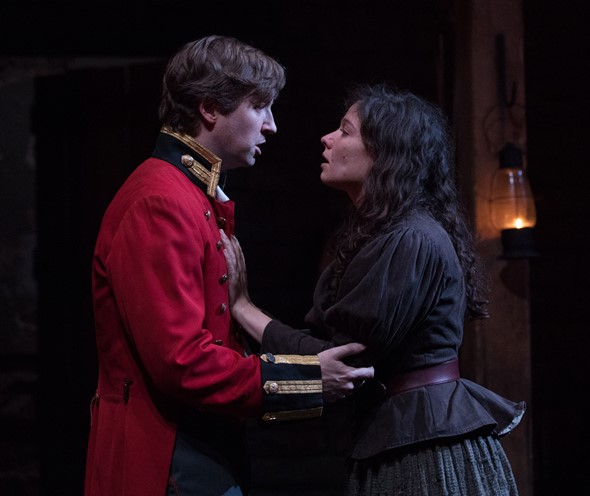 Review: It was like, well, being in Chicago – memorable stagings of plays by Wilson, Friel and Shakespeare at top D.C. companies.

WASHINGTON, D.C. – Call it a theatrical hat trick or a trifecta, but my recent three-night blitz of prominent stages in the nation’s capital produced impressive testimony to the quality of the theater scene here – even measured against the high regional standard of hometown Chicago.

And, lo, who should appear center stage at Studio Theatre on the final night of this sweep, in Brian Friel’s luminous and heartbreaking play “Translations,” but one of Chicago’s own – Brad Armacost, as the boozy master of a so-called hedge school in rural 19th-century Ireland. 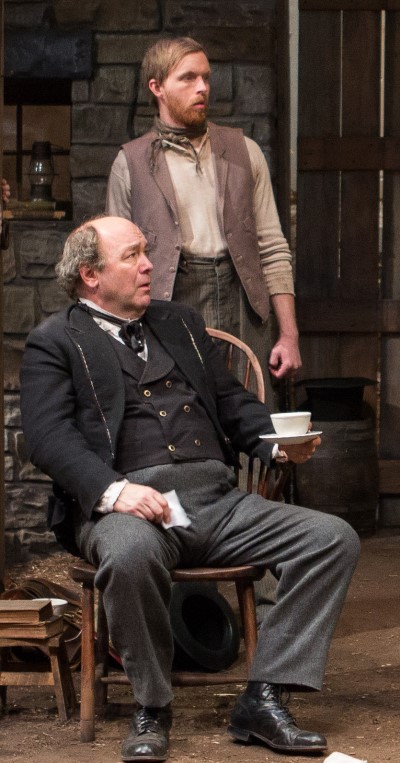 Studio’s earthy, lyrical production of “Translations” followed a richly textured and funny account of August Wilson’s “Two Trains Running” at Arena Stage and a roundly rewarding look at perhaps Shakespeare’s most bizarre play, “The Winter’s Tale,” at the Folger Theatre.

The intimate Studio space reinforced the raw directness of “Translations,” about Irish villagers in 1833 who must deal with the incursion of the British military sent to survey the countryside and “normalize” place names – which are all in Irish, the only language the locals speak, English being wholly unintelligible.

Actually, villagers who attend this particular hedge school, run by the scholarly if perpetually inebriate Hugh (Armacost), also have basic knowledge of Latin and even classical Greek. They can translate Homer and Virgil: From a rumpled pile in the corner, which proves to be Martin Giles’ endearing Jimmy Jack, emerge confident lines of “The Iliad” in Greek. But English – forget it (or whatever the phrase is in Irish).

The headmaster and his two grown sons, however, do understand and speak English. One son, Manus (Matthew Aldwin McGee), helps out at the school. The other, Owen (Erin Gann), has been away but makes an unexpected return as translator for the British expeditionary force.

“Translations” is also a cross-cultural, ill-starred love story involving the Irish lass Maire (Molly Carden) and a young English soldier (Cary Donaldson). Between them lies a vast gulf of incomprehensibility: yes, that wide. What’s so funny to us viewers is that while both Maire and her adoring soldier speak their lines in English, we know that what he’s hearing is Irish and that she hasn’t the foggiest idea of what he’s saying. But they’re drawn to each other, and Carden and Donaldson made their exasperation and their determination a touching delight.

As Chicago audiences know well, Armacost is an old hand at Irish theater, and at the Studio he absolutely submerged into the authoritarian scholar ever on the lookout for a fortifying nip. It was a radiant performance, gritty, fulsome and sad.

Director Matt Torney allowed the actors the breadth of time required to frame the pace of village life: an expansive perspective, at once loving and true – down to Debra Booth’s rough-cut set design and costumer Wade Laboissonniere’s well-worn country weeds. 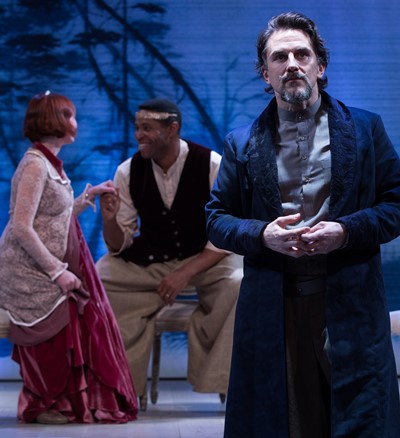 Likewise, the Folger’s notably coherent and credible – and very amusing – “Winter’s Tale” reflected the invisible hand of director Aaron Posner, who also boasts solid Chicago connections. If this problematic romance can be called dark comedy, it follows a course rare in that genre: It commences with a plunge into tragedy, only to soar into merriment before ending with an amazing turn of fortune.

Shakespeare’s tale makes a big demand on the viewer up front: belief that a king (Leontes) who implores his lifelong best friend to extend his visit, without success, might fly into a jealous rage when his wife – at his own urging – actually persuades the fellow to stay. The king’s madness (for truly he goes off the deep end) begins with his incensed observation: “Too hot, too hot.” That is, Leontes thinks his pal (King Polixenes of Bohemia, the formidable Aldo Billingslea) and his own queen (Katie deBuys) are coming on to each other. In a twinkling, the mistaken Leontes boils over into rage.

Like Leontes’ queen and their guest, we have some difficulty processing this sudden eruption. But Michael Tisdale brought enough gravitas to Leontes that his raving seemed almost plausible. Then, of course, when he has forged instant chaos and ruin and repudiated the judgment of the gods, Leontes turns suddenly clear-eyed and penitent. Tisdale managed all this more persuasively than I have hitherto seen. 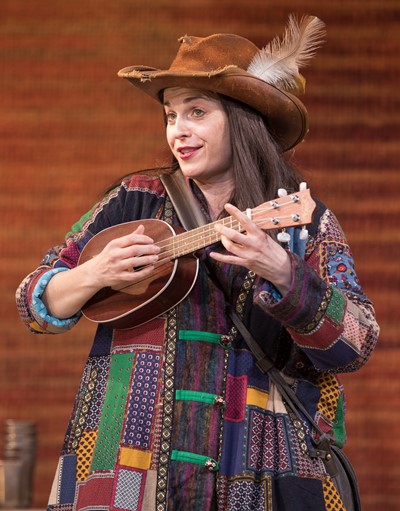 Then the play leaps ahead 18 years and relocates afar to the countryside of Bohemia, where the progeny of Leontes and Polixenes meet, unaware of their shared royalty, and fall in love. If anything, this seeming digression into comedy amid the rustics poses a greater challenge to continuity and engagement than the crazy events of Act 1.

But Posner made it great fun – not least in the person of Kimberly Gilbert as the career lowlife and thief Autolycus. Called upon at a sheep-shearing festival to offer a song, but only a clean song, Gilbert’s disguised cutpurse settles on a ditty about a mermaid – but at every implicitly bawdy rhyme substitutes a “clean” word that doesn’t fit at all:

There was a young sailor
Who looked through the glass,
And spied a fair mermaid
With scales on her… island

And caused her
To tickle and itch.
The sailor cried out
“There’s a beautiful…mermaid.”

And so on. through many hilarious verses. Though the song has been around a long time, it doesn’t go back as far as Shakespeare, but it was deliciously apt and Gilbert brought down the house. No doubt the Bard would have loved it, and for that matter surely would have thought well of the Folger’s entire effort on behalf of his very curious tragical-comical-pastoral drama.

Both “Translations” and “The Winter’s Tale” profited from well-integrated acting companies, but the ensemble gem was August Wilson’s “Two Trains Running” at Arena Stage, directed by Juliette Carrillo. 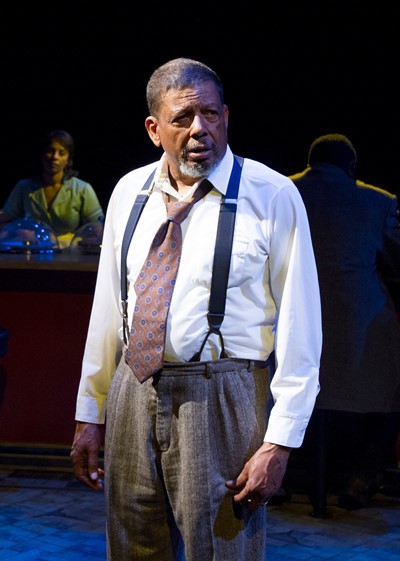 “Two Trains” occupies the 1960s niche in Wilson’s cycle of 10 plays embracing the African American experience, decade by decade, throughout the 20th century. Like most of the others, it’s set in Pittsburgh, in a section of town where black businesses are being squeezed out by the irresistible forces of gentrification.

Memphis (played sternly albeit with a hint of vulnerability by Eugene Lee, the same who penned “East Texas Hot Links” ) owns a failing diner frequented by a small cadre of longtime customers. The city wants to buy Memphis out, but won’t meet his price. He wants $25,000 and not a penny less. West, a well-to-do undertaker (William Hall, Jr., in an elegantly contained turn) who owns several buildings in the neighborhood, has offered Memphis $15,000. Nope. 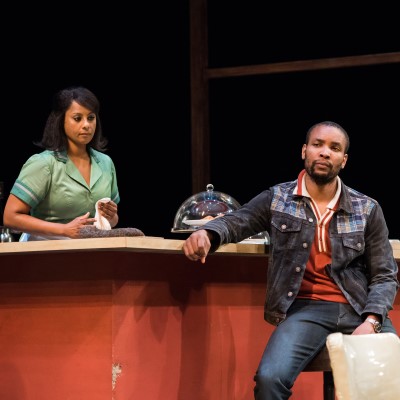 The characters of “Two Trains Running” essentially form a neighborhood family. Everyone matters, everyone speaks his (or her) mind and no one takes a back seat. Memphis may be The Man, but then West comes in for his slice of pie, and the whole room defers to him. There is no star. It is a colloquy, a chamber ensemble playing Mozart: Everything must remain in balance or the whole piece collapses.

Arena’s “Two Trains” was disarming in the humanity of its characters, their warmth and truth and mutual affection. Beautiful work by a troupe of actors polished to a casual edge.

Oh, the title. Memphis keeps saying that one day he’ll get back to Mississippi where he came from, and where he has claim to a goodly piece of land. There’s a train runs down there, he says. Two trains running now.

The play continues through May 6 at Arena Stage. “Translations” runs through April 29 at Studio. “The Winter’s Tale” at Folger has closed.