‘You Got Older’ at Steppenwolf: In a theatrical clinic, Francis Guinan lifts play to higher level 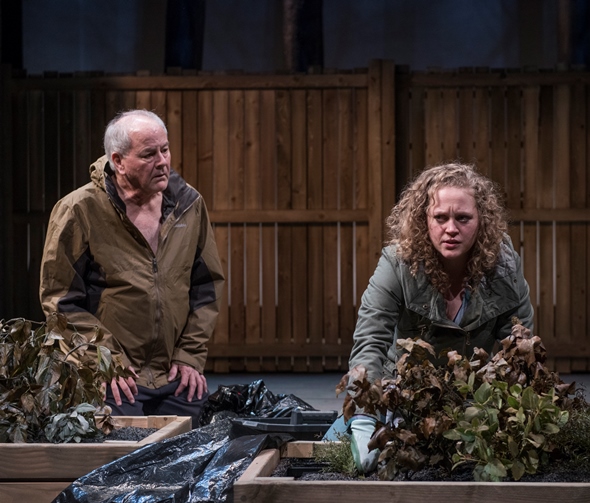 Review: “You Got Older” by Clare Barron, at Steppenwolf Theatre through March 11. ★★★

Clare Barron’s shadow-streaked comedy “You Got Older,” about a father’s death and a daughter’s transfiguration, is an oddly – I might even say deceptively – unsatisfying play.

The real reward of Steppenwolf Theatre’s staging directed by Jonathan Berry, and the only thing that might draw me back to see it again, is the ever-luminous Francis Guinan’s performance as a loving father fighting a losing battle with cancer. 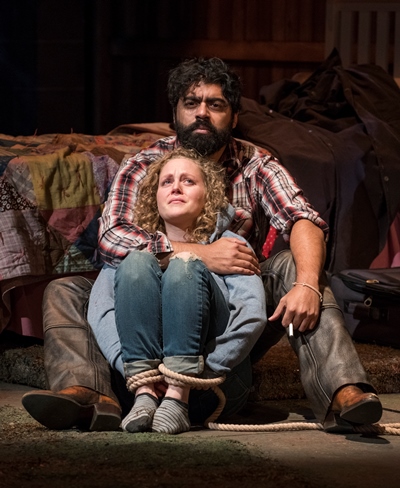 Despite the central, gimmick-bolstered character of thirtyish, flailing daughter Mae (Caroline Neff in an empathic performance), one could argue that the actual protagonist of this ambiguously titled play is the young woman’s father.

You got older. Who exactly – I mean apart from everyone in sight – got noticeably, significantly older? No one says that to Mae, though she’s doubtless feeling some beat-down from what has felt like a long year. Her boyfriend has dumped her and she has lost her job with a law firm. To a guy she has just met, she blurts out – in despair – that she hasn’t had sex in 41 days. And every night she dreams about a feral hunk of a cowboy (the broad-chested, slow drawlin’ Gabriel Ruiz) who visits her bed to assuage her loneliness.

Mae’s dad certainly has aged. He’s ill. That’s why she has come home, and why her sisters Hannah (Audrey Francis) and Jenny (Emjoy Gavino) and brother Matt (David Lind) have assembled with her. Beyond garden-variety banter among adult siblings reminiscing about Dad and times past, moments lost, not a lot stirs in those pages of dialogue. 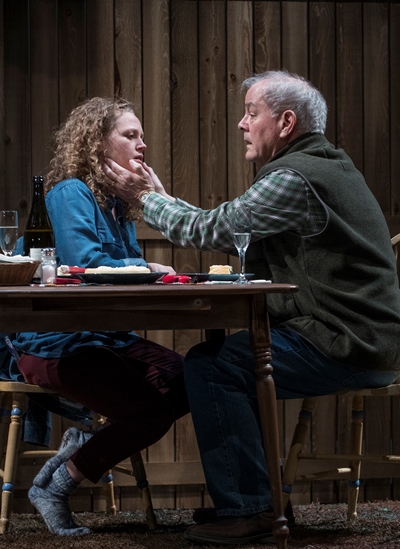 But Mae’s scenes with Dad are of a different order; they explore deeper veins of psychology, relationship, raw truth. Largely, it is Barron’s writing for Dad that animates and illuminates those encounters, which generally feel more like confrontations – because miserable Mae doesn’t want to hear it all again, the little suggestions, the probing questions, the parental wisdom.

And Guinan is such a terrific Dad: concerned but cautious, wanting to help his daughter get over this hump but fully aware that almost anything that passes his lips will land as criticism. Even if Mae doesn’t want to square her shoulders up to her situation, Dad knows that she has no choice if she is not to drown in the pool of her own inertia.

Young actors would do well to watch Guinan negotiating the tricky landscape of a father advising his grown daughter. How do you blaze that path? Well, you might offer a taste of a green pepper from your new garden, the little hobby that has helped to make life bearable since the death of your wife, your daughter’s mother. And you don’t quite look your daughter in the eye while you’re talking. The subject, after all, is peppers.

Just peppers? Mae asks. Yes, for now, he says. Maybe next year he’ll try something else. Dad tells Mae he has some hard questions for her, but that can wait. Still, he is going to ask them, and she needs to know that.

One, not surprisingly, is whether she has any job prospects. Actually, she has an interview that afternoon – via Skype. Shouldn’t she be preparing? No, no, she says, it’s not that big a deal. She can meet with them in person later. Well, mutters Dad, it just seems…But Mae shuts him down. 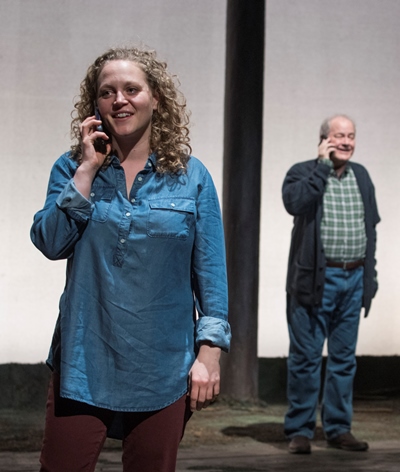 This is not the place to spell out where it goes, but the progression of these father-daughter chats is palpably real, and what makes the dialogue so compelling is Guinan’s valiant effort at authenticity – walking that tightrope between what his daughter needs to hear and what she will tolerate from her parent. The aura of perilous urgency is only accentuated by Neff’s measured reaction, which is to say the reflexive evasions of a child who is no longer a child.

It’s potent stuff, consummated in their last exchange, when alterations have come to pass and Mae and Dad are again in different locales. He calls her on the phone with news too awful to utter, and indeed he cannot. She, the daughter older now in more than years, meets her father soul to soul and asks, “Do you want me to say it?”

One could almost imagine the play ending there, but it pushes on to a final reunion of the siblings, whom we find in an ecstatic dance reminiscent of the Council war dance that crowns Tracy Letts’ “The Minutes,” staged earlier this season at Steppenwolf. But whereas the scary finale in Letts’ play had a surreal context, this only feels forced and anticlimactic – feverish action in the place of that timeless currency of the playwright’s realm, words.