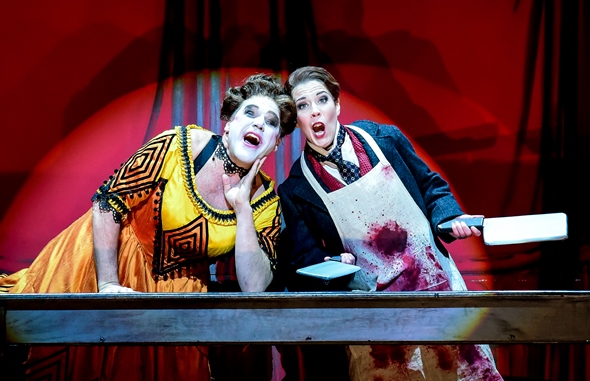 Through the 20th and 21st centuries, composers and librettists have pushed opera in exciting and unexpected directions, proving again the flexibility and richness of this enduring art form. A fresh example is Kevin Puts’ “Elizabeth Cree,” which offers something almost never seen before – a bloody, fast-action operatic thriller with a juicy plot twist.

Presented in the ideally sized, 691-seat Studebaker Theater in the Fine Arts Building, “Elizabeth Cree” is one of the most successful offerings from Chicago Opera Theater in recent years. The 95-minute chamber work received its premiere at Opera Philadelphia in September 2017. 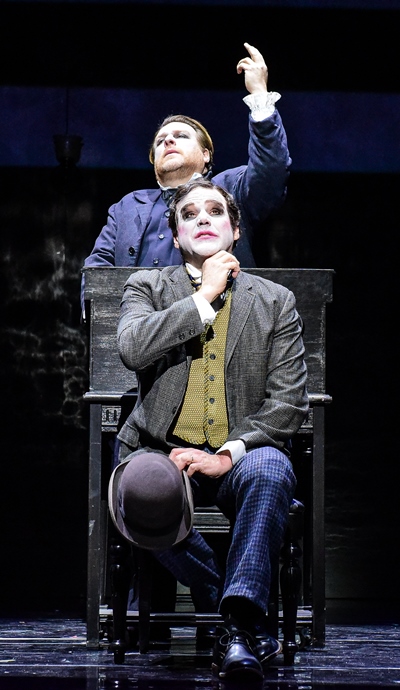 Puts’ opera, an adaptation of Peter Ackroyd’s 1995 novel “The Trial of Elizabeth Cree,” is set in the dark world of Jack the Ripper’s London. It centers on the title character’s murder of her husband John and a simultaneous series of gruesome slayings by a serial killer. (Elizabeth’s body is seen hanging from a gallows as the production opens.) Two inter-related plot lines develop at a London music hall, where Elizabeth became something of a stage star as Lambeth Marsh Lizzie, and in the Reading Room at the British Museum. Some of the serial killings are strangely related to the museum, which sees such regular visitors as a wild-haired Karl Marx (bass-baritone Zacharias Niedzwiecki).

The story does not unfold in a linear fashion, but instead jumps back in forth in time among four poles of action. A structure of prologue and 29 scenes might seem like a recipe for a jumbled mess, but prolific librettist Mark Campbell manages to bring logic and clarity to the seemingly disparate threads of the story and fit them all together neatly.

And to his credit, director David Schweizer engages in no undue flights of fancy but simply tries to convey this story in a compelling, understandable way that maintains the suspense. At times, characters and set pieces literally swirl on and off stage, offering a kind physical manifestation of the way the scenes cascade into each other in this fast-moving narrative. 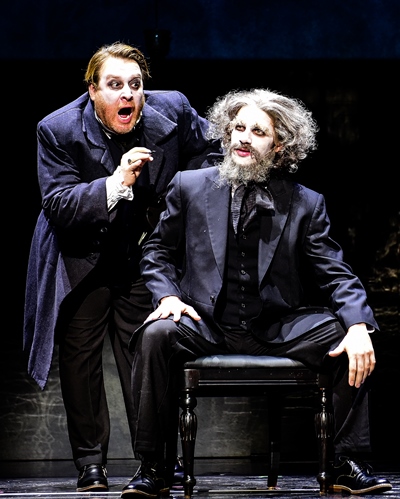 An off-putting aspect of this opera, at least to me, is the unnecessarily grisly descriptions of the murders. As John Cree reads these accounts from his diary, the words appear in a projection on the back wall in a Victorian cursive – a clever touch (credit projection designer Alexander Nichols). But those words soon give way to a projected shadow theater, which crudely shows the killings and ends with splatters of blood – both of which even in their cartoon-like fashion are too graphic by far.

That said, Campbell makes a point of off-setting all the blood and gore with humor – mostly gallows style, as might be expected – and heart. An undercurrent of sadness runs alongside the evil doings in this opera, as the audience gets quick but poignant glimpses at the back story of the central characters.

This co-production with Opera Philadelphia features scenery designed by David Zinn. The main element is a wallpapered Victorian box, inspired in part by 19th-century English music halls, into which an ever-changing series of set pieces are inserted and removed. What is missing from the almost exclusively interior environments is a skyline or something that suggests the bigger, threatening world of London where the serial killer roams. (At the performance I saw, the stage effects were compromised by a distracting hall light that streamed in from the side boxes; the doors or curtains to those seating areas apparently had not been closed.)

While a few scenes look a bit lean, it appears as though no expense has been spared on the striking costumes which Zinn also designed. They range from the proper Victorian finery worn by the Crees to the smile-inducing, appropriately theatrical yellow and red stage outfits of the vaudeville performers. 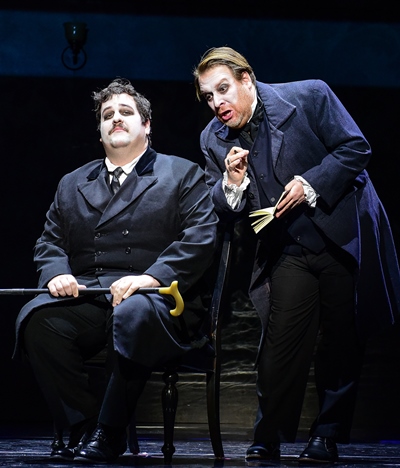 After devoting much of his career to instrumental music, Puts, 46, has emerged as one of this country’s most dynamic operatic composers since his highly successful debut in the form – “Silent Night,” which earned him the 2012 Pulitzer Prize for music. Although his music is firmly based in tonality and he knows how to turn a stirring, soaring line, there is nothing backward-looking or saccharine about his writing. While his operatic scores might not be as groundbreaking as those of, say, Kaija Saariaho or Thomas Adès, there is nonetheless an engaging freshness and edginess to his music.

Puts knows how to shape a drama: He has instilled “Elizabeth Cree” with a rhythmically propulsive forward momentum that is ably realized by conductor Geoffrey McDonald. At the same time, the score fully capitalizes on the 16 musicians in the pit, making savvy use of the synthesizer and low-voiced contrabassoon and bass trombone to create the eerie atmospherics of London’s seamy underworld. The composer also knows when to draw back, accompanying certain sections of John Cree’s diary readings with just piano, giving them a chilling intimacy. 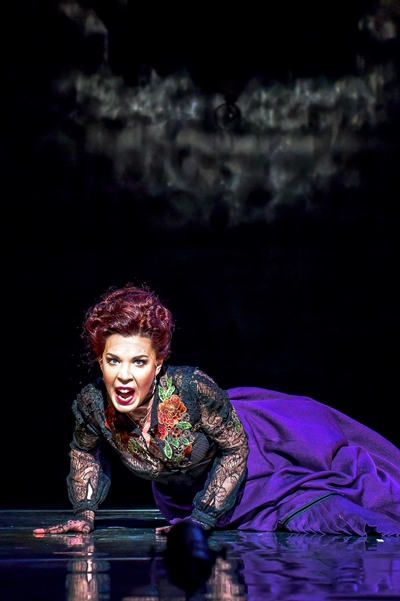 Mezzo-soprano Katherine Pracht effectively anchors this production as Elizabeth Cree. She brings ample dramatic weight to this complicated protagonist, along with the versatility to jump from the stage of an English hall to a grim courtroom interrogation. Pracht possesses an admirably powerful voice with solid technique, and an attractive lower register that is particularly suited to this role.

Puts gives some of his most spellbinding writing to the tortured character of John Cree, who ranges from manic histrionics to quiet contemplation as he delivers his diary readings. Baritone Christopher Burchett is equal to the task, delivering some of the most memorable singing of this production. He displayed a full, expressive voice highlighted by a soft falsetto that took on an affectingly delicate, plaintive quality at times.

The most effective overall performance, though, arguably comes elsewhere with tenor Richard Troxell in the role of Dan Leno, a famed music-hall comedian in the late Victorian era. Leno serves as the opera’s moral center. It’s a demanding part requiring a singer who can pull off Charlie Chaplin-like stage hijinks and also deliver the opera’s most affecting aria, a lament about the evil pervading the world. With his instinctive comic timing and wonderfully multifaceted voice, Troxell totally embodies the character’s wit, complexity and humanity.

“Elizabeth Cree” probably won’t change the course of American opera, but this engrossing and nicely scaled work is likely to see revivals by many professional and academic companies across the country. 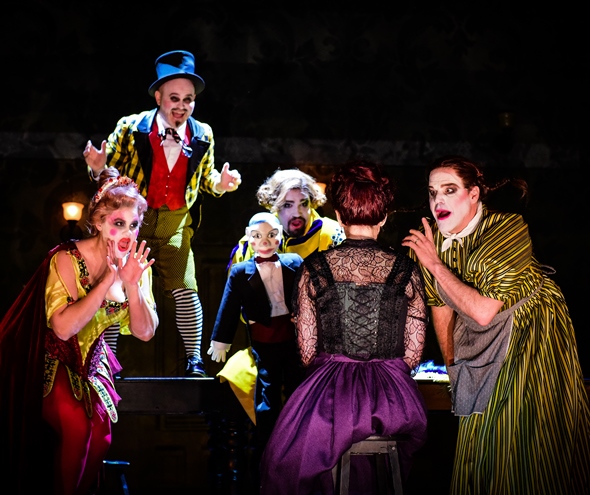