‘The Heavens Are Hung in Black’: In predawn of Emancipation, Lincoln suffers war and loss 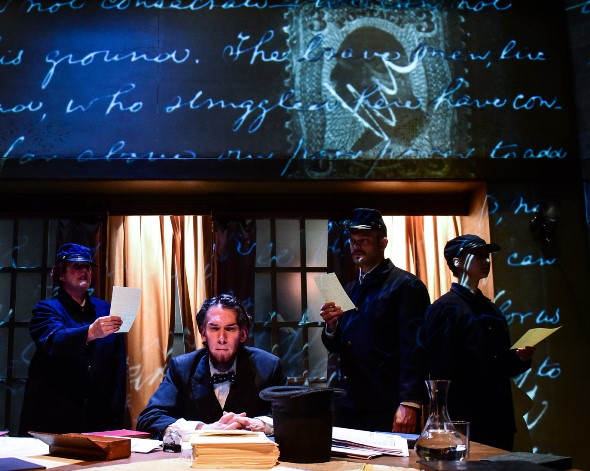 Review: “The Heavens Are Hung in Black” by James Still, produced by Shattered Globe Theatre at Theatre Wit through Oct. 21 ★★★★

Chicago’s young theater season has raised the curtain on a genuine sleeper: a gem of a play, James Still’s “The Heavens Are Hung in Black,” produced by a little company, Shattered Globe Theatre, on a tiny stage at Theatre Wit. At the center of a splendid ensemble effort is Lawrence Grimm’s exquisite and wholly credible portrayal of Abraham Lincoln. 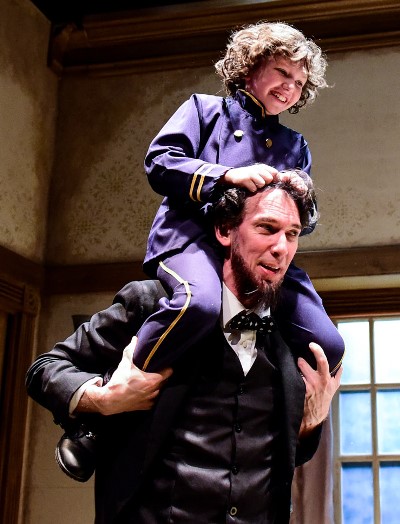 Set in the spring and summer of 1862, when the Civil War was going badly for the Union, “The Heavens Are Hung in Black” traces Lincoln’s months-long agony over the question of emancipation, and whether slavery was at first even a central issue of the war – for him or for the South.

While Still’s play draws on some of Lincoln’s most famous quotations, it – dare I say – transcends the historic persona to show us a lawyer from Springfield, as folksy as he is astute, catapulted to the highest office of the land and reeling under the weight of difficulty now heaped upon him. What is the crux of this war? Lincoln asks himself again and again. To his mind it is first and foremost about the inviolability of the Union. Yet, inescapably, the loathsome practice of slavery must be confronted: Of course it must, he says almost off-handedly: “As I would not be a slave, neither would I be a master.”

“The occasion is piled high with difficulty, and we must rise with the occasion,” Lincoln said to the United States Congress on Dec. 1, 1862. “As our case is new, so we must think anew, and act anew. We must disenthrall ourselves, and then we shall save our country.” 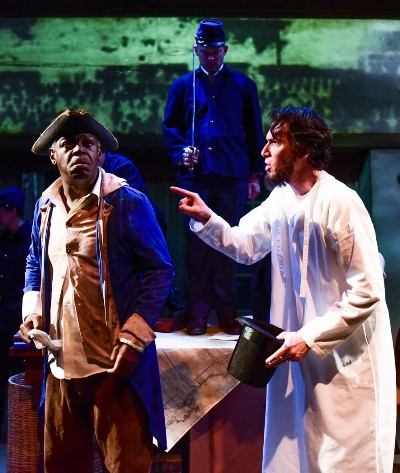 He was a rare man, this tall, narrow figure whom few would have called handsome, this careful thinker whose deliberate speech reflected his upbringing in Kentucky and southern Indiana. Husband, father, commander in chief, not always in that order, Lincoln surely was a man very like Grimm’s flesh-and-soul portrayal.

Grimm is tall and wiry, an essential starting point for any actor who would play the 6-foot-4 Lincoln. But it’s Grimm’s unself-conscious habitation of this American paragon that is so convincing. One moment, he’s romping with his little son Tad – amid cabinet counselors wrangling about the conduct of the war; in moments of solitude or in troubled sleep, the man to whom an entire country is looking for its salvation is himself terrified, distracted, unsure, fleeing back to the certainty of peaceful Springfield and visits with friends now gone.

Whether he’s awake or dreaming, and very often neither he nor we are entirely sure which, Grimm’s Lincoln is feverishly preoccupied with a war that booms just across the Potomac. He argues with a wraith-like night visitor, Confederate president Jefferson Davis (proud and self-assured in the person of Don Bender), about the reason for the South’s secession. He gets a new perspective on American history from a 109-year-old black man (an infectious turn by Darren Jones) who served with pride under General Washington back in the day – served in the place of his owner, but with a clear sense of personal investment all the same. 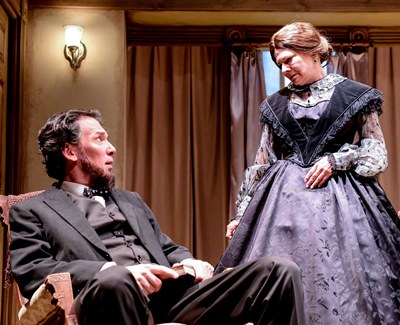 Never far from Lincoln’s mind – and often hovering near his office door – is his wife, Mary Todd, to whom Linda Reiter brings a blazing intensity that caroms into manic anxiety. Reiter’s Mary Todd chafes under the cosmic cruelty of their son Willie’s recent death after an illness. She speaks of him as if he were still alive and filled with youthful vigor. In the midst of an all-consuming crisis unlike anything the young nation has seen, the president tries to reassure his wife. It is to director Louis Contey’s credit that Mary Todd’s heartbreak and Lincoln’s compassion meld into a household’s honest grief.

On the periphery of these desperate times, in the shadow of the White House, looms the poet Walt Whitman as commentator, observer, Greek chorus. Tim Newell’s measured narrative as Whitman lends the play a precise accent of historical place and time, and underscores its moral rigor.