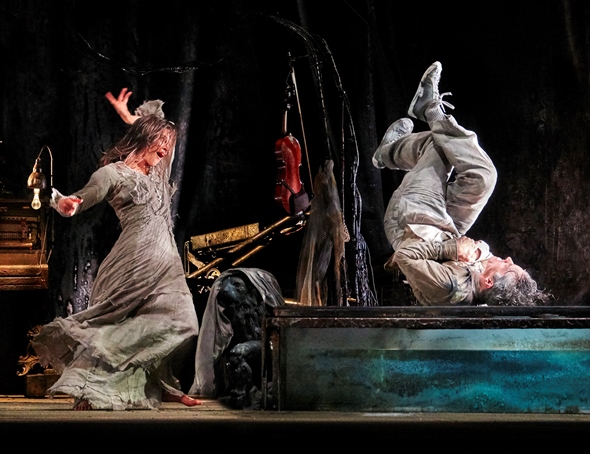 The first theatrical exhibition in Chicago Shakespeare Theater’s impressive new modular venue, called The Yard, reminded me of the head-spinning effect of economic inflation. Take the candy bar. The same confection that cost a dime when I was a kid seems like a bargain at a dollar now. Anyway, there I was, in CST’s grand $35 million house taking in a circus comedy that I might have seen under a bigtop for 35 cents when I was a lad. 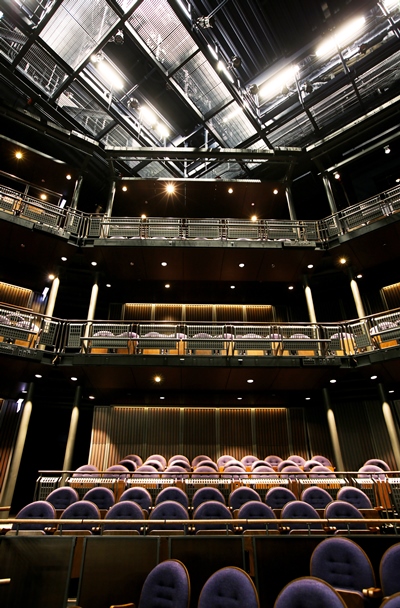 But the ephemeral value of cash wasn’t my only preoccupation during The Yard’s debut show, a sort of vaudeville-and-circus comedy revue from France titled “The Toad Knew.” As the delight peaked around the first hour mark, and then as I sensed the audience recede into quiescence as the once-funny physical jokes recurred over the remaining 45 minutes (sans intermission), I was put in mind of the aura of importation. Yes, the crowd packed into The Yard’s 850 seats was responding less and less to the visiting company’s herky-jerky movements, raucous antics and interpersonal entanglements, but the players were French. It’s not so bad if you can experience boredom as ennui.

For this coming out, one might have hoped for an imaginative Shakespeare production from, well, Chicago Shakespeare Theater. But CST opted for the entertainment of French circus veteran James Thierrée’s “Le grenouille avait raison” – rendered approximately as “The Toad Knew,” though “The Frog Had It Right” would be closer. While a grandiose, silky white inflated toad/frog makes an appearance at that show’s end, what it “knew” or correctly surmised remains a mystery. 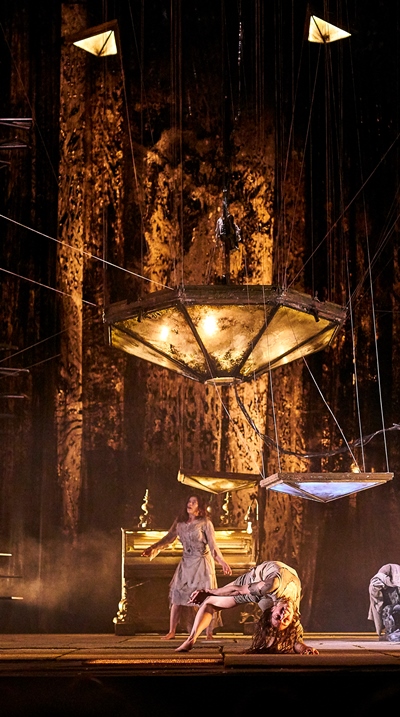 Much like any series of circus gags, “The Toad Knew” has no plot; it’s just a clever concatenation of tricks and schticks pulled off by Thierrée and five very skilled collaborators – two men and three women – who constitute La Compagnie du Hanneton. There’s a modest component of aerial work, but mostly the show plays out on the ground – and in a large square, knee-deep pool of water. The really interesting aerial aspect is a large mobile-like installation whose separate elements bob and swing and rotate in vaguely ominous fashion.

When the great pianist-comedian Victor Borge was 90 years old, I interviewed him by phone. I’d seen his routines countless times over half a century. As we chatted, he trotted out the same old jokes, and I genuinely laughed at them again. The guy was funny. So is Thierrée, a master of physical clowning with phenomenal control over every fiber of his body. He’s a mime’s mime. And he’s surrounded by disciplined acrobat-contortionists whose superhuman agility is a wonder to watch.

But if you’ve been to a circus, if you’ve seen old vaudeville footage, or if you remember the Ed Sullivan Show on television, you’ve seen these routines: the guy whose hands, concealed within his cloak, seem to take on a life of their own as they keep popping out of pockets; the piles and piles of plates that several players keep passing off to each other – until the plates all go crashing to the floor and one of the players busily scoops them onto a steeply angled tray from which they slide right back off; the violin that one player tries to hand to another but can’t because it’s stuck to his hand – until it isn’t, and then he takes it back only to be stuck to it again.

One of the troupe’s best gags is the old entanglement routine. Doubtless the Greek soldiers amused themselves with it during the siege of Troy. It’s still funny. Two players clasp hands and begin stepping over, around and through each other in a futile attempt to disengage as they become more intertwined. LOL stuff. The house howled.

But the production outlasts its material, by half. True, Thierrée’s fine company got half a dozen curtain calls. A testament to the nimbleness of his players. They could be back on stage in a twinkling. 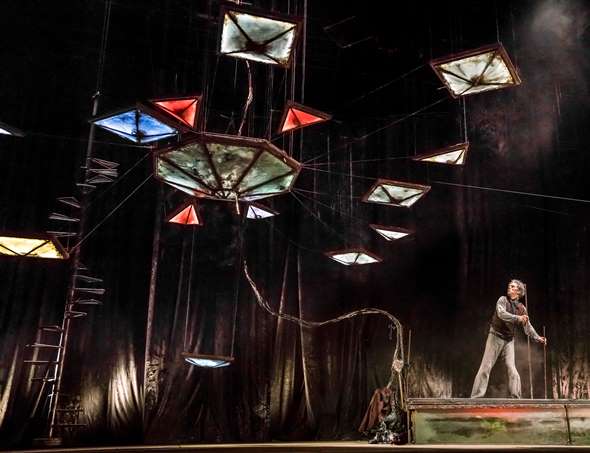