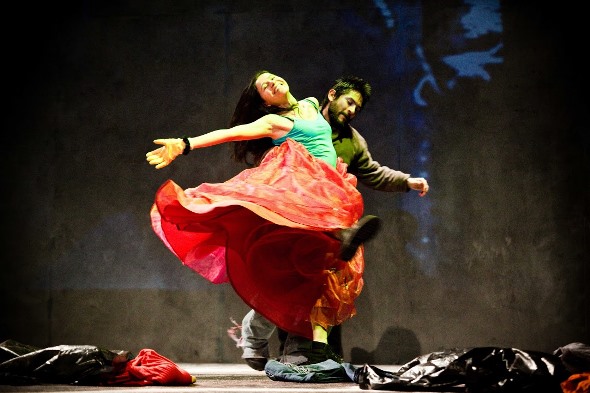 Additional offerings include Victory Gardens Theater and Teatro Vista (in partnership with CLATA) present Tanya Saracho’s Fade and CLATA and Chicago Shakespeare Theater’s co-presentation of the Chicago premiere of Teatro Línea de Sombra’s Amarillo as part of the Theater’s World’s Stage series. Tickets are now on sale and are available for purchase at clata.org/festival-schedule.

“I, the Worst of All,” in such words defined Sor Juana Ines De La Cruz herself when signing with her own blood the formal abjuration of her life and work –while the Old and New World praised her as “The Tenth Muse,” “The Phoenix of Mexico.” De La Cruz lived in a dying century that refused to perish and as such enhanced its bigotry against her talent and thirst for knowledge. In the attempt to conciliate her will and her freedom, she dared to share her mind and was punished as consequence. She died from being silent, while her voice on behalf of women transcended oceans and ages.

What cause or excuse could any person give to try and justify what is considered to be the worst of all crimes — killing your own children? Pabón interviewed women who committed matricide to try to understand their reasoning. Interviews helped the author create a new character of Medea, and provide the audience with an alternative view. People may leave the theater not judging this woman’s actions, but instead feeling pity toward her.

After two years of building Teatro Luna West: Los Angeles and strategic and restorative justice development for Teatro Luna Chicago, participation in theater festivals around the globe, and training with master artists to deepen their trademark methodologies and ensemble-practice, Teatro Luna returns to its hometown of Chicago with a brand-new original ensemble-devised performance tackling the current spectrum of violence inflicted on our bodies and the policing of our spirits with Lovesick. Rage, laugh, cry, and then wake up inside these 70 minutes of heightened theatrical adventure filled with original music, movement, and story. We fully intend to mourn, resist, and both decry and celebrate the complexities of our American lives today. Don’t call it a comeback, it’s a homecoming.

Although Death and the Maiden has been performed in Chicago in English in recent years, this production is performed in Spanish with English supertitles. It is the first production of Aguijón Theater’s 28th season, dedicated to the exploration of the psychological toll of the politics of fear. A show fit for our current turbulent times.

When Johnny Gonzales is forced to clean out the apartment of his recently deceased younger brother Cisco, he discovers a treasure chest of private, personal notes that Cisco has left behind. The notes are pages and pages of events that happened in the past. They represent Cisco’s innocent interpretation of love, life and everything in between. When Johnny begins to read these notes, an unexpected healing process begins.

A man—any man—departs Mexico for a land of dreams: Amarillo, Texas. But he never arrives. Far away, a woman reconstructs his journey, imagining what might have transpired not only for him, but for the thousands of other faceless men and women who have taken the same path—and for those who were left behind. Told through projected images, monologues, movement, and a collage of atmospheric settings evoking layers of national and individual identity, Amarillo is a naturalistic portrait of one (or any) immigrant’s efforts to reach something, somewhere, better.

A mother’s love knows no boundaries. Over the course of two evenings, mother and son, two estranged generations of Dominicans living on the north side of Chicago, attempt to rekindle the love and appreciation for each other and their roots; but unexpectedly revealed intimate secrets threaten to destroy an already thin bond.

El Espejo (The Mirror) is the rescue of Cuban traditions united with elements of universal theater. This production brings sounds of indigenous musical genres such as chachacha, bolero and rumba accompanied by their respective dances. While the text that inspired this work, El Peine y el Espejo, is revived from 1956, the topics of machismo, gender violence, family and religion are matters still very much present today.

Victory Gardens Theater and Teatro Vista (in partnership with CLATA)

In this witty behind-the-scenes drama, Mexican-born Lucia is hired to write for a ruthless Hollywood TV series. She soon discovers that the Mexican American custodian, Abel, has a windfall of plot ideas. As their friendship grows, his stories start to blur with hers, leading to unexpected consequences.

Meet Juan(ito) Doe is a Free Street production by Ricardo Gamboa and co-directed with Ana Velazquez. MJD is a play based on the experiences and stories of Chicago’s omnipresent but underrepresented Mexican-American and immigrant communities and was created by Gamboa, Velazquez and an ensemble of Chicago Mexican-Americans.

The action of this European play is shifted to Colombia to explore the power relationship between the United States and Latin America and will speak to a diverse audience of different backgrounds. Audiences are invited to witness a slice of Colombia, complete with live traditional folk music, salsa and rum. The text is spoken in both English and Spanish, and contains heightened physicality and original live music.

Single tickets to most performances are $25 for general admission, and tickets to Teatro Línea de Sombra’s Amarillo begin at $25. Senior and student tickets for performances at Victory Gardens Theater and the National Museum of Mexican Art are available at a $5 discount. Student tickets at Steppenwolf’s 1700 Theatre are available as $15 rush tickets; senior tickets at Steppenwolf’s 1700 Theatre are available at a $5 discount. Select Friday matinees will be $3 per Chicago Public High School student.

The Chicago Latino Theater Alliance was co-founded in 2016 by the three most prominent Latino cultural organizations: International Latino Cultural Center, the National Museum of Mexican Art, and the Puerto Rican Arts Alliance, joined by co-founder veteran arts executive, Myrna Salazar. Through its mission, CLATA aims to preserve and promote Latino cultural heritage by fostering the best works of Pan-Latino playwrights and by presenting culturally savvy productions that will not only engage Latino communities, but incite cross-cultural exchange amongst a diverse range of communities in Chicago.

The Chicago Latino Theater Alliance, wishes to thank its funders without whom its mission would not be possible to foster and showcase thought provoking works of Latino theater artists, to inspire a cross-cultural audience: The John D. and Catherine T. MacArthur Foundation, Allstate Insurance and the Department of Cultural Affairs and Special Events.