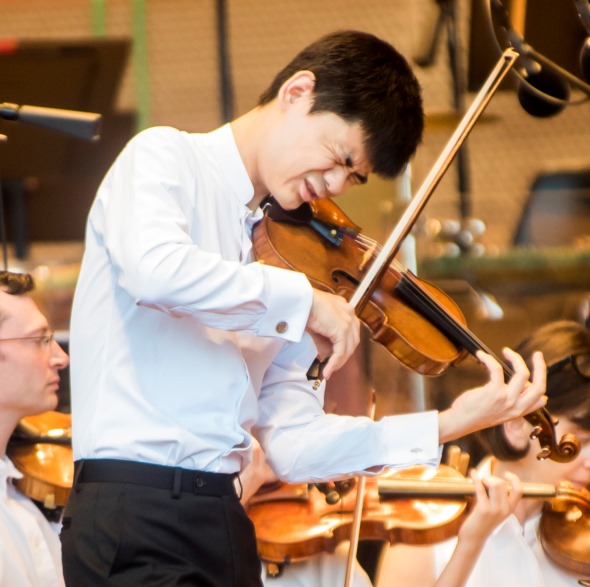 Americana and Romanticism, as well as a thoughtful view of America’s shadowed past, were on display at the Jay Pritzker Pavilion on July 19 when Brett Mitchell led the Grant Park Orchestra in works by Kenji Bunch and Copland as well as Saint-Saëns’ Violin Concerto No. 3 with soloist Angelo Xiang Yu, who had no trouble demonstrating why he won the Yehudi Menuhin International Competition in 2010. 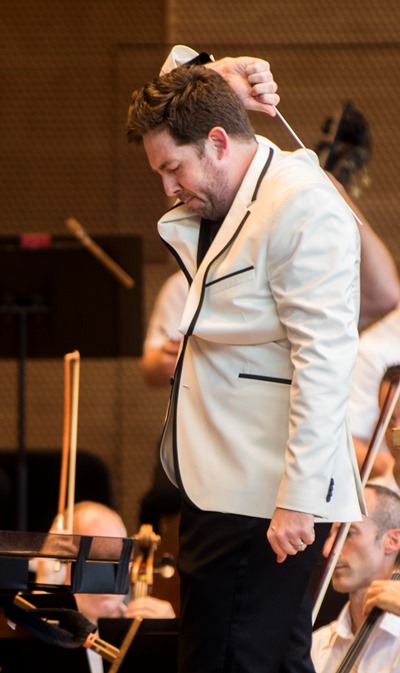 Mitchell, about to take his place as music director of the Colorado Symphony, started with a few opening remarks that gave the impression of comfort and confidence. That impression dwindled as Bunch’s 2011 “Supermaximum” began. Nor did the orchestra sound comfortable, a situation made worse by under-amplified strings that traffic noise sometimes drowned out.

According to notes from the composer, “Supermaximum” was “inspired by the rich tradition of chain gang songs” in the Jim Crow South. The percussion played an unpitched, repeating rhythm while the string players stomped their feet and slapped their fingerboards. It sounded like hammers, cracking rocks, even the heavy anguished breathing of prisoners, yet Bunch claims his work ultimately celebrates people who resorted “not to violence, but art” to deal with unimaginable injustice and pain.

Hope came in the form of pitches, just as chain gang prisoners kept their own hearts from breaking by singing as they worked. But once the folk-like lines in blues scale got rolling, the ensemble did not sound rhythmically focused or emotionally committed. The piece changes style so frequently that it’s hard to get a sense of its development, and Mitchell did not guide his players clearly toward a goal. The greatest glimmer of hope was in the last few bars, leading up to a bone-vibrating jazz chord.

The amplification issues changed but did not exactly improve for Saint-Saëns’ Violin Concerto No. 3 in B minor. The over-miked violinist was the 28-year-old Yu, who combined a silky-smooth bowing arm with a virtuosic left hand, making well-shaped phrases that mused and sighed through Saint-Saëns’ grand melodies. His buttery rubato never strayed into over-sentimentality. Mitchell led the orchestra solidly; both conductor and ensemble seemed much more comfortable in this repertoire. 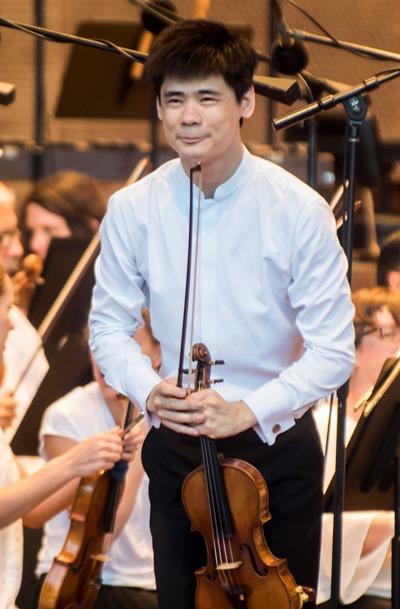 The second movement, Andantino quasi allegretto, began with an audience member’s baby crying out at heldentenor strength before Yu even had a chance to draw a sound from his instrument. But once he started playing, the little one was soothed to silence. This movement showed off sensitive interplay between the soloist and woodwinds, with Mitchell coaxing great tenderness from the orchestra. The strings swirled out a sweet, gentle sea for Yu to float upon.

With as much flash as the late Romantic concerto genre demands, Yu blazed his way through the finale, possessed of boundless energy. Mitchell and the orchestra picked up on that intensity and burned along with him. Yu kept a serene look on his face, seeming to find ecstasy in his own long bow strokes. Despite this serenity, in the cadential passages he managed some real grit – extraneous frictional sounds that provided important contrast to the general smoothness of his style.

The final work on the program was the suite Copland pulled from his 1947 score for the film “The Red Pony” (based on a Steinbeck novella). While audiences might not be familiar with this piece, it was still known territory: Copland used all his beloved tricks, and it was the perfect treat for a breezy summer evening in the middle of America.

Happily, the amplification balance improved for these six short movements. As Copland was the defining master of Americana in program music, you didn’t need to have seen the movie to conjure up clear images. We all awoke, yawning and stretching, as the opening movement, “Morning on the Ranch,” illustrated twittering birds, drops of dew, and the lengthening lines of the western landscape at sunrise. Mitchell succeeded in evoking a sense of wonder, in part thanks to the delicate lacing of harp chords and the woodwinds’ lonesome call. It was impossible not to think of rhythmic motifs and harmonic language from Copland’s ballet “Billy the Kid.”

The least predictably Copland-like movement is the third, called “Dream March and Circus Music.” The dream section is dissonant and halting, as if a puppet were dancing. Some passages are strictly tonal, but with the orchestra divided into two keys at once. Mitchell was not afraid to unleash some wild weirdness in the circus section, which features an unsettling calliope tune and an onslaught of piano chords with tambourine accents galumphing up and down to simulate creepy laughter.

“The Red Pony” Suite is not without angst – in “Grandfather’s Story,” movement five, the brass melody marching over strident string patterns tells a tale of peril – but this is Copland’s world, not to mention that of 1940s Hollywood, so you know everything will turn out fine. In fact, the last movement is called “Happy Ending,” bringing back the grand chords and angular melody from the opening. Mitchell and the Grant Park Orchestra made us believe, if only for half an hour, that Copland’s Technicolor soundscape was reality and the American Happy Ending was possible.