In soft music of bubbles and cactus needles, concert attunes the ear to whispered sounds 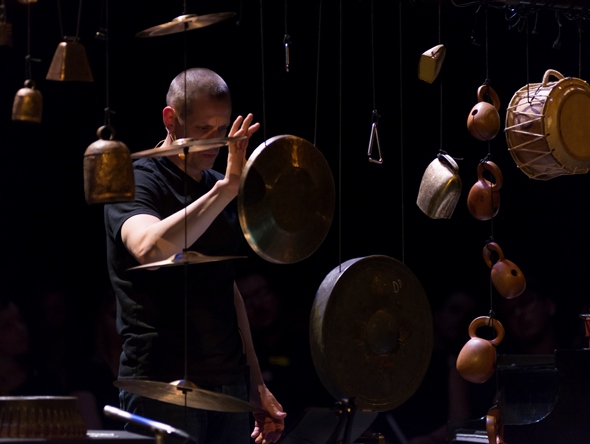 Review: “Whisper(s),” a concert presented by the Museum of Contemporary Art Chicago and Contempo at the museum.

In conventional classical-music concerts, it’s easy to get so swept up in elements like melody, harmony and rhythm that we overlook the essence of the individual sounds involved. In other words, we see the forest but not the trees.

In a concert April 23 at the Museum of Contemporary Art Chicago, the focus was very much on the trees. The event was a meditation on sound, an exercise in listening. Really listening. Titled “Whisper(s),” it featured such unexpected and magical “quiet sounds” as the gentle gurgling of water bubbles, the low growl of an air-raid siren and the almost imperceptible ping of a plucked cactus needle. 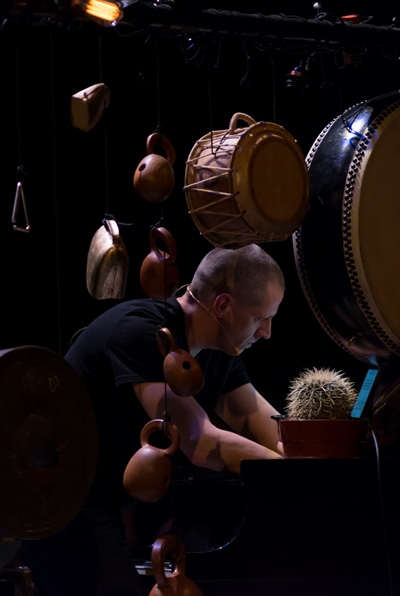 Matthew Duvall, co-artistic director and percussionist of the Chicago-based contemporary sextet Eighth Blackbird, served as curator, leader and principal performer for this revelatory concert presented in partnership with the University of Chicago’s musical collective Contempo.

The presentation took place in conjunction with the museum’s exhibition “Merce Cunningham: Common Time,” which examines the wide-ranging accomplishments of the pioneering modern-dance choreographer. But the more important connection here was Cunningham’s frequent collaborator, John Cage, an inveterate experimentalist and risk-taker, especially when it came to the creation and perception of sound.

Cage would have loved this concert, a theatrical happening complete with two stage directors and a lighting designer. The percussion instruments essentially served as set pieces, with the lighting changing as Duvall moved from one instrument to the next. A major dramatic flourish was the lowering of a bar with perhaps three dozen percussion instruments hanging from it – all manner of gongs, bells and drums – with a string of light-bulbs interspersed to enhance the showy effect. Duvall used this instrumental line-up for Morton Feldman’s “The King of Denmark” (1964), a free-form soundscape in which everything is performed without sticks or mallets. 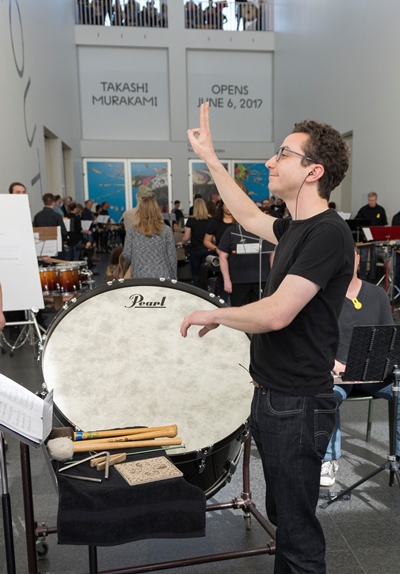 But the biggest theatrical event came at the end with the world premiere of Polish composer Marta Ptaszyńska’s “Voice of the Winds.” What was most compelling about the work was not so much the music itself (which certainly had plenty to offer) but how it was performed. There is much talk in the contemporary-music world about taking concerts out the halls, and that is literally what happened here.

At the conclusion of the first two parts of the program, a group of nearly 80 performers who had been seated at the rear of the stage got up and began processing out the theater, each playing a hand-held percussion instrument. The audience was directed to follow them, and with the musicians serving as guides, listeners walked up the stairs and gathered on one of the three main levels of the museum. This “aleatoric processional,” as Ptaszyńska calls it in her program notes, was the first movement the composition.

For the second and principal movement, the percussionists took their places at vibraphones, marimbas, drums, cymbals and a host of other instruments that had been placed in the main-floor lobby and atrium, as well as the mezzanine balconies and the third-floor lobby and balconies overlooking the central atrium. With Duvall and the six members of Third Coast Percussion and Beyond This Point serving as conductors, leading with big gestures and holding up fingers to signal sections in the score, this mass of musicians then proceeded to perform the rest of Ptaszyńska’s work. It all held together amazingly well. 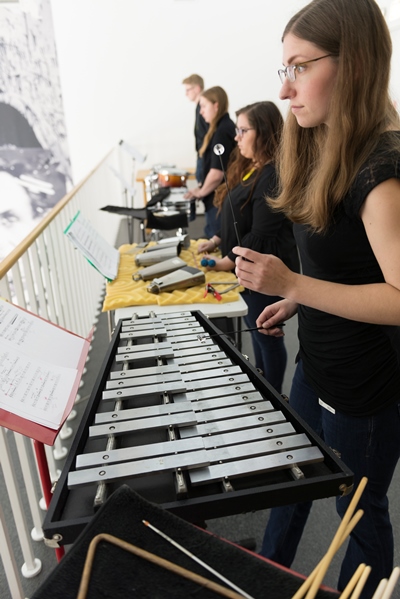 The effect was weird and wonderful at the same time. Some audience members were seated among the musicians, while others stood or walked from one floor to the next to take it all in. I stood on a third-floor balcony, flanked on one side by the musicians and listeners crowded there, and I could see across to the musicians on the other balcony as well as the musicians and listeners on the atrium floor. It was an amazing, ever-changing spectacle, but more compelling were the sonic effects, which suggested the sounds of a walk in a forest: a woodpecker tapping a tree trunk, wind blowing through leaves, an animal scurrying through underbrush. The noises came from near and far, and they blurred together into an organic whole.

Ptaszyńska sought to create what she calls a “sonorous musical sculpture,” with percussionists performing in the “most delicate and soft way.” While there were a few moments when the music built in rhythmic intensity, it was much more about soft washes of sounds – penetrating bell-like tones or low rumbles of drums – that swelled and ebbed. A highlight came around midway in the piece when the conductors made a triangular shape with their arms and all of the musicians began to play varying-sized triangles, with the sustained, ringing sounds of the instruments reverberating up, out and across the building’s interior to spellbinding other-worldly effect. 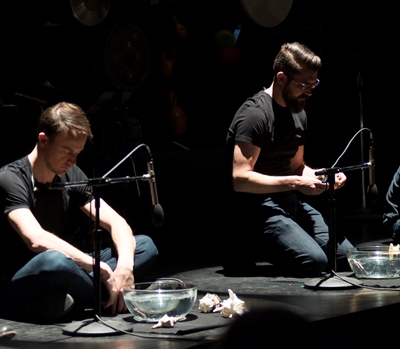 This extraordinary sound spectacle is likely the memory that most people will carry away from the concert, but there were also plenty of notable moments during the first parts of the program. Highlights included Matthew Burtner’s “Broken Drum” (2003) in which Duvall managed to generate a surprisingly nuanced array of sounds by hitting what appeared to be an old brake drum using sticks and mallets.

In Richard Reed Parry’s “Heart and Breath” (2014), Duvall joined Eighth Blackbird pianist Lisa Kaplan, who wore a stethoscope and played a steady cadence on the piano that was timed to her heartbeat – while Duvall drew a bow along the side of a vibraphone in sync with his amplified intakes and outtakes of breath. The second part of the concert ended with Cage’s “Inlets” (1977), in which Duvall and the four members of Third Coast Percussion used shells in bowls of water to produce the lulling sounds of gurgling, splashing and dripping amplified by close-in microphones.

Among the things that could be learned from such a musical adventure: compelling music is not just produced on violins, clarinets or even standard percussion instruments, and classical concerts don’t have to take place in concert halls. But perhaps the biggest lesson was simply to take a moment to stop and listen.