Daniil Trifonov’s prodigious recital March 26 at Orchestra Hall provided a ringing reminder of what a treasure the Symphony Center Presents annual piano series is. To have 10 such virtuosi parade across that stage over the course of a season is a gift not to be taken lightly.

Still, that said, Trifonov’s heady program was exceptional even for the world-class keyboard lineup that populates the SCP series. Including two encores, his afternoon’s work ran to nearly 2 hours and 40 minutes, a program of staggering physical, technical and intellectual demands that grew only more marvelous turn by turn. In sum, the experience suggested – once again, I might add – that the Russian-born Trifonov, who turned 26 years old earlier this month, may be the peerless star among today’s younger pianists.

The entire first half was devoted to Schumann, starting with “Kinderszenen,” a set of 13 fantasies evocative of childhood though quite beyond the means of children in their often deceptive pianistic requirements and expressive depth.

Thus Trifonov wended his way from the faint exoticism captured in “Of Foreign Lands and People,” the racing frolic of “Blind Man’s Bluff” and poignancy of “Pleading Child” to the luminosity of “Dreaming” (better known by its original German title, “Träumerei”), the Quixote-like bravura of “Knight of the Hobbyhorse”) and the final solemn deliberation of “The Poet Speaks.” Yet, in a sense, this suite of disarming loveliness and charm was the pianist’s warm-up.

Returning to the stage, Trifonov attacked – there’s no other word for it – Schumann’s youthful Toccata, a hell-for-leather proclamation of himself that perhaps has a modern equivalence in Prokofiev’s First Piano Concerto. The headlong “Toccata” – literally, touch piece – rockets ahead in breathless moto perpetuo, an extended and unremitting test of pianistic wherewithal that Trifonov tossed off with an air of athletic joy. This might have been the young Liszt, reveling in his majestic singularity. It also offered a vivid indication of the pianist Schumann must have been.

Then on to Schumann’s “Kreisleriana,” the pièce de résistance – of the first half! Think of this imposing proto-expressionist suite of eight psychological portraits as “Kinderszenen” revisited in a shadowy adulthood. Apart from the occasional “agitated” or “playful,” there’s little in the way of suggestive titles here beyond “very lively” or “very slow.” Yet the psychological portraiture is as bold as it is evocative, and Trifonov rummaged through the work’s split personality like a skilled analyst, probing the dark side and indulging the lyrical retreats – all with impeccable precision and finesse. 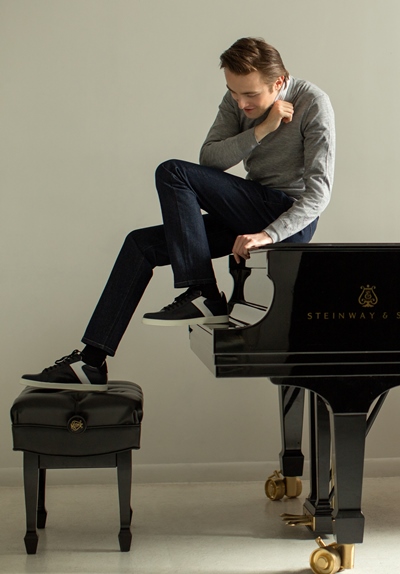 If the recital’s opening portion might have sent listeners home quite content, the second half only made one wish for more. Trifonov began with five cuttings from Shostakovich’s 24 Preludes and Fugues, a work from the composer’s absolute peak period – but a time (1950-51) when the perilous weight of Stalin’s disapproval lay heavy upon him.

In the relative safety of this classical form, Shostakovich ventured to submit himself to public display and official judgment. Trifonov chose five preludes and their complementary fugues – the dark E minor, then the pairings of A major/minor and D major/minor.

The pianist approached these soaring, introspective and hotly honest pieces with a clarity and directness that went straight to the heart of each one. In the end, this listener wanted nothing more than for the pianist to return and play the full panoply of 24 Preludes and Fugues in a single program. That would be an experience to relish indeed.

And yet there was more here, and I’m strongly inclined to say the best was indeed last: Stravinsky’s Three Movements from his ballet “Petrouchka.” Just a couple of weeks ago, the Chicago Symphony Orchestra gave a marvelous full-length performance of “Petrouchka” with conductor Esa-Pekka Salonen. This remarkable young pianist may have topped that single-handedly.

Beyond qualities like scintillating, burnished and disarmingly brilliant, Trifonov made a still greater impression in his thorough grasp of the complexities of this dark comedy – the wry wit, the wrenching twists, the dry vivacity. It was an emotionally involved performance, magical and thrilling.

At that point, Trifonov surely owed nothing more to his exuberantly admiring audience – but he played two encores nonetheless. First, a leisurely turn through Nicolai Medtner’s “Alla Reminiscenza” from “Forgotten Melodies,” then Prokofiev – a pungent, droll and biting account of the Gavotte from the ballet “Cinderella.” One last, savory morsel to finish off a pianistic feast.