‘The Nether’ at A Red Orchid: In virtual world, dark ventures into forbidden sex, gory murder 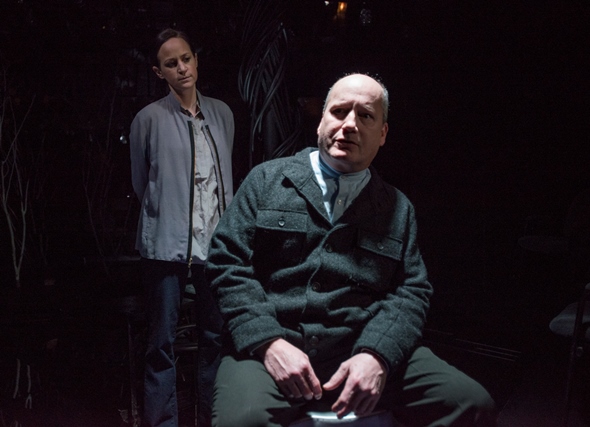 Review: “The Nether” by Jennifer Haley, at A Red Orchid Theatre through March 12. ***

In the unconscious, are sexual gratification and the urge to slaughter two sides of the same coin, expressions of the same feral impulse, the same profound (even infantile) need? It’s the question at the core of Jennifer Haley’s fascinating – and not a little disturbing – play “The Nether,” now doubtless holding audiences in rapt attention at A Red Orchid Theatre. 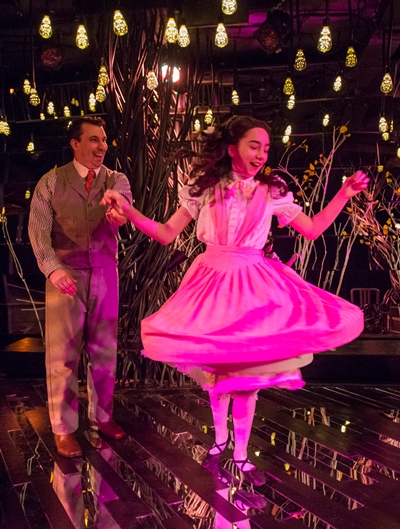 Remove all the normalizing (indeed, humanizing) constraints imposed from infancy and ensured by laws, toss out the very idea of a moral compass, and what form might our quest for physical interpersonal fulfillment take? “The Nether” offers a hypothetical snapshot.

As portraits of perversity go, this one is singularly elegant. There’s no on-stage carnage, no blood, though a repeated ax murder stands as a central motif; nor is there any sex, though the pedophillic allure of a little girl (played with disarming cool by child actress Maya Lou Hlava) is the basis of the play. Anything that might be visually shocking or offensive happens off-stage.

But plenty is implied in what essentially amounts to a super-high tech adult video game in a futuristic iteration of the Internet, by now renamed the Nether. Interactive streaming has been superseded by a technology closer to beaming: You can actually go to the virtual entertainment realm of your choice. What’s more, if real life loses its appeal, you can “cross over” to the Nether – but punch that ticket to the other side and there’s no coming back. 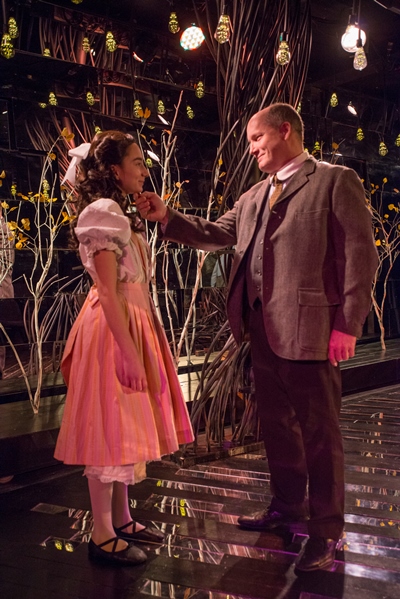 The investigator takes the further step of sending an uncover officer (Steve Schine) to the questionable site several times – to collect first-hand evidence, which means following through (at least to some degree) on the enticements of the charming adolescent, or perhaps pre-pubescent, Iris. Sweet Iris, all buttoned up in white flounce petticoats and a pink jumper, offers a special treat in the next room; returning guests also are expected to avail themselves of the medieval double-bladed battle ax. Iris is eagerly up for that, too.

Iris isn’t real. Like all the “clients” passing through, she is an avatar. Ah, but of whom. That key question remains off the table through most of the play. How Sims created this particular little girl is addressed, however: In a sense, she’s the reward he fashioned for himself – Iris calls him Papa – for exercising self-restraint many years ago in a situation where he could have caused great harm. 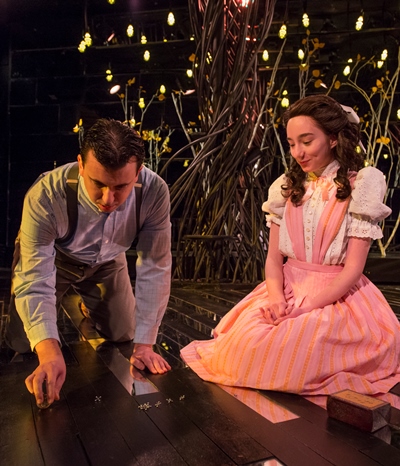 Knowing himself as he does, and understanding that the world is full of fellow sufferers of his particular stripe, Sims built this virtual alternative where appetites can be indulged with the confidence that no one is going to get hurt. It seems as real as it is wild and forbidden, especially the crimson-hued bit with the ax; but in an instant, there’s lovely Iris again, every button in place, ready for an encore.

Hlava’s Iris is a creepy gem, a beaming, bright-eyed, stone-cold tribute to the collaboration between the very young actress and director Karen Kessler. This Iris conveys blank, unnerving digital facsimiles of emotion and occasionally even veers toward the volatility of self-awareness.  For instance, she would like to have a birthday. That’s when Sims steps in to remind her that aging would be unacceptable – and that Irises before her who have aged, or broken certain rules, have been sent away “to boarding school.”

Why is Sims even saying these things to an image formed of ones and zeros? The further we move into “The Nether,” the more such questions arise until we realize nothing is quite what it appears to be, and that we’re in the middle of a sly mystery. It will resolve into a poignant human drama. Sims may appear to be the protagonist, but his client Doyle – a highly respected teacher tormented and grievously yearning in Doug Vicker’s touching performance – holds the key that can unlock everything.

As “The Nether” whirls toward its stunning conclusion, some raw truths push to the surface about the human condition – through that permeable, perhaps virtual, membrane that shields us from our untamed origins in the unconscious.