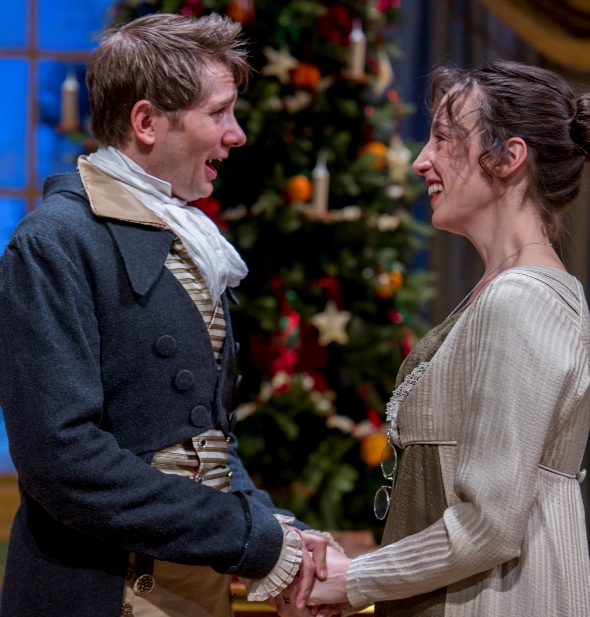 Less than halfway through “Miss Bennet: Christmas at Pemberley,” a happy world premiere in the spirit of Jane Austen’s “Pride and Prejudice,” I found myself wishing that Elizabeth Bennet had eight sisters, not four.

That way I could look forward to more Austen sequels by the playwright team of Lauren Gunderson and Margot Melcon. They have done a pitch-perfect job assimilating the 19th-century novelist’s way with words while spinning entirely new adventures for the bookish, presumably unmarriageable, middle sister of the Bennet household — Mary.

The light drawing-room comedy is set at Christmas time in the Fitzwilliam Darcy estate at Pemberley, where an awkward romance explodes hilariously into bloom for gawky Mary (Emily Berman, in a superb comedic turn). I hope Gunderson and Melcon are already thinking hard about what that other middle Bennet sister might be up to in London. 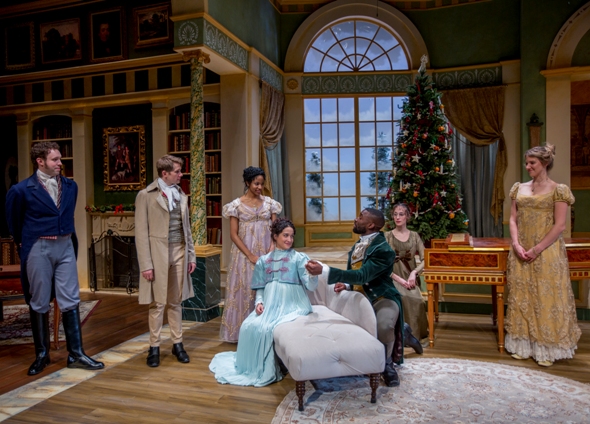 “Christmas at Pemberley,” directed by Jessica Thebus, begins a few years after “Pride and Prejudice” has concluded with the marriages of brilliant, opinionated Elizabeth (now Mrs. Fitzwilliam Darcy) and her radiant, sweet-tempered elder sister Jane (now Mrs. Charles Bingley). At the opening of this new play, Jane is fairly bursting with the imminent birth of her first child, and Elizabeth has gathered much of the family for the holidays at Pemberley, where she and Darcy live in easy luxury. (The tastefully appointed Regency-era drawing room is designed by Richard and Jacqueline Penrod.)

Elizabeth (witty, elegant Samantha Beach) is her usual spirited, independent-minded self, having just adopted the popular German custom of killing an evergreen, dragging it indoors, and preparing to decorate the thing for Christmas. Baffled husband, friends and servants scramble to catch up with this new whimsy, as evidenced in a parade of entrance lines and sight gags that establish the play’s irreverent tone. (Aila Peck as Jane Bingley, Tosin Morohunfola as Charles Bingley and Alex Goodrich as Darcy complete the quartet of affable, good-natured aristocrats whose banter lays down a carpet of elegance for bashful Mary’s awkward steps at romance.) 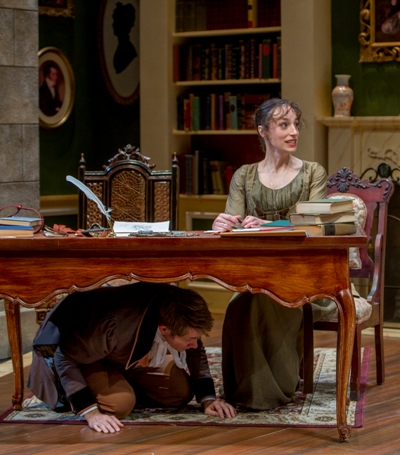 The twist that changes the course of Mary’s life is the death of the tyrannical dowager Lady Catherine de Bourgh, Darcy’s imperious aunt, who had attempted and failed to derail Elizabeth’s marriage to Darcy. The great lady had envisioned that her own plain and sickly daughter, Anne, was to be Darcy’s wife, but he was having none of it. Since then, Lady Catherine has convinced Anne that a different match is an absolute – make that Urgent! – must, to the wealthy distant cousin Arthur de Bourgh. It is Arthur to whom Lady Catherine’s property is now entailed by rules of English inheritance, and Anne (the ferociously funny Bri Sudia, who blows in like a tornado) has the diffident bachelor fixed in her sights.

Painfully self-effacing Arthur is terrified. In a tour de force of physical humor, Erik Hellman nails this part with dead seriousness and impeccable comic timing worthy of an Inspector Clouseau. Arthur is a man who has spent his young adult life hiding in the bookstalls at Oxford, studying snails. Yet when he and Mary literally stumble upon each other in the library at Pemberley, something deep within them stirs. It takes aggressive nudging by Darcy and Bingley on the one hand, and Mary’s sisters on the other, to persuade the reluctant sweethearts to resist pouring the chill of accuracy on what could be, should be, true love. 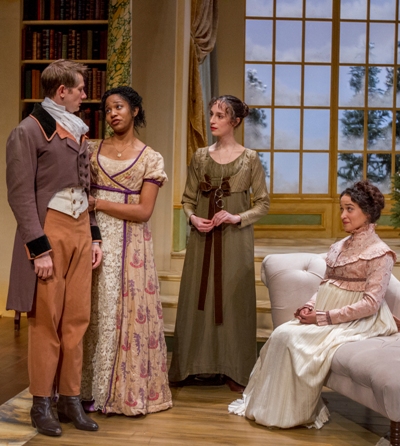 Several other twists occur in the course of this tale, among them the meddling of the Bennet’s youngest sister, the determinedly vivacious Lydia, played by Jennifer Latimore out to the tantalizing raw edge. In “Pride and Prejudice,” Lydia had been hastily married off to the reckless Mr. Wickham, under pressure, when his dalliance with her created a scandal that threatened the fortunes of all the Bennet sisters.

In this sequel, Lydia arrives at Pemberley spouting the fiction of her happy marriage and venting her frustrations dangerously sideways, with no small meanness of spirit, leaving some loose ends in the plot that the playwrights might have more neatly tied. Perhaps there is hope for Lydia yet, but the situation is not encouraging. Sequel, anyone?