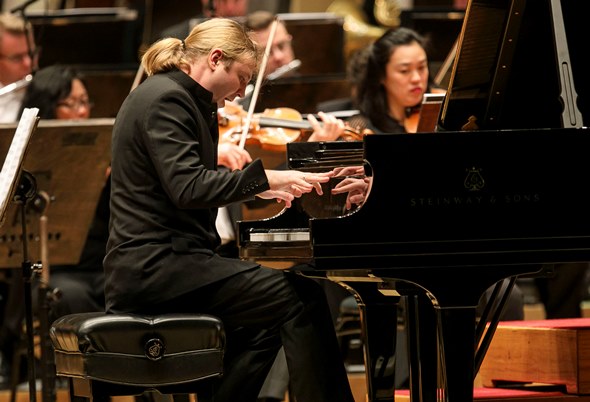 The technical demands Prokofiev placed on the soloist – that would have been Prokofiev himself – in his Second Piano Concerto are formidable, really quite astounding. But chops alone will not suffice. The fiery (mind that word, for we shall return to it) Second also demands the fierce temperament displayed by Russian pianist Denis Kozhukhin in his electrifying performance Nov. 18 with the Chicago Symphony Orchestra and conductor Emmanuel Krivine. 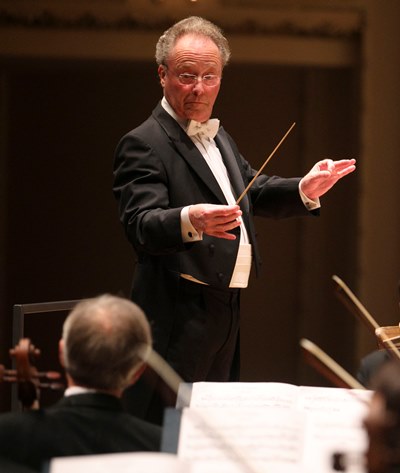 What Prokofiev presented to a Paris audience in 1924 as his “revised” Second Piano Concerto was a recasting from memory of a work written (and premiered) a decade earlier in Russia when he was 22. The original manuscript apparently was burned by new tenants in the composer’s Petrograd apartment to cook a meal – a real-life re-enactment of the starving artists’ scene in Puccini’s “La bohème.” Surely, the concerto’s reconstruction was likewise forged in flames: The Second Piano Concerto is, through and through, hellacious.

To hear the work played by so authoritative a pianist as the 30-year-old Kozhukhin is to understand why it doesn’t turn up all that often. It is half an hour of knuckle-breaking pianistic aggression relieved only occasionally by breaths of lyricism. Imagine the fierce rhythms and acerbic harmonies of Bartók superimposed on the dark, grandiose romanticism of Rachmaninoff and you’ll have some sense of Prokofiev’s remarkable concerto. 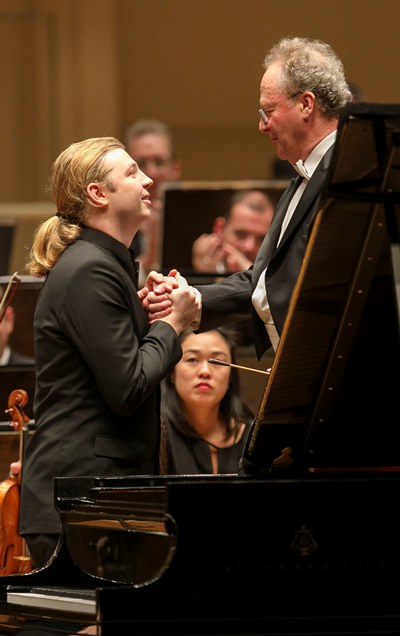 The work’s intensity, and Kozhukhin’s aptitude for it, came immediately to the fore in the opening movement when the soloist left the orchestra behind and plunged into a private storm. Oh, a cadenza, you say? Indeed, there never was such a cadenza. This prodigious rhapsody was more like a turbulent soliloquy, an unharnessed improvisation that split off tangentially from the concerto. Kozhukhin turned it into a show of pianistic virtuosity and intellectual force that transcended the gravitational pull of convention.

And so it went, this four-ring circus, the spotlight following Kozhukhin from movement to fearsome movement, from one diabolical tableau to the next. It’s only a slight exaggeration to say Prokofiev sketched in the orchestral part as mere backdrop, though his suggestive flourishes are wrought with characteristically vivid hues, which Krivine and the Chicago Symphony delivered with unwavering élan.

At the performance I heard, the audience roared its appreciation for Kozhukhin’s spectacular playing and would not be satisfied until he offered an encore – an elegant, feather-light turn through Scarlatti’s Sonata in C-sharp minor, K. 247. Time to learn this young pianist’s consonant-crowded name. With any luck, Kozhukhin will be back at Orchestra Hall soon, with the CSO and in the solo piano series.

Not be overlooked amid the fire and brimstone was Krivine’s late-career debut with the CSO. How could it be that so masterly a conductor, former music director of the Orchestre National de Lyon in France, at age 69 is only now standing in front of this orchestra? The French maestro steered the CSO through a refined, buoyant and expansive account of Dvořák’s Symphony No. 8 in G.

If one tends to speak of an impressive young conductor as confident, Krivine showed the important difference in a veteran: He was assured. His Dvořák, indeed every aspect of his podium manner and his interaction with the orchestra, reflected art cultivated through experience. A thoroughly knowledgeable, sensitive and efficient conductor with nothing to prove, he offered leadership with grace and implicit faith that the great orchestra in front of him would respond to subtle gestures.

And so it did. Krivine’s Dvořák Eighth was singing, fluent, infectious. The CSO strings shone in conveying the work’s tuneful, gemütlich charm, and the brasses delivered Dvořák’s energizing fanfares with stentorian brilliance.

Krivine opened his program with Liszt’s symphonic poem “Les préludes,” a favorite of CSO music director Riccardo Muti and one that keeps popping up on CSO programs seemiingly to the exclusion of all other Liszt works in this form he essentially spawned. Still, Krivine elicited a suitably colorful performance that brought to mind how much this music resembles the orchestral settings of Liszt’s two piano concertos. Which, in retrospect, also inspires the thought that Denis Kozhukhin would be just the pianist to come back and play one of Liszt’s lately under-performed concertos. Or even both on one program. I’ve no doubt Kozhukhin could pull that off without breaking a sweat.