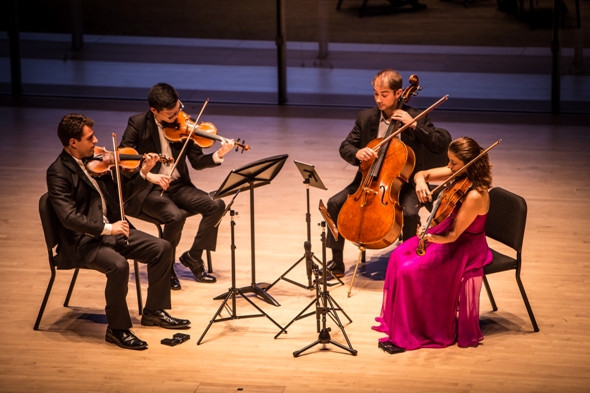 When the members of the Dover Quartet were students at the Curtis Institute of Music in Philadelphia, they were mentored by former members of the now-disbanded Guarneri, Vermeer and Cleveland quartets. It is not surprising, then, that the eight-year-old foursome hopes to follow in the footsteps of those distinguished groups, and if its superb concert Oct. 18 at Northwestern University’s Pick-Staiger Concert Hall was any indication, the ensemble is well on its way to accomplishing that goal. 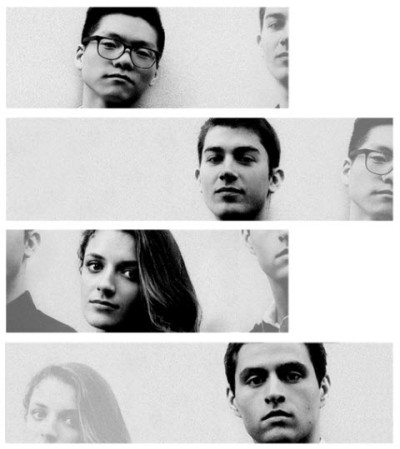 The Dover first grabbed the chamber-music world’s attention by capturing the grand prize and three special prizes at the 2013 Banff International String Quartet Competition, and it has been rapidly gaining momentum since. One of many indications of this young ensemble’s rising stature was its 2015 appointment to a three-year residency at Northwestern’s Bienen School of Music, a position that includes three concerts a season.

For its first offering of 2016-17, the Dover presented what might be called a program of “lasts” – Mozart’s final two quartets and Beethoven’s late Quartet in B-flat, Op. 130. The impetus for this line-up was the quartet’s just-released debut recording on the Chicago-based Cedille label, an all-Mozart album that includes the two quartets heard here. The release is a tribute to the vaunted Guarneri Quartet, which featured the same two works on its debut album 50 years earlier, and it also includes that group’s longtime violist Michael Tree as guest performer in Mozart’s String Quintet in C minor.

This is the kind of bedrock repertoire that tests the interpretative mettle of any quartet, and the Dover excelled at every turn. Displaying a maturity that belies the age of its members, the group plays with uncommon intelligence and finesse and a pleasing, well-blended sound. Perhaps most impressive is how comfortable they seem with each other and with this music.

That was especially evident in the two Mozart works that opened the evening – two of the composer’s so-called “Prussian” quartets – No. 22 in B-flat major, K. 589, and No. 23 in F major, K. 590. The Dover infused both with the kind of buoyancy, graciousness and elegance that so aptly suits the composer’s music. 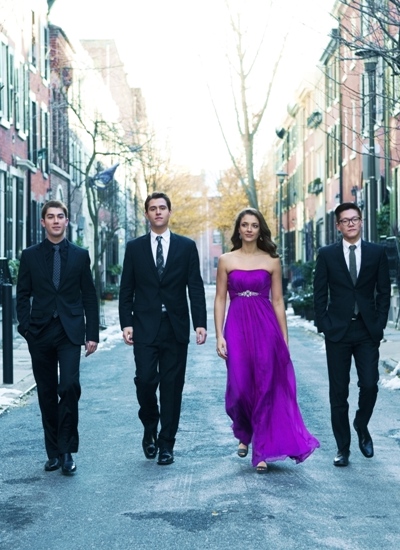 The group was at its best in the F major Quartet, bringing a relaxed air of lightness and vivacity to the opening movement, one of the high points of the evening. The Dover’s fine sound was richly in evidence during its gentle, affecting take on the slow second movement, in which it found a tempo that was suitably reflective without losing any sense of flow. After the perky Menuetto, the fourth movement burst with verve and sparkle. All in all, an impressive take.

The two Mozart quartets offered plenty of opportunities to hear each of the four players up close, and it quickly became clear that they are individually strong. First violinist Joel Link brings a bright, full sound and the kind of confident, extroverted demeanor to his playing that his position demands. He is well balanced by second violinist Bryan Lee, who more than holds his own.

Milena Pajaro-van de Stadt is a forceful voice on the viola with a handsome, dark-hued sound. But the linchpin of this ensemble is arguably cellist Camden Shaw. Constantly listening to and looking at all three of his colleagues, he plays with clarity and ease and a lighter, more refined sound that seems to suit this group. It is not surprising that he is the spokesman for the quartet. Shaw gave a short commentary on the evening’s works from the stage, and he wrote the insightful, down-to-earth liner notes for its new recording. 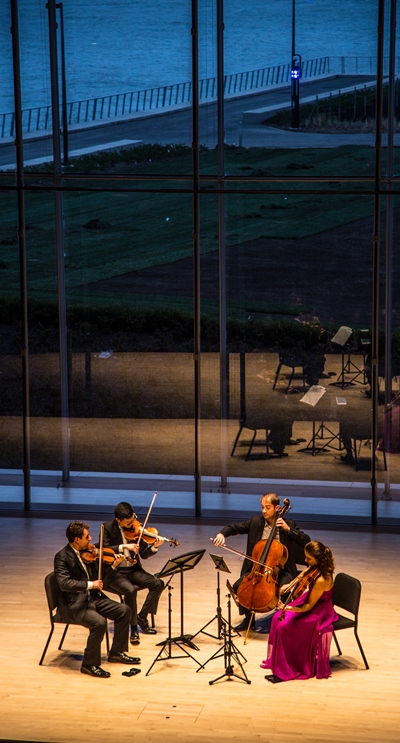 The Dover finished with the original version of Beethoven’s unconventionally structured, six-movement String Quartet No. 13 in B-flat major, Op. 130, which concludes with the notorious “Grosse Fuge (Great Fugue).” Musicologist Joseph Kerman once called Beethoven’s crowning fugue the “most problematic work” in his output and perhaps in all of classical music. Indeed, Beethoven’s publisher convinced him to write a new finale for the quartet and to catalog the “Grosse Fuge” separately as Op. 133.

To hear the original version intact was a thrilling if consuming experience. Befitting Beethoven, the Dover brought a bit more punch to its playing here, boring into the slow opening movement and deftly revealing the varied character of each of the movements that followed.

This work is best known for the melancholic Cavatina, some of most deeply touching music Beethoven wrote, and here, after a well-timed deliberative pause, the Dover was at is very best. Showing its fine tonal blend and interpretative depth to advantage, the ensemble did full justice to this masterful section, conveying its devastating emotional impact with beautiful, sustained lines and artful phrasing. It was the kind of “wow” moment that sets this young group apart and shows its abundant potential.

But the ensemble was hardly done. It turned its final attention to the “Great Fugue,” which Igor Stravinsky famously described as “an absolutely contemporary piece of music that will be contemporary forever.” While it has some slower, quieter moments, this piece is best known for its brute force and frenzied drive, all contained in a precisely engineered musical architecture. The Dover offered an intense performance with all the exactitude, power and propulsion this work demands, and if there were any lingering doubts about the group’s technical prowess, they were completely erased here.