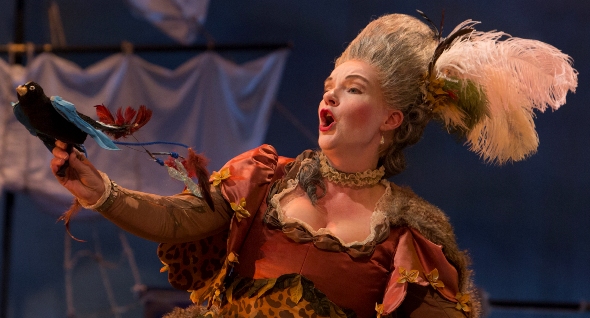 A sense of joyous buoyancy is the hallmark of productions at the Haymarket Opera Company, now embarking on its sixth season, and that spirit draws an increasingly enraptured audience. Lovingly honed historical details – use of period instruments, keen attention to stage gestures and movements – go hand in hand with imaginative concepts for richly colorful sets and costumes inspired by, but not tied to, historical sources.

All of which applies to Haymarket’s production of Haydn’s opera “L’isola disabitata” (The Desert Island), with a libretto by Metastasio, first performed in 1779 at the court theater of the Hungarian Prince Esterhazy. Thus Haymarket departs from its customary Baroque repertoire and breaks into the early Classical period, requiring a slightly larger orchestra including Classical flute, oboes, bassoon, natural horn, and fortepiano, together with strings.

From the distinctive overture forward, Haydn shows himself a master of orchestral colors and textures. The skillful writing and subtle handling of instruments and voices were well conveyed by artistic director Craig Trompeter and the Haymarket players. It was particularly admirable how the orchestra maintained a light touch in their many accompanied recitatives, which constitute a large portion of the score, in contrast to the sparser – or secco – recitatives for continuo instruments that were more customary for many operas of this period, including Mozart’s. Haydn’s use of full orchestral writing throughout, instead of the alternation between continuo and orchestra, makes for a more “modern” overall effect, but a less attentive conductor could have added too much weight to the instrumental parts, to the detriment of the voices.

“L’isola disabitata” was an opera meant for private consumption at a relatively small court theater. There are only four characters – Costanza and her younger sister, Silvia, and Gernando and his loyal companion Enrico. Metastasio wrote the libretto in the mid-1700s, about thirty years before Haydn’s musical setting, and the plot is simple, if marvelously far-fetched, as was often the case at this time: 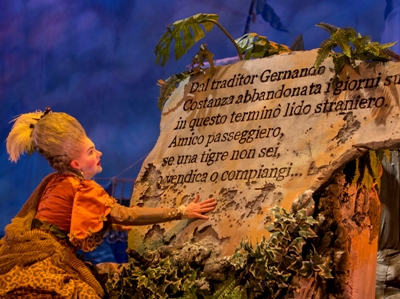 Newly-weds Gernando and Costanza are sailing towards the West Indies when a storm forces the ship to find shelter on a deserted island. While Costanza and Silvia rest in a grotto, local pirates abduct Gernando and Enrico. Thirteen years pass, during which the two sisters make a life for themselves on the island, which is blissfully rich in water and exotic fruit. Costanza believes herself abandoned by Gernando (“Se non piange un’infelice”) and carves an epitaph to her lost love, while instilling in Silvia a mistrust of all men, should she ever meet one. When Gernando and Enrico, finally freed, return, Gernando discovers the stone with the epitaph and is convinced that his wife has died. In a delicious parallel plot, Silvia encounters Enrico and marvels at her attraction to a member of the opposite sex (“Fra un dolce delirio”). The opera moves toward an eventual happy end, with a quartet for the two couples that is the only ensemble piece in the score (“Oh giorno fortunato!”).

The four soloists, some returning to Haymarket after previous roles, were well cast and assured in their delivery and interpretation. Soprano Kimberly McCord, an impassioned Costanza, sang with burnished tones in the low register, full-bodied top notes, elegantly shaped lines and impeccable diction. Suzanne Lommler, a mezzo-soprano with supple agility and a silvery ring in her sound, captured Silvia’s innocent disposition and emotional struggle. As Gernando, tenor Scott J. Brunscheen was poised and lyrical, if somewhat uncertain in his Italian pronunciation. The baritone Jonathan Beyer was sympathetic as Enrico, with both warmth and lightness in his voice and an ample dynamic range.

From the profusion of greenery and hanging fruits to the rocks and grottos, and the continuously moving waves that carried the approaching vessel, Zuleyka V. Benitez’s stage design, effectively lit by Lindsey Lyddan, enlivened the action with warm colors and playful stage machinery. The costumes by Meriem Bahri were as freely inventive as they were suggestive of historical accuracy, although oriented more towards the late Baroque than the early Classical, like the stage design itself. Movements and gestures were beautifully coordinated by stage director Sarah Edgar, contributing to a performance that was both musically satisfying and a joy to watch overall.

Haymarket will collaborate with Chicago Opera Theater in Purcell’s “The Fairy Queen” Nov. 5, 11 and 13 at the Studebaker Theater. In January, the players will participate in the Valletta International Baroque Festival in Malta. Back in Chicago, the company will offer a Lenten season oratorio – Scarlatti’s “Agar et Ismaele esiliati,” a retelling of the biblical Hagar and Ishmael story. Check here for details. 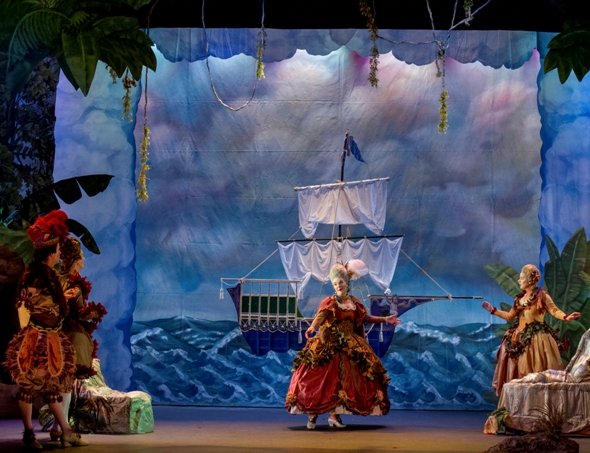