‘True West’ at Shattered Globe: Rival brothers, far apart in one place, at each other’s throats 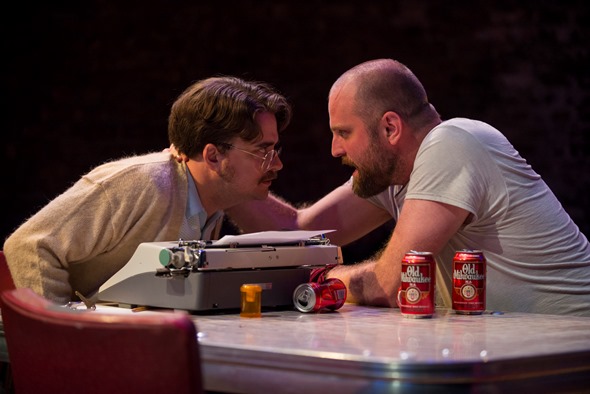 Austin and Lee are Jungian poster boys, brothers who seem to hold nothing in common, the one a buttoned-up intellectual writer and the other a beer-gulping ruffian and petty thief. But deep down, each pines for the life the other leads. They are the conjoined, complex antiheroes of Sam Shepard’s iconic 1980 play “True West,” and they are madly, marvelously superimposed in a startling production by Shattered Globe Theatre. 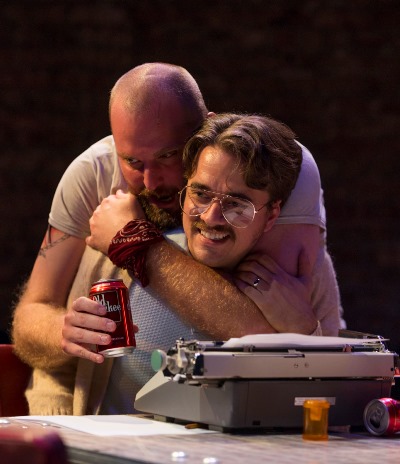 “True West” resembles the Stephen Sondheim musical “Into the Woods” in that witnessing the first act gives you no clue of the radical shift coming in the second – in characters you thought you knew.

While his mother is away, Austin (Kevin Viol) is using her home – 40 miles outside Los Angeles on the edge of the desert – as a retreat to work on a screenplay. The work is going well when, wraith-like, the hulking, ominous figure of Lee (Joseph Wiens) materializes in the darkened kitchen. Instantly, the old antagonisms resurface. Lee, a man of words few and hard, taunts his younger brother for his highbrow education and the easy path he has chosen; Austin in turn chides his older sibling for squandering his life on the fringe of human society.

The match hardly seems even. Were these not brothers, a bad outcome for Austin might seem likely. Wiens cuts a formidable Lee, a wild creature of the desert that might have sprung through an open window. You can’t take your eyes off this brilliant beast. Circling, snarling, swooping in on his prey, he is surely dangerous.  And all the while that Lee seethes and rants and threatens, he sucks beer – can after can after can. Or soaks himself indifferently in its spraying foam. 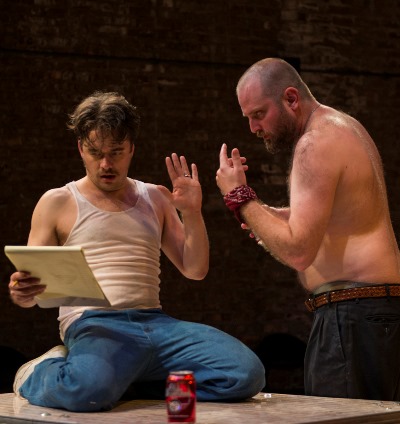 Austin may appear to be under attack and off-balance, ever parrying his brother’s thrusts. But in truth he knows this game well, knows its ebb and flow, knows Lee’s raw flourishes and pouncing gambits. In their first encounter, Viol hones Austin’s muted pitch precisely: He can stand up to his rough-cut, larger-than-life brother, but he’d really prefer to be left alone, in quiet, to finish his movie script.

Into this stand-off walks the Hollywood producer (Rob Frankel) of the film Austin is writing. Lee sees an opening. He has a story idea himself, an authentic story about real people, a true story of the modern West. No doubt the producer would envision a film in this concept if Lee could just get the chance to sell it. And lo, opportunity knocks.

The second act of “True West” is essentially an extended farce, and director James Yost, who adroitly manages the delicate balances of the early scenes, now pulls the rip cord. There is no fur to fly, but there are plenty of beer cans to dump on the stage, a load of angst for Austin to unload, a ton of delusion for Lee to embrace. As suddenly as this desert rat is transformed into the producer’s new top cat, the displaced Austin goes into meltdown. Wiens and Viol take the ensuing fraternal donnybrook – and near fratricide – to the outer limits of dark comedy. 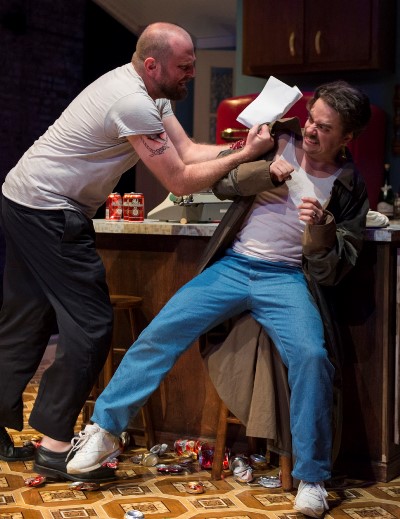 Austin, who in despair has abandoned his typewriter for a whiskey bottle, now insists he can play the rogue, the burglar, as well as his brother. But Lee needs Austin to write down his really great story, which the bedazzled producer has indeed promoted to front-burner project. Lee would write it himself, but he can’t type. Or spell. Designer Greg Pinsoneault’s homey – and durable – set gets some hard use as Wiens’ unlettered author wrangles with Viol’s newly besotted, impulsively retired screenwriter over the fate of Lee’s narrative.

One last wrinkle, a not entirely happy surprise, propels the whole loony business from the farcical to the surreal. When the dust has settled, the audience must surely feel no less dazed than the principals of this raging romp.

Kudos to lighting maestro Brian Patrick Healy for helping to make Wiens a seriously scary presence – and to props designer Clara Wendland, who apparently has located a bottomless source of beer cans.