With a sharp-edged slice through ‘Company,’ Writers reaffirms the promise of its new home 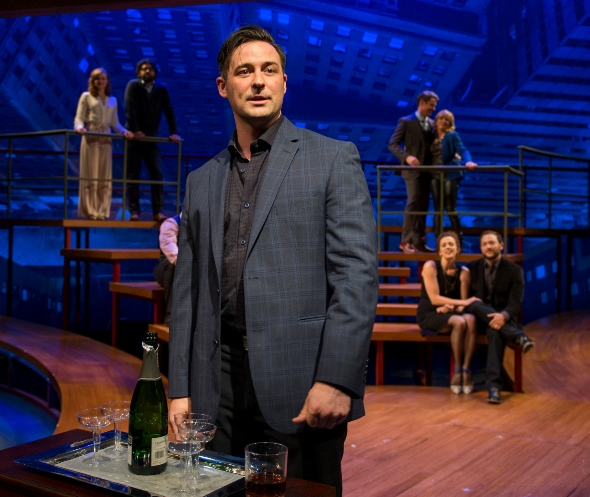 Review: “Company” by Stephen Sondheim, at Writers Theatre through Aug. 7. ★★★★

It has been only a half-season inauguration, this first series of plays in Writers Theatre’s splendid new building, but the finale, a sly and penetrating account of Stephen Sondheim’s musical “Company,” exemplifies how the main stage offers visitors an intimate, indeed an ideal, theatrical experience.

“Company,” a popular hit for Writers that was extended for additional sell-out audiences but now absolutely, positively must close Aug. 7, works so well in part because of a flexible performance space that director William Brown puts to optimal creative use.

Sondheim’s witty, multifaceted commentary on marriage – as contemplated by protagonist Robert (“Bobby”), who has just turned 35 – is a classic ensemble show with a cast of 14. Here, that sizable troupe moves with a clock’s well-oiled ease and timeliness. The adaptability of Writers’ stage affords a director wonderful options with multiple levels and entrance points.

“Company” echoed the success of the new facility’s dedicatory play, Tom Stoppard’s “Arcadia,” directed by Michael Halberstam, Writers’ founding artistic director and a driving force behind the creation of this elegant $34 million resource in Glencoe. “Arcadia” instantly demonstrated the essential usefulness – and warmth – of this house meticulously wrought for the enjoyment of theater.

The seating layout spreads viewers through a 180-degree arc. In these first two shows, I observed the stage action from four different perspectives. After reviewing “Arcadia,” I went back to see it a second time, sitting in different parts of the house for the first and second acts; I had yet another vantage point for “Company.” My impression is that you could draw a ticket from a hat and be assured of a rewarding encounter. The steeply raked seating creates a marvelous sense of intimacy. 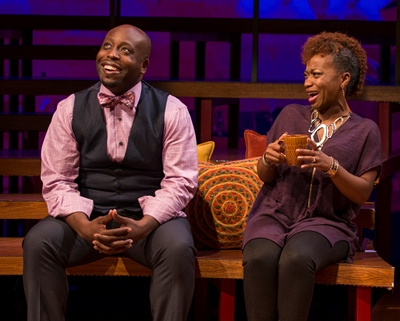 “Company” brought to mind Writers’ fine 2012 production of Sondheim’s “A Little Night Music,” another show that depends on many working parts all meshing together. But an argument can be made that whereas “A Little Night Music” has several starring roles, “Company” sets up a central, magnetizing figure (Thom Miller in a suave turn as Bobby) as catalyst, but fundamentally depends on tight ensemble work – for five married couples and a trio of Bobby’s girlfriends – to bring off Sondheim’s smart lyrics and vibrant tunes.

The context of “Company” is not just the vicissitudes of wedded life but also its infinite varieties and gradients, the truths – not exactly secrets, but truths — held within the four protective walls that shield every marriage. Bobby’s friends, the five couples whose good company has always been sufficient for him, allow their marital veracity to leak into view.

Harry and Sarah (the charming twosome of James Earl Jones II and Alexis J. Rogers) joust with each other over their respective sins of excessive drinking and eating, even to the point of a mock (or not-so-mock) karate conflict. Then there’s Peter and Susan (deliciously understated performances by Gabriel Ruiz and Tiffany Scott), a perfect couple who maybe make the case for marriage. Or maybe not. 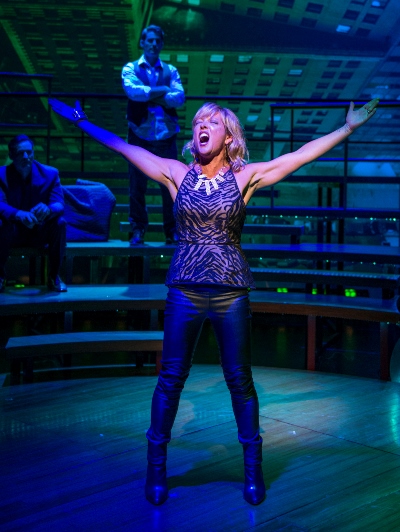 Sondheim’s marital landscape is inflected by some sharp-edged step-out numbers. Such show-stoppers at Writers twice bring things to a hair-raising halt. Allison Hendrix – as Amy, whose happy live-in relationship is about to become formalized by marriage – does a screamer of a turn through the lyric irony of “Getting Married Today,” a tempestuous rant in which Amy makes very clear that marriage is not on her planner: not now, not ever.

That acerbic rejection of conjugal bliss takes second only to “The Ladies Who Lunch,” a vitriolic send-up of society ladies and their empty enterprises – anyway as viewed through the dark lens of Joanne, a middle-aging woman well into her cups of bitterness. Lia Mortensen makes her way into the song like a building storm, gusts of bemusement rising to a cataclysm of distain for these fools who busy themselves against the inevitability of death.  (Hollis Resnik will finish off the run in August performances as Joanne.)

Out of the gate, in one intricate play and one sophisticated musical, Writers has quickly demonstrated what it can and will do with the means of its new dwelling. The first full season opens Sept. 7 with Shakespeare’s “Julius Caesar,” directed and adapted by Halberstam and Scott Parkinson. For the theater faithful of Chicagoland, the future at Writers holds tantalizing promise.