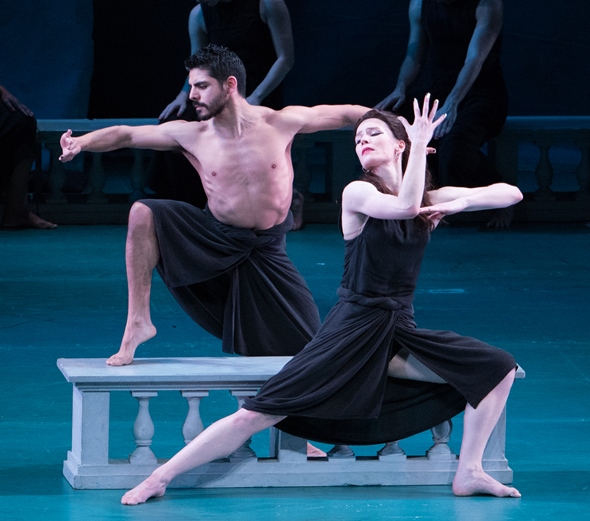 Review: “Dido and Aeneas” by Henry Purcell, choreographed and conducted by Mark Morris, at the Harris Theater.

Mark Morris ranks among this country’s greatest living choreographers. And one of the works that helped him achieve that standing is “Dido and Aeneas,” an unusual adaptation of English composer Henry Purcell’s celebrated 17th-century opera.

Premiered in Brussels in 1989 and regularly performed by the Mark Morris Dance Group since, it has earned the status of a time-tested masterwork, with its spellbinding visual tableaux, nuanced emotional power and hushed intensity. All these elements were amply in evidence April 5 at the Harris Theater as the company presented the first of two performances of the work almost 20 years to the day after its Chicago premiere at what was then known as the Shubert Theatre. 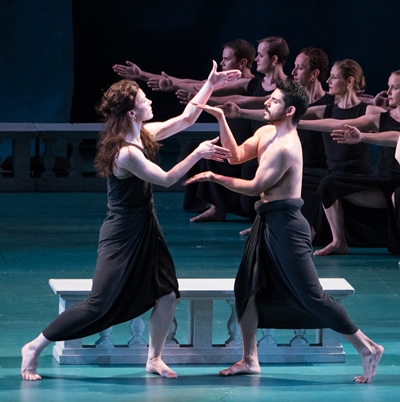 Morris describes this one-hour creation as a “danced opera,” a form that he essentially invented. While 14 musicians and 20 singers, packed into the Harris’ compact pit, performed the score, a dozen of the company’s dancers enacted the story on stage, taking on multiple roles.

This is not so much a dance work set to this milestone opera, but a complete and in some ways radical rethinking of it – a total fusion of movement and music that at once looks backward but also feels strikingly contemporary at the same time.

Drawn from Virgil’s “Aeneid,” this timeless story of love, sorcery and betrayal centers on Aeneas, a Trojan prince who is blown off course while on his way to fulfill his destiny as the founder of Rome, and Dido, the queen of Carthage.

Purcell’s stylized, declamatory writing is somewhat elusive and aloof in the best possible sense, leaving ample room for Morris’ dance interpretation – something that would be less possible, as the choreographer has noted, with Puccini or Wagner’s more explicit, romantic operas. 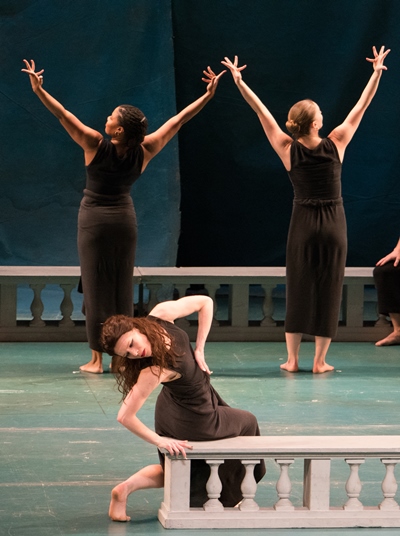 Morris deftly matches the opera’s formal, structured style with his hybrid brand of formalized, ritualistic movement that draws on a surprising range of sources, including South and Southeastern Asian dance and even American sign language. At the same time, it is impossible to look at this choreography without thinking of the stylized figurative depictions on Greek pottery.

Much of the movement has a strict geometric, often angled look, as in a stance in which the dancer’s front arm is bent upward, palm forward, with the back arm bent downward, palm backward and the back leg is bent slightly to the rear. Reflecting the Asian influence, gestures are all important, some suggestive of the words but others more abstract, such as the repeated fist on top of fist at the front of the body.

Morris frequently sculpts visual tableaux, freezing certain dancers in place and setting them against action happening elsewhere on stage. A particularly effective example comes in Act 1 when he poses Dido and Aeneas at the front the stage, with one of her hands touching his and her other hand touching his leg and vice versa, as the corps dances behind them.

The straightforward and affecting angularity of this moment is indicative of the simplicity that runs through this work. Although the choreography throughout is certainly complex in its way, Morris follows the dictum that less is more and does not over-complicate things. There are no lifts, no floor work, and he makes the most, for example, of basic movements like dancers moving across the stage with their extended arms slightly angled at their sides. 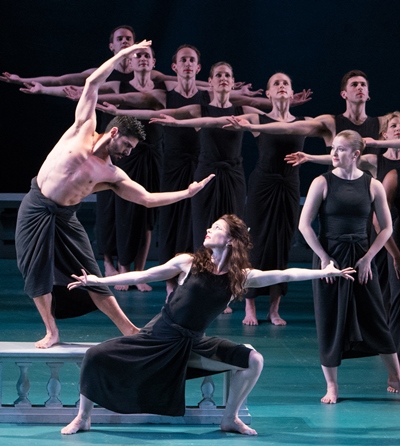 Offering a delightful contrast to the pervading formalism are the scenes with the Sorceress, who conjures a plot to break up the central couple’s love and dispatch Aeneas on his way to Italy, and her attendant witches. Their movement is more fluid and serpentine and at times they flit, flutter and convulse. Early in Act 2, the Sorceress appears in a sinister, spidery pose.

In the early years of this work, Morris performed both the role of Dido and the Sorceress, infusing interesting questions of gender identity into this production – a notion furthered by the generic black sarongs worn by nearly all the dancers male or female. He later cast the two roles separately, but in this production, both were performed by Laurel Lynch, suggesting that the two characters can be seen as the good and bad within the same person.

Lynch is a tall, striking dancer who compellingly delineated the two characters, bringing the right dose of restraint to Dido and then cutting loose with a delightfully frenzied, unfettered portrayal of the Sorceress. Well matched opposite her was Domingo Estrada Jr., who especially shone in his interaction with the Sorceress disguised as Mercury.

Continuing the simplicity of much of the choreography were Robert Bordo’s fittingly rudimentary sets, which consist of a two-foot-tall classical balustrade that runs across the back of the stage as well as another, four feet or so in length, closer to the front. The latter comes into play at the end, as Dido’s dead body is folded limply across it. The painted backdrop offers a rough map of part of the Mediterranean Sea with a slit in the middle through which Aeneas makes his departure – a neat little theatrical effect. 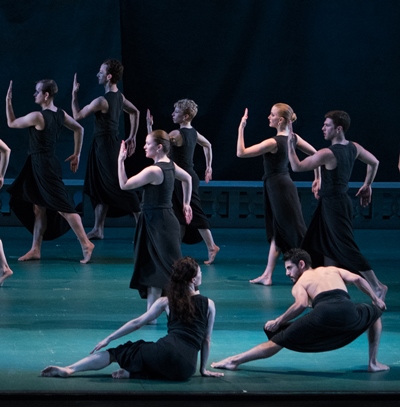 Nearly all choreographers connect with music in some way, but few if any are as consumed with it as Morris. From his earliest works, he has been distinguished by his instinctive, insightful pairings of music and movement. He has long decried the use of recordings, because he believes that a vibrant, organic interaction between the two can only be achieved with live musicians.

To that end, he founded the MMDG Music Ensemble in 1996, a first-rate group that performs alongside the dancers. It provides the choreographer not only the luxury of live music wherever the company goes but also musicians and singers who are intimately familiar with his works and their musical requirements.

This instrumental ensemble, which included theorbo and harpsichord, and chorus could hardly have been more in sync or more responsive to each other. (Particularly memorable were the whispered, almost imperceptible echoes in the chorus in Act 2.) Together, they performed with a fervor and commitment that no doubt energized the dancers on stage and enhanced the overall production. 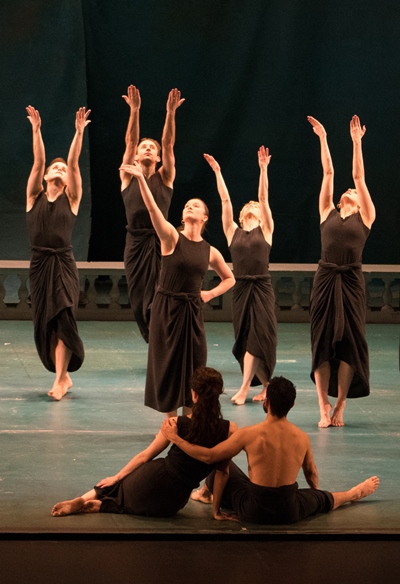 The four main soloists were all strong, starting with mezzo-soprano Jamie Van Eyck who only got better as the evening wore on, culminating with her aptly anguished, dark-hued version of Dido’s famed lament. After first hearing her fine portrayal of Dido, it was startling to encounter her very different, wild-edged and quite thrilling depiction of the Sorceress.

Soprano Sherezade Panthaki brought an appealingly full, natural voice and good feel for baroque ornamentation to the role of Belinda. Both she and soprano Marguerite Krull, who more than held her own as the Second Woman, also surprisingly transformed themselves in second solo roles as witches. Baritone Douglas Williams possesses a deep, resonant baritone voice, and he fully and affectingly filled out the role of Aeneas.

It might seem like a conceit that Morris would serve as conductor, but he showed himself to be highly adept in the pit, mouthing every word of the opera as he capably shaped the musical performances and made sure the pacing never flagged.

The biggest strike against this performance was the inability of the audience to follow the text. Even though the opera was sung in English, it was impossible not to miss many of the words and thus lose critical meaning and details. The text was printed in the program, but it was too dark to read, and bringing up the house lights would have harmed the delicate lighting design by James Ingalls. Opera companies generally offer projected surtitles even for works in English, and the Harris Theater should have done the same.

That shortcoming aside, Morris’ “Dido and Aeneas” remains a powerful and profound experience nearly 30 years after its creation – a work that draws its inspiration from a classic ancient tale yet speaks eloquently to our time.