Tenor Javier Camarena gives a debut of note, make that a generous bouquet of high C’s

Tenor Javier Camarena made his operatic debut in 2004 at the Palacio de Bellas Artes in his native Mexico, popping off Tonio’s nine high C’s in Donizetti’s “La fille du régiment.” Ten years later, on the stage of the Metropolitan Opera in Rossini’s “Cenerentola,” he became the third Met singer since 1942 to be granted an encore. He repeated the encore at the following performance, and as if this were not impressive enough, he did it again in mid-March, with a bis of Ernesto’s aria in “Don Pasquale.” Needless to say, Camarena’s Chicago debut at the Harris Theater on March 30 was hotly anticipated. His performance easily demonstrated what all the shouting is about. 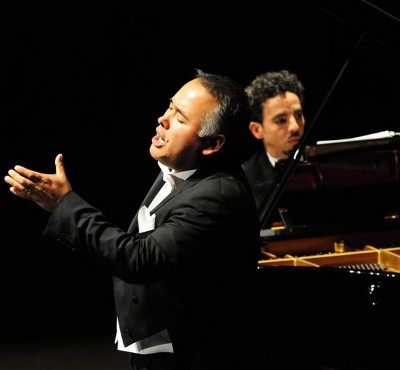 Camarena’s mellifluous bel canto tenor was showcased in a program of art songs offered in German and Italian, accompanied by the responsive pianist Ángel Rodríguez. The selections found the tenor in refulgent vocal estate and entirely within the emotional world of the music.

The voice is one of great beauty, its registers cleanly knitted together, and it displays unusual facility in florid writing. One often encounters a trace of an edge in voices of this type, but Camarena actually appears to gain heightened roundness and aural plush above the staff, which allows his intrinsically lightly textured sound to acquire a heroic ring.

The recital opened with Beethoven’s three Op. 83 songs inspired by poems of Goethe. These rather pensive pieces immediately established the arresting beauty of Camarena’s timbre, as well as his skill in velvety legato.

Next came Liszt’s three very tenor-friendly Sonnets of Petrarch, which provided a welcome glimpse of Camarena’s ability to float into his upper register. There was some particularly beautiful dynamic shading in “Pace non trovo,” (I find no peace), especially in the diminuendo applied to the phrase “Ed ho in odio me stesso, ed amo altrui” (I love another, and yet I hate myself) and in the clarion tone which rang forth in the arietta’s final phrases.

The second half of the program was entirely devoted to the songs of Francesco Paolo Tosti, including a poignantly delivered “Sogno” (Dream) and as lovely a traversal of the thrice-familiar “Ideale” (The Ideal) as memory can recall.

Given that Camarena’s voice is one that becomes extraordinary on high, one might argue that his choice of repertoire did not consistently display him to full advantage. No such charge could be levied against his generous helping of encores, which provided the greatest thrills of the evening. The tenor answered cries for Donizetti’s “Ah! mes amis” with a delightful account of the aria, each of those top C’s gleaming and perfectly in place (“So, you like high notes?” he quipped, charmingly). (You can watch him do the same in a Madrid performance, below.) He then acknowledged the presence of a sizable contingent from Chicago’s Latino community among the audience and launched into a blazing account of “Júrame” (Swear to me), a popular 1920’s hit by composer María Grever made famous by tenor José Mojica. This was followed by a deeply felt “Granada” and an improvisation on a mariachi theme that all but brought the house down.

Through it all, Camarena’s stage demeanor radiated ingratiating warmth graced by a quicksilver smile that appeared almost deceptively shy, as the guy obviously knows how to work a crowd. A wolf whistle from the house was countered with an impish bit of preening. This was a treasurable evening spent with a most impressive singer.