Chicago Shakespeare also announces “Our City, Our Shakespeare” fundraising initiative for capital, artistic and endowment funds has reached 73% of goal

Introducing a global trend in theater architecture to Chicago, the vision for the new theater focuses on resourceful, sustainable and adaptive design. At a cost of $35 million, the project repurposes components of the venue formerly known as Skyline Stage, located adjacent to Chicago Shakespeare. The Yard is connected to the existing facility, which currently houses two theaters, through expanded lobbies. The year-round, flexible venue can be configured in a variety of shapes and sizes with audience capacities ranging from 150 to 850, defining the audience-artist relationship to best serve each production.

The Yard at Chicago Shakespeare is integral to Navy Pier’s Centennial Vision, a reimagining of the Midwest’s most visited leisure destination celebrating its 100th anniversary this year. The new and renovated features are designed to expand Navy Pier’s impact and audience, showcasing a vibrant cultural, environmental, educational and recreational landscape. Building on the Theater’s 16-year partnership in residence on Navy Pier, The Yard will be funded through a $15 million investment by Navy Pier, Inc. along with $20 million in capital funding raised through Chicago Shakespeare’s Our City, Our Shakespeare Campaign.

To realize Chicago Shakespeare’s plan for what a next-generation performance venue should be, the Theater has assembled world-class partners including award-winning, UK-based theater and acoustics consultancy firm Charcoalblue-whose recent pioneering projects include venues for the Royal Shakespeare Company, National Theatre of Great Britain and the newly opened St. Ann’s Warehouse in Brooklyn, New York-and Chicago-based Adrian Smith + Gordon Gill Architecture. Together, they have designed a space that is forward-thinking, surprising, raw and provocative-reflective of the dynamic work of Chicago Shakespeare’s multi-faceted artistic vision and the variety of audiences engaged across the Theater’s programming.

The design smartly repurposes the existing Skyline Stage by constructing a fully enclosed, indoor theater chamber beneath the landmark white dome, utilizing the existing stagehouse and backstage support spaces. A movable set of structural audience “towers” creates a radically new performance arena, which can be reimagined and adapted to the widest range of artistic visions by designers and directors-from an intimate theater in the round to an 850-seat proscenium house. Each mobile tower-the size of a city bus stood on its end-contains three levels of seating. These complex structures, pioneered for this design, house extensive theatrical technology, and connect into a network of HVAC components and sprinkler systems to accommodate audience comfort and safety. The iconic white tent becomes a canvas for projection and lighting design that will animate the exterior shell of the facility. 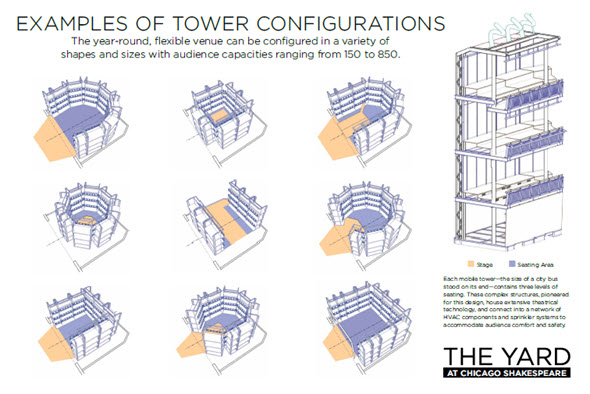 “Creating this state-of-the-art performance venue is another step in the redevelopment of Navy Pier to ensure that it remains one of Chicago’s premier centers for commerce but also for culture and I want to thank Chicago Shakespeare for their tremendous contribution to that effort,” said Mayor Rahm Emanuel. “There is no better time to announce this new performance space than in the year when we will bring local and international artists together for Shakespeare 400 Chicago, which will keep the spirit of Shakespeare alive in our schools and on our stages. I look forward to watching The Yard at Chicago Shakespeare become one of Chicago’s next great cultural jewels for years to come.”

The Yard will be Chicago Shakespeare’s third stage and, together with the two existing performances spaces, positions the Theater to amplify its artistic vision and community impact-expanding audiences and its service to Chicago schools through its nationally recognized arts-in-education programs. Chicago Shakespeare is an internationally award-winning theater-annually producing as many as 650 performances of 19 productions, including audacious imaginings of Shakespeare’s plays; acclaimed new works and musicals; engaging productions for young audiences; extensive education programs; and vibrant productions from internationally renowned artists that connect Chicago to the world.

“We’ve long needed a third theater, but we knew that a fixed theatrical space would not serve next-generation theater makers or the artistic ambition of our company,” shared Chicago Shakespeare’s Artistic Director and founder Barbara Gaines. “The Yard will offer a new kind of venue, one that allows us the freedom to reconfigure and recalibrate a playing space each time we approach it. The Yard has been designed as a fun, responsive theater that will adapt to artistic impulses. It offers the volume for us to dream bigger, engaging future audiences in surprising and provocative ways.”

“The Yard demonstrates that a creative, yet economical approach can revitalize an existing facility and transform it into a world-class resource for education and entertainment,” noted Executive Director Criss Henderson. “By adding The Yard, Chicago Shakespeare’s home will feature three diverse theatrical platforms: an Elizabethan-style courtyard theater; an intimate studio theater; and a flexible ‘state of the imagination’ theatrical venue. Thanks to our partnership with Navy Pier and the generosity of a community of donors, this expanded campus will allow us to foster the work of the leading theater artists of our time; produce and present theater that breaks traditional boundaries of expression; extend popular productions; and double our service to students and teachers.”

The development of The Yard at Chicago Shakespeare marks a significant milestone in James Corner Field Operation’s Pierscape redesign project as part of Navy Pier’s Centennial celebration. The multiyear effort, which began in Fall 2013, is transforming the Pier’s 50 acres of premier urban waterfront into a spectacular, global destination and treasure for Chicago and its guests.

The redevelopment builds on the strengths of the Pier-its singular location along the edge of Lake Michigan and downtown Chicago, its size and scale and its programmatic richness. It seeks to enhance the experience for current guests while drawing new audiences with evening and year-round entertainment and cultural attractions. Also, through the generous legacy gift from the Polk family, legendary Chicago retailers and longstanding benefactors to Chicago and its neighborhoods, Navy Pier is reimagining its arts and discovery programming, as well as its 13-acre entrance, now known as Polk Bros Park, with new multi-stage performance lawns, public fountain and expansive promenade.

Navy Pier’s Centennial Celebration will kick off with the opening of the new Ferris wheel on May 27, followed by the unveiling of the Polk Bros Fountain and Plaza, Louis Vuitton America’s Cup World Series Chicago from June 10 through 12, 4th of July celebration, Tall Ships Chicago from July 27 through 31, and the opening of The Yard at Chicago Shakespeare in Fall 2017.

“Chicago Shakespeare and Navy Pier have had a visionary partnership since the forward-thinking decision to bring the Theater to our venerable civic space in 1999,” explained Marilynn Gardner, President and CEO of Navy Pier, Inc. “With the Theater’s proven track record for serving the community and creating award-winning performances, we are confident that this investment will lead to a successful second act. This expansion, new dining options and the completion of the Pierscape plan will not only enhance the theater-going experience for guests, it will continue to elevate Navy Pier as a major cultural destination and growing draw for worldwide visitors to Chicago.”

“The development of The Yard comes at a momentous time in the history of Navy Pier,” added William J. Brodsky, Chairman of Navy Pier, Inc. “As our Centennial Vision rapidly comes to life with more dramatic public spaces, expanded year-round programming and new entertainment options, this redevelopment of what is already a Chicago and Navy Pier treasure will enable us to bring even more theatrical prestige to our city. Such an ambitious and progressive plan could only come about with the pitch perfect collaboration of two forward-thinking governing boards, both in synch with the goal of providing Chicago with a world-class theater housed at one of the most dynamic, culturally-rich destinations in the world.”

Adrian Smith + Gordon Gill Architecture (AS+GG) is dedicated to the design of high-performance, energy-efficient, and sustainable architecture. AS+GG approaches each project with an understanding that architecture has the unique power to influence civic life. The firm strives to create designs that aid society, advance modern technology, sustain the environment, and inspire those around us to improve our world. In addition to several Cultural and Mixed-use projects in the United States, AS+GG is currently designing projects for Saudi Arabia, Dubai, Kazakhstan, China, and Canada. The firm was founded in 2006 by partners Adrian Smith, Gordon Gill, and Robert Forest.