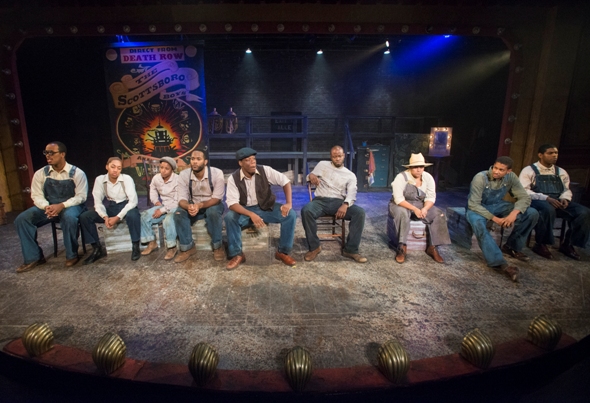 Opening with a run of Midwest premieres, Raven Theatre expands from four plays to five this season to capitalize on the opportunity offered by its dual performing spaces. And first up is a Mark Stein’s searing “entertainment” with the long, ironically evocative title of “Direct from Death Row: The Scottsboro Boys (An Evening of Vaudeville and Sorrow).”

“I suspect this is a part of American history that a lot of people are not familiar with,” says Raven’s founding aristic director, Michael Menendian. “Nine young African-American boys, ages 12-18, hoboing on a train – something a lot of people did during those Depression years – from Chattanooga to Memphis. Some white women falsely accuse them of rape. The incident became a cause célèbre.”

A second Midwest premiere, Boo Killebrew’s “The Play About My Dad,” which recalls one family’s immersion in the perils and tribulations of Hurricane Katrina, leads to yet a third: Horton Foote’s “The Old Friends,” which examines the moral canker that infects some Texans of great wealth.

It will be Raven’s third straight season to present one of Foote’s plays, following “The Trip to Bountiful” and “Dividing the Estate.”

“We got the rights to ‘The Old Friends’ through (the playwright’s daughter) Hallie Foote, who visited us during our run of ‘Dividing the Estate,’” says Menendian. “But this is not a story about inheritance. It’s about people who have more money than they know what to do with. It has some of intensity of (Edward Albee’s) ‘Who’s Afraid of Virginia Woolf?.’ A widow returns home to Texas from South Africa penniless, and has to  make a new life amidst materialism, greed and alcohol.”

Raven’s robust plan for 2015-16, its 33rd season, includes three productions in its larger, 130-seat venue and two in the more intimate 60-seat theater.

“Because we present rental shows, I think there’s been some confusion about Raven’s identity in the public view,” says Menendian. “We want to put our own stamp on this theater, and to that end we’re expanding to five shows with a second production in the smaller space. We intend to make this place work for us, for Raven.”

Raven Theatre,  located at 6157 North Clark Street, on the corner of Clark and Granville in Chicago, primarily serves the city’s far north communities of Edgewater, Rogers Park and Andersonville, though it can also claim a broad base of support from across the Chicagoland area.  Easily accessible by car, the theater is 15 minutes from the Eden’s Expressway (Peterson exit east) and 5 minutes from the north end of Lake Shore Drive. It’s also convenient by train. Take the Red Line to the Granville station, then walk west on Granville to Clark Street.