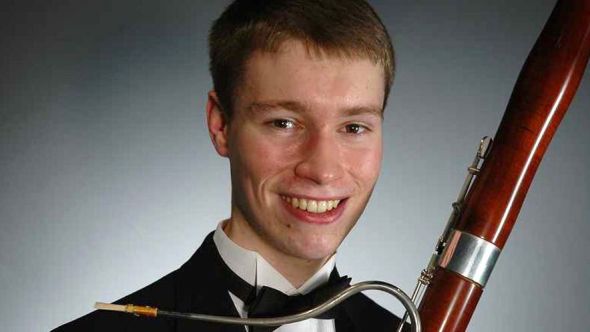 Report: Bassoonist Keith Buncke was still a Curtis Institute student when he won the principal position with Atlanta Symphony at 20. Now 21, he has taken a second bounce, and it’s a big one — to the CSO.

Almost faster than you can scrape a double reed, Keith Buncke has carved his way from conservatory student days to the top bassoon job at the Chicago Symphony Orchestra, with a short pause in Atlanta. Buncke has told Mark Gresham at ArtsATL.com, an Atlanta cultural website, that he was one of three finalists in Chicago on Jan. 12 and learned on Jan. 19 that he is green-lighted to succeed longtime Chicago Symphony bassoonist David McGill, recently retired.

Although there is no confirmation from the CSO, director of public relations Rachelle Roe confirmed that “auditions have concluded, and a winner was chosen.  We will make an announcement when we have a signed contract.”

The principal bassoon job is one of several high profile jobs the CSO has needed to fill. Successors are being auditioned for Dale Clevenger, the orchestra’s legendary principal French horn, who has retired, and principal flute Mathieu Dufour, who has departed for the Berlin Philharmonic. Meanwhile principal oboe Eugene Izotov has announced he will take a leave of absence to spend the 2015-16 season with the San Francisco Symphony. Thus music director Riccardo Muti is in a position to profoundly reshape the sound of the CSO through appointments to these key positions.

Buncke was still a junior at the Curtis Institute in Philadelphia when he won the Atlanta Symphony Orchestra position in February 2014. And because of a labor dispute in Atlanta that delayed the opening of the orchestra’s 2014-15 season, Buncke has actually been performing as its principal bassoonist for only a few programs since mid-November. Nevertheless, fellow Atlanta Symphony bassoonist Juan de Gomar told ArtsATL.com that “his artistry is sublime. He performs with a sophistication and beauty of understatement that is at the absolute highest level.”

Buncke told Gresham that he was “not bouncing off the wall” when he learned the news, because he was still mulling what he could have done better at the audition. “I was not really on cloud nine until several hours later,” he said.