NEW YORK – Each time I revisit Ayad Akhtar’s play “Disgraced,” this concise modernist morality tale — about a successful Pakistani American lawyer whose life turns to smoke before his very eyes — feels more potent and unnerving. Indeed, the latest incarnation, at the Lyceum Theatre on Broadway, is nothing short of devastating.

Before hitting Broadway, “Disgraced,” winner of the 2013 Pulitzer Prize for Drama, bounded from its starting point at American Theater Company in Chicago to a run at Lincoln Center in New York. All three stagings have been the work of Chicago-based director Kimberly Senior, and the sequence has displayed a steady sharpening of her perspective, an ever firmer grasp on the conflict and torment that push the play and pull its anti-heroic protagonist toward inexorable ruin. 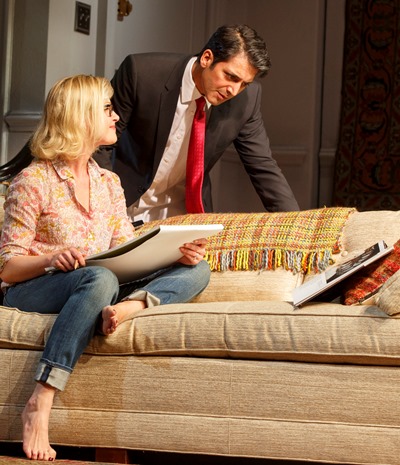 If Akhtar’s grim, albeit comedy-laced, story bears the resonance of Greek tragedy, perhaps one might also say the gods do not love the beleaguered Amir. He’s a seemingly solid guy who lives in an elegant upper east side New York apartment (designed by John Lee Beatty) with his beautiful blonde wife Emily. Amir prides himself (there’s a Greek flaw) on $600 shirts and stands at the cusp of a partnership in the law firm where he works.

But in this dog-eat-dog world, it’s sometimes hard to tell when a man’s best friend is after all just another canine. When Amir missteps, in a gesture to appease his wife, the smiles around him suddenly take on the aspect of bared teeth.

Hari Dhillon’s Amir is the very picture of an all-American success: tall, dark, handsome, exuding authority and confidence. Amir is smart and a workaholic, by his own reckoning the first to arrive at the office and the last to leave. And Emily, an accomplished painter fascinated by motifs in Arabic art (and played with pushy exuberance by Gretchen Mol), adores him. She also wants Amir to do the morally right thing about an imam who’s been jailed under suspicion of abetting terrorists. 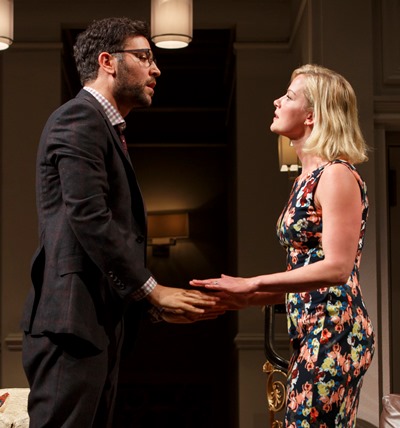 Emily insists that Amir, who began his career as a public defender, must visit the imprisoned imam, who has refused counsel from anyone not Muslim. Actually, Emily is seconding the plea of Amir’s teenage nephew Abe (formerly called Hussein), a Pakistani transplant (Danny Ashok) who’s been hammering on Amir to lend a legal hand – at least just go talk to this gentle old man. But Amir keeps reminding nephew and wife that he long ago turned away from his Muslim heritage. He’s not Muslim, period. But he is Emily’s loving husband. What’s a guy to do?

His ultimate decision resets his life into a line of dominoes. Watch them fall, and see what thin tissue can pass for friendship. Amir and Emily’s best pals are Isaac (Josh Radnor), a Jewish art curator, and his African American wife Jory (Karen Pittman), an attorney who works in the same firm as Amir. Playwright Akhtar’s real virtuosity shows when the four get together for dinner in the aftermath of Amir’s modest gesture on behalf of the imam. 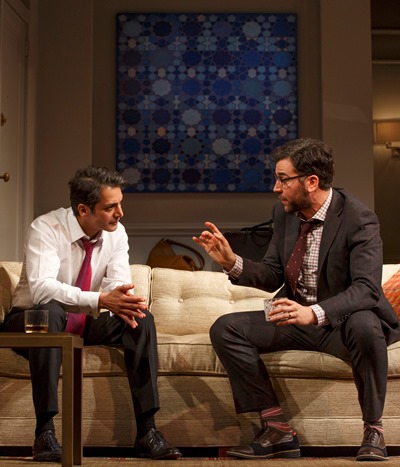 With a couple of drinks as lubricant, Dhillon’s suddenly edgy Amir offers a provocative comment on the 9/11 terrorist attack. Radnor’s aggressively — one might say pretentiously — intellectual Isaac, shocked and incensed, lectures Amir on the Quran, though he knows only secondary sources and has never read the text itself – which prompts Amir to up the ante to a more personal level. What explodes into a verbal, ethnically charged brawl is suspended only when Emily drags her husband away for a stern reproach. But the evening isn’t over, and it’s about to get worse, then worse still; and degree by awful degree, Amir sees his personal history – his ancestry – rise up to ensnare him. He cannot escape who he is. He cannot escape knowing who he is. The American dream belongs to others; this Muslim-by-association has awakened into a nightmare.

Although the intense confrontation at dinner comes close to blows, it stops short; but another flare-up does not. In previous productions director Senior has reduced that violence to off-stage sound effects. Not here. This time, we see it center-stage, even if not quite in full view — and it is chilling, and heartbreaking. We watch a man drive a stake through his own soul.

There’s an epilogue to Amir’s descent from the mountain top of capital gain. He is not the only one disillusioned. Nephew Abe – did I say formerly Hussein? – shows up with a problem of his own, and a new slant on life in the land of milk and honey. Seems everything’s right in America, if you are white in America. Call this Upper East Side Story.