Review: “The Emperor of Atlantis” by Viktor Ullmann, “The Clever One” by Carl Orff, presented by Chicago Opera Theater at DePaul University through June 8. ★★★★

When opera is really working as theater, you tend to forget you’re listening to sung speech as you lose yourself in drama’s thrall. That’s precisely the effect in Chicago Opera Theatre’s potent evening of one-act rarities:  Viktor Ullmann’s darkly surreal “The Emperor of Atlantis” and Carl Orff’s wry parable “The Clever One.” 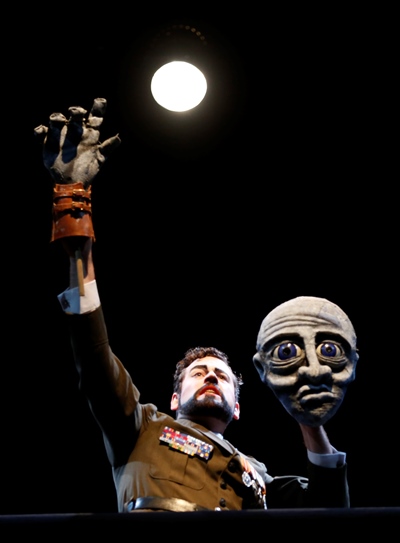 The provenance of Ullmann’s opera is almost as fascinating as the work itself. It was created in 1943 at Theresienstadt concentration camp, the Nazis’ cultural showplace where the world was allowed to observe that things really weren’t so bad for the Jews. For an Augenblick, anyway.

Some very gifted composers at Theresienstadt produced – or more to the point, left behind – a significant body of work. Among them was Ullmann. A former pupil of Arnold Schoenberg, he was more of a modernist than the eminently approachable music of “The Emperor of Atlantis” might suggest. But what the work lacks in harmonic edge it more than makes up in mordant satire of life and its brevity.

Ullmann’s cheeky collaboration with librettist Peter Kien, intended for production at the camp, got as far as the final rehearsal when incensed officials put a stop to it and promptly shipped off composer, librettist and everybody else associated with the venture to Auschwitz. 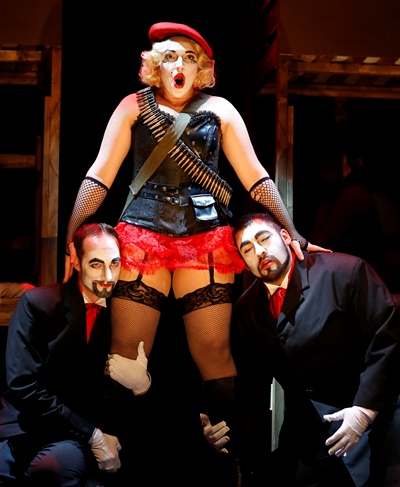 Whether the whole enterprise was a collective death wish might be ironic conjecture: The gist of the opera is that Death, annoyed by the presumption of the Emperor in usurping his role, decides to take a holiday. No one will be allowed to die – not the hanged prisoner, not soldiers horribly wounded in combat or the general populace as it ages and suffers. Only when the Emperor, called Überall (as in Deutschland über Alles), submits to Death’s conditions does the Reaper once more allow people to expire.

While “The Emperor of Atlantis” subverts commedia dell’arte clownishness – there’s even a miserable Harlequin, expressively sung by tenor Bernard Holcomb – within a dark milieu of surrealism, Ullmann’s music is quite engaging, managing a fine line between lyricism and stridency. And it is sung by an excellent cast led by bass-baritone David Govertsen as Death, with baritone Andrew Wilkowske as the Emperor and mezzo-soprano Cassidy Smith as the cabaret-style Drummer. Here, as in Orff’s “The Clever One,” great credit goes to the fluent musical direction provided by conductor Francesco Milioto and to Chicago Opera Theater’s artistic director, Andreas Mitisek, who designed and directed both productions with fetching imagination.

Whereas Mitisek sets “The Emperor of Atlantis” against the look of a concentration camp barracks, complete with bunks of rough plywood, he takes a radically different approach with “The Clever One,” giving it a cartoonish aspect befitting this story-book morality play.

The clever girl of the title (soprano Emily Birsan) is the daughter of a peasant who gets himself into hot water with the King, and into prison, over a golden mortar and pestle. When the girl appeals to the King for her father’s release, his majesty confronts her with three riddles, which she readily solves. He’s so impressed that he marries her, only to send her packing when her wit gets the better of him. Yet in the end, the girl’s cleverness lands everyone in a happy place. 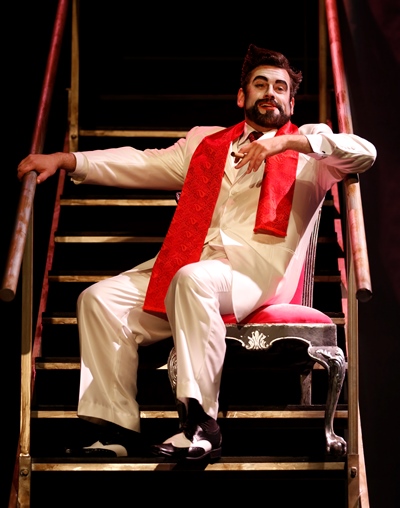 Based on a story from Grimm’s fairy tales and composed to Orff’s own libretto in 1943, “The Clever One” follows by six years the single work for which he is generally known: “Carmina Burana.” And if you love that, you will feel very much at home with this witty little opera, which pervasively echoes the style, harmonies, color and rhetorical gestures of Orff’s famous cantata.

And Mitisek’s production is a thorough delight, brought off by a sympathetic, rollicking and vocally capable cast with Milioto again managing the musical structure and details with aplomb – and his chamber-size orchestra sparkling here as it did in Ullmann’s score.

The centerpiece of Mitisek’s setting is a span of three wide, abutted rolls of paper suspended above the stage and constantly cranking down clean surfaces for video projections, scrawled images and snipped apertures for heads and other objects to appear. (The video images and puppetry for this double bill are the inspired creations of Sean T. Cawelti.) Thus the clever girl’s father appears before the King with head and hands poking through a paper-doll jail-bird overlay, and a huge box score is kept as the girl answers the King’s riddles. 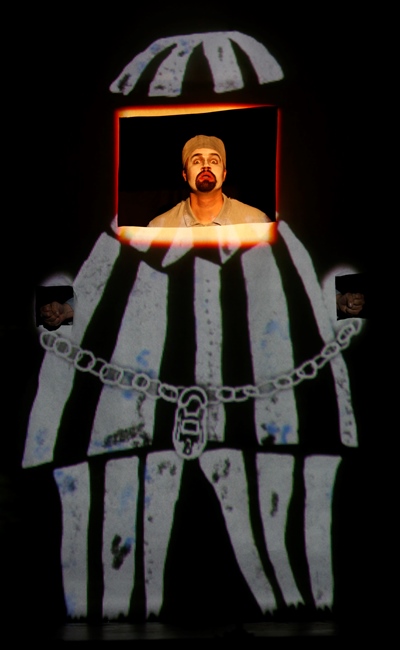 That look and spirit extends to costumes and performances, notably in the King (Andrew Wilkowske in another fine turn) and three drunken buffoons played with great commedia dell’arte flair by William Dwyer, Matthan Ring Black and Paul Corona. For sheer vocal splendor, however, Emily Birsan’s bright, agile singing as the clever girl crowned the night.

The intimate space of DePaul University’s Merle Reskin Theatre proved ideal for these chamber operas, allowing the young singers to project easily, a small instrumental ensemble to create a rich sonic blend and even subtle gestures by this skilled group of actors to register distinctively and expressively. It’s an attractive option for Chicago Opera Theater when its home at the more ample Harris Theater seems too grand for a hatful of magic.