‘Clybourne Park’ at Redtwist: In a tight space, prejudice runs riot and hurt explodes in rage

There’s garden variety theatrical intimacy, and then there’s the astonishing, welcome-to-the-family tumult of Bruce Norris’ “Clybourne Park” in the living room space that is Redtwist Theatre.

This is one occasion when being a fly on the wall would at least mean you were positioned at a safe distance. The feeling you get at Redtwist, as Norris’ characters begin to snipe at each other and tempers flare, is that of a mouse under the table. Nowhere to run to, nowhere to hide. 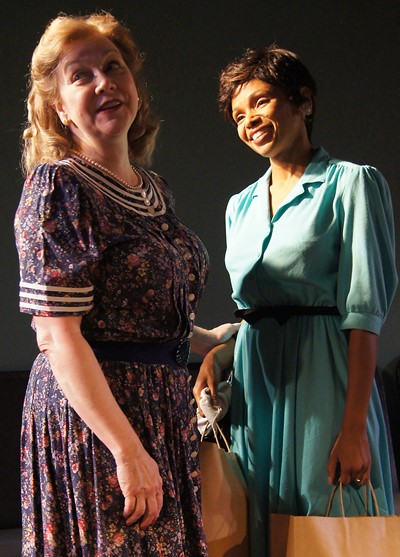 What turns mere intensity into a theatrical thrill ride is the conviction of all these warring folks (six actors playing two sets of characters) and the polished confusion of their combat. Redtwist’s “Clybourne Park,” directed by Steve Scott, stands among the peak stage experiences of the season’s autumn half.

Picking up where Lorraine Hansberry’s “A Raisin in the Sun” leaves off, Norris’ play – set in the fictional, all-white Chicago neighborhood of Clybourne Park – opens in 1959 with the first sale of a home to a black family and the community’s frantic resistance. The play’s second part, 50 years later, finds a young white couple about to take over the same house in what is now a black neighborhood, but with the intention of tearing it down and building something larger – to the chagrin of a young black couple who wish to preserve the traditional look and feel of their community.

However, it isn’t quite as simple as the same prejudice seen from two perspectives. What Norris has wrought here is a broad satire of a society riven with all manner of alienation, and the hurt that comes of it.

Brian Parry and Jan Ellen Graves are roundly satisfying as the middle-aged couple of Act I who have sold their home – unwittingly – to a black family. They are grieving over the suicide of their son, an emotionally troubled war veteran. Even as this heart-broken mother and father chat about the advantages of the home they will soon occupy, she’s anxious about leaving her friends and he simmers with anger at neighbors who shunned their afflicted son.

The emptiness of their hearts is reflected in the spare set Ross Hoppe has sprinkled into the tiny performing space: a table and some chairs, a couple of packing boxes. No place to hide, only room to suffer.

Into this fragile circumstance comes an untimely guest, the pastor of the couple’s church (played with oily righteousness by Michael Sherwin), whose presence and moral prating only rouse the husband to plain-spoken anger. And right behind the preacher arrives Karl, spokesperson for the Clybourne Park neighborhood improvement committee – the one committed to keeping the streets white.

Pat Whalen’s smarmy Karl is a buttoned-down picture of suppressed hysteria. Some of the play’s sharpest wit bursts from the increasingly direct exchanges between Whalen’s committeeman-on-a-mission and Parry as seething father of a son destroyed. And Carley Moseley is a delight as Karl’s pregnant, deaf wife, cheerily clueless about the rising tide of wrath around her. 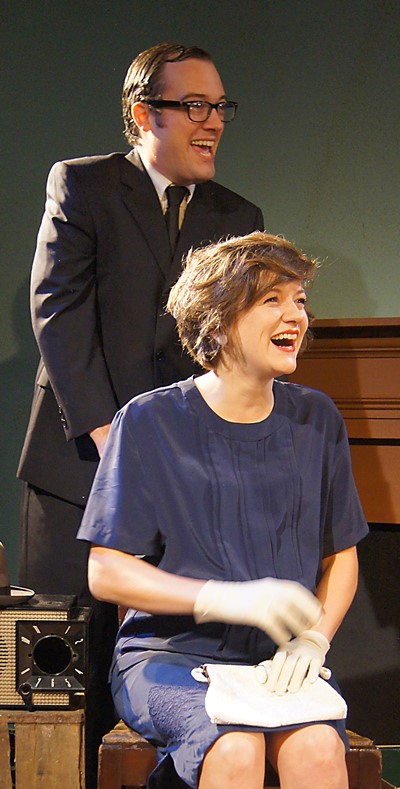 On the significant fringe of the first act are two black characters, one the housekeeper in this home (Kelly Owens) and the other (Frank Pete) her husband, come to pick her up. As they get dragged into the testy debate about letting black people buy in the neighborhood, Owens and Pete become fascinating opposites, the maid trying not to fan the flames and her husband taking ever sharper offense at the ever more overt innuendoes.

The sale goes through, of course, and so we leap forward 50 years in Act II to a scene in the same house and a new generation of adversaries. If good first acts are essential, it’s good second acts that make for great plays, and Norris’ Act II is a beaut; it is indeed a tour de force of patient situation build-up that gives way to brilliantly swift dialogue ending in an emotional free-for-all, much in the vein of Yasmina Reza’s “God of Carnage.”

In other words, what begins in civil discourse — between a white couple moving into the now-black neighborhood and a protective black couple who want to ensure a sort of environmental continuity — steadily breaks down into unrestrained salvos in the most vulgar terms. Caught in the middle this time are a real estate lawyer and architectural monitor (both white), who soon enough find themselves stung by caroming epithets and so jump into the fray themselves.

Which of Redtwist’s fine sextet of actors plays which role in this second go-round hardly matters: Ensemble is all, and the ensemble is scintillating. What’s more, the whole nasty affair explodes right in the viewer’s face. It’s quite daunting to behold at that point-blank range, crazily funny and yet mortifyingly truthful.

“Clybourne Park” does not end in madness. It ends in sorrow, with an epilogue that touches real disillusionment, loss and pain. And it is played by Jan Ellen Graves and Kaelan Stouse with crushing tenderness.