Upon thoughtful examination, the outwardly splendid edifice that is Bruckner’s Fourth Symphony reveals a no less magnificent interior. Articulating the one aspect without losing sight of the other might even define the work’s core interpretive challenge. Inside and out, front to back, conductor Bernard Haitink led the Chicago Symphony Orchestra in a performance of consummate completeness Thursday night at Orchestra Hall.

Haitink, who turns 85 next March, is arguably the preeminent Bruckner conductor of our time. Watching him turn pages of his score as this exquisite Fourth Symphony unfolded, I wondered if he did so more from habit than necessity. Beyond any question, the music emanated not from those printed sheets but rather from Haitink’s essence as musician and maestro. Through the most efficient of gestures, the conductor elicited the full Brucknerian soundscape, a Sistine ceiling of the divine conjoined with the herebelow. 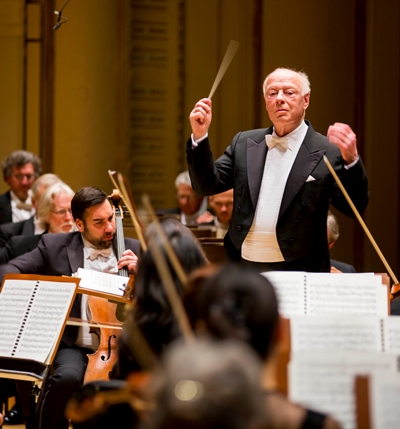 How ironic to experience such perfect equipoise – on such a grand scale – in a work that, like most of Bruckner’s symphonies, cost the composer grave self-doubt made the worse by the second-guessing and badgering advice from critics and close friends alike. And how telling the juxtaposition of the much-revised Fourth Symphony and Mozart’s impeccable Piano Concerto No. 27, doubtless wrought in a characteristic single pass. The comparison only made one more appreciative of Bruckner’s inspiration, originality and craftsmanship.

Which really is to say that Haitink brought to the large forces of Bruckner’s hour-plus symphony the same conviction, clarity and fluency he applied in the chamber-orchestra setting of Mozart’s concerto (with soloist Emanuel Ax).

The Fourth Symphony plays out on an epic time-line, not merely in terms of minutes passing but in the structural (and emotional) sense. Haitink engaged this unhurried musical evolution on Bruckner’s own terms. Tempos were expansive, expressive inflections modest and gemütlich – the more wondrously to set off the signature grand climaxes.

Haitink and the CSO know each other so well that a flick of the baton, a turn of the maestro’s hand communicates volumes – and elicits whole tapestries of intricate response. The strings’ radiant playing throughout set off lyrical flights by flute, oboe and clarinet. In the slow movement, Bruckner gives the violas a rare chance to sing alone – in something of a yearning ballad – and this choir made the moment flow.

In the great brass fanfares of the opening movement and, especially, the finale, the playing burst with power and light. And everywhere, the orchestra fairly hummed with the deep-level rhythmic pulse that can make this symphony push forward with deceptive speed. I doubt that many in the hushed audience were checking their watches. The sense of engagement – conductor and orchestra and listeners all wired to the same pulse – was palpable. It was like Mozart made monumental. 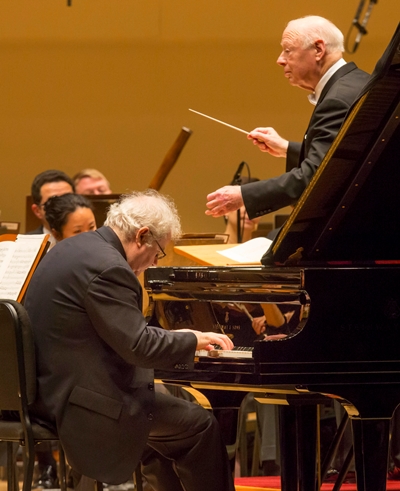 Mozart at standard size opened the program: an infectious performance of the 27th Piano Concerto in which Ax and Haitink gracefully bobbed and weaved together like longtime chamber music partners. The concerto’s slow central movement is its heart, and a wistful one. Ax’s soulful playing evoked the Countess Almaviva’s heart-broken aria “Porgi, amor,” at the opening of Act II in “The Marriage of Figaro.” The pianist captured this operatic quality without allowing the musical line to turn flaccid, or to become a caricature.

Opera flies out the window in the concerto’s finale, a lightly skipping rondo that Ax delivered with equal parts of weightlessness, precision and elan. For their part, Haitink and the CSO provided attentive accompaniment laced with witty commentary. This was Mozart crisp, bright and adorable.