On the last day of May, full summer beckoning, Dutch conductor Jaap van Zweden led the Chicago Symphony Orchestra in a performance of fresh abundance, showcasing the virtuosity of the CSO musicians themselves in Béla Bartók’s Concerto for Orchestra, and also turning the spotlight on two youthful artists of distinction — composer Mason Bates and pianist David Fray. 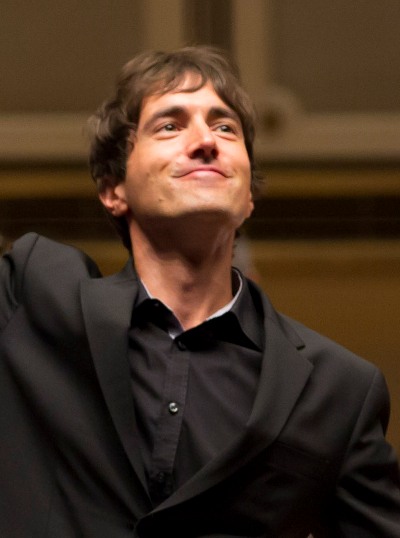 Youthful, but no longer youths, Bates at 36 and Fray at 32 have already found their individual voices. On the docket was a 2007 work by Bates called “Liquid Interface,” which bears the imprint of a compositional vision that continues to this day — an orchestral focus that loves the strings, winds and brass but also the dance-inspired, pulsating rhythms of electronic music and its ecstatic sound world.

For Bates, who is one of the CSO’s composers in residence, the percussion section is alive with new and almost endless possibility. And for him the realm of captured and computer-generated sound is a logical extension of the traditional orchestral palette. The connections between these realms, and their ability to influence each other by co-existing, blending, and pivoting from one into the other, will doubtless continue to be a subject of Bate’s compositional focus for years to come.

“Liquid Interface” has a stated programmatic theme — water in a warming world — but it probably doesn’t need one. The second movement, called “Scherzo Liquido,” did achieve some appealing dappled effects that sounded like drops of water randomly falling on various surfaces in a frigid spring, but it could just as well have been enjoyed in the abstract for its clever sonic cominglings. And the pastoral nature of the final movement, called “On the Wannsee,” can be appreciated whether or not one hears a lakeside summer in it. It takes artistic poise to end a 23-minute work with prolonged evanescence rather than fast trumpeting glory. These quieter movements were actually more convincing than the ones that employed less subtle electronic sturm und drang. 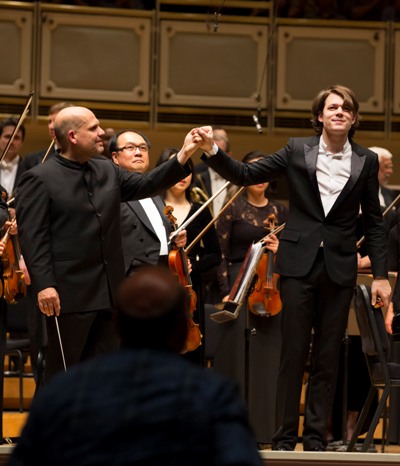 Both Bates and Fray had a collaborator with impeccable manners in Jaap van Zweden, who devoted himself to underscoring their specific strengths. In the case of Fray, who played Mozart’s darkly brilliant D Minor Piano Concerto, No. 20, in a manner that was both deeply personal and elegantly delivered, the conductor coaxed a lithe, fluid and bouyant accompaniment from the CSO musicians, who could be equally playful and headlong in their directness.

Fray chose the “bigger” romantic cadenzas among his options — in this case Paul Badura-Skoda’s first movement cadenza and Edwin Fischer’s third movement cadenza. It is evidence of Fray’s confidence in taking whatever he wants by way of inspiration from historical practice, along with the classical French aesthetic he grew up in, plus a rather contemporary revisionism, to chart his own path.

There is definitely a bigness to what Fray does — but his introspection, not to forget his manner of crouching over the keyboard with his head horizontally in line with his shoulders, makes you wish you were standing nearby onstage rather than sitting in one of 2,500 seats some distance away. When Fray figures out how to communicate with intense intimacy even in such a hall, he will conquer the world.

As for best performances of the CSO season, surely the Bartók Concerto for Orchestra is on an extremely short list. Van Zweden is wholly unlike Riccardo Muti, whose lyrical sensibility has brought a unique new dimension to the CSO’s character. But van Zweden’s chemistry with this orchestra is similarly miraculous, and in the best sense, complementary.

The orchestra plays full out for van Zweden, and the effect is never more impressive than when that “full out” is pianissimo. One was drawn in immediately by the eerie opening of the first movement, when the muted tremolos gave way to wind solos of unforgettable persuasion. The individual playing of the principals was outstanding throughout, most notably of flutist Mathieu Dufour and oboist Eugene Izotov, and there were delightful scherzando pairings of bassoons, oboes, clarinets, flutes and muted trumpets, not to forget the enhancing whispers of harp and strings.

As for the blazingly fast fugal finale, the only way to fully comprehend would be to slow it down by a factor of four or five so you could follow everything that’s going on. But that would take the fun out of it. It is the sonic equivalent of fireworks. The only manageable response is “Ooh and Aah.” 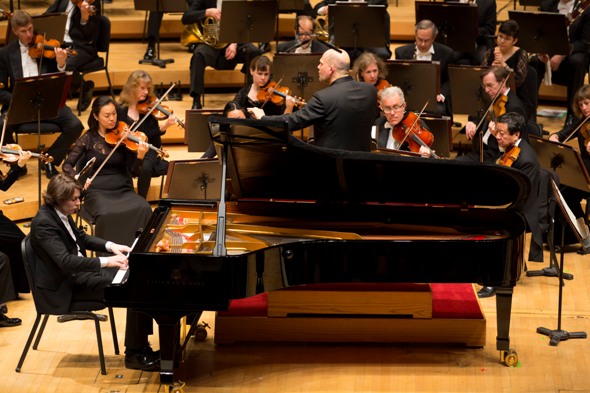