Robert Schumann’s Symphony No. 3 in E-flat isn’t known as the “Rhenish” for nothing. Even though it’s laid out rather freely along the lines of a classical symphony, and Schumann certainly construed it as such, it’s no less a symphonic poem – and one might argue no less personal – than, say, Berlioz’s “Symphonie fantastique” or, to go back to the roots of both, Beethoven’s “Pastoral” Symphony. 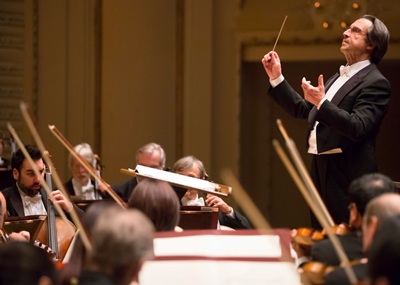 I felt very much like Schumann’s Rhine-journeying companion Thursday night, listening to the Chicago Symphony Orchestra’s radiant performance of the “Rhenish” Symphony conducted by music director Riccardo Muti. Unhurried, expansive, ruminative, and yet charged with life, it was music-making of the most intimate sort: one to one, the composer (embodied in Muti’s minutely expressive orchestra) and each single listener.

Over the course of its five movements, the “Rhenish” carries a willing spirit along the sun-splashed river and over meadows to the inner sanctum of the great cathedral at Cologne, then bursts once more into life-affirming light. It’s quite an outing, and the CSO captured it in vibrant colors.

What ultimately made this sublime travelogue so rewarding was Muti’s patient indulgence. He didn’t confuse vitality with urgency, but shaped each scenic tableau along broad lines, allowing Schumann’s underlying rhythms to urge the music forward even at restrained tempos. In the interior movements, languid solos by flutist Mathieu Dufour and oboist Eugene Izotov invoked a pastoral character enhanced by Muti’s clear articulation of winds against strings.

Robust brass fanfares in the first and final movements put one in mind of the glorious sound for which the CSO was known in decades past. It is still available to Muti when he wants it. But this is a conductor who measures his effects, whose base line is subtle gesture. Such was the substance and reward of this lovely water-color of a Rhine journey.

Speaking of finesse, and musical precision, how satisfying it was to have a fully intact performance of a Mozart piano concerto – with a conductor on the podium – amid the annual dual-role appearances by pianist Mitsuko Uchida that serve only marginally on the conducting side. 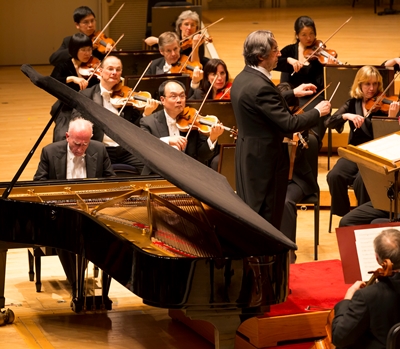 While the venerable Maurizio Pollini at age 71 may have ceded some of his once-formidable strength and facility, his performance of Mozart’s Piano Concerto No. 21 in C Major on Thursday night was a stylish delight, exuberant and sparkling in the outer movements and luminously introspective in the work’s lyrical interior.

But even before Pollini struck a key, this Mozart was clearly shaped and solidly grounded by Muti and a chamber-scaled ensemble.  The 21st Piano Concerto is one complex musical organism, at once symphonic and operatic, wistful and extroverted. Muti’s attention to every textural detail created not just an accompaniment or even a collaboration, but a theatrical framework – a proscenium – for Pollini. Hyphenating the tasks of conductor and pianist does not produce such a result.

This weekend’s program — Muti’s last in his current three-week visit with the CSO – features two infrequently heard overtures: Beethoven’s “Consecration of the House” is a late work that reflects the contrapuntal rigor of the last quartets as well as the Ninth Symphony even as it harkens back to the sundry overtures for “Fidelio.” The teenage Mendelssohn’s “Becalmed Sea and Prosperous Voyage” displays the fine touch of the “Midsummer Night’s Dream” music and, well, harkens back to Beethoven’s overtures for “Fidelio.”

Muti and the CSO infused both works with care and character that led one to wonder why these jewels are not encountered more often.