With Muti back at helm, Chicago Symphony applies classic touch to Mozart, Beethoven

The Chicago Symphony Orchestra’s Mozart-Beethoven concert Thursday night with music director Riccardo Muti felt like one long “aha!” moment. Here was the full measure of finesse, composure and pliancy the orchestra had expected to put on display for audiences in Southeast Asia with Muti at the helm, but in his absence never entirely achieved. 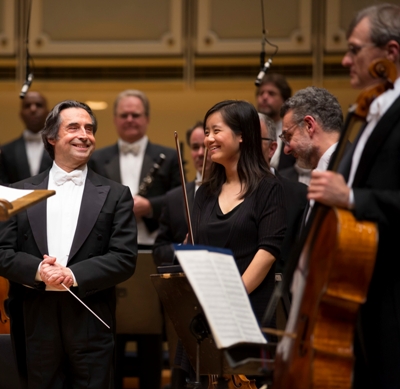 With the sequence of Mozart’s Symphony No. 38 in D (“Prague”) and Beethoven’s Symphony No. 4 in B-flat, Muti and the CSO reminded the faithful at Orchestra Hall just why they are such a perfect pairing, indeed a classical match. Scaled back to the proper size of a late 18th century court orchestra, the ensemble under Muti’s gently guiding hand delivered a pair of consummately stylish, exquisitely musical performances that left one wishing for nothing but to hear it again.

Muti, who will turn 72 years old in July and missed the Asia tour because of emergency hernia surgery, is now in his second week of concerts here since that rocky stretch back in late January. He looked a picture of health and vigor, once more characteristically at ease and assured, and this cut-down version of his orchestra seemed literally to vibrate in the renewal of their camaraderie.

The first indication of something special in prospect came with a Vivaldi warm-up, a sunny little Concerto for Strings in A Major that it turns out was last played by the CSO in 1975 – with Muti conducting. The clarity, warmth and buoyancy he now elicited from a handful of strings was about to be revisited on larger canvases, starting with Mozart’s “Prague” Symphony. 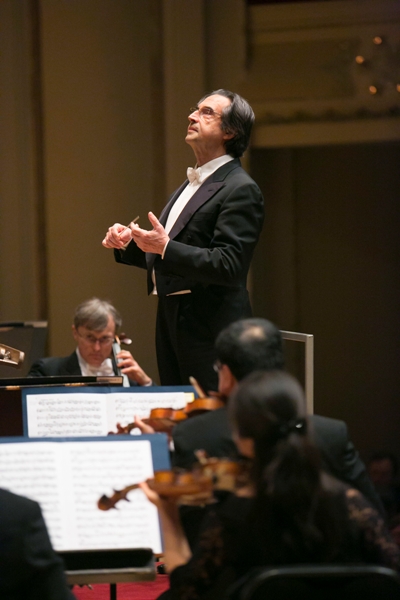 Much like Schubert’s two-movement “Unfinished” Symphony, or for that matter the three spacious movements of the Bruckner Ninth, the three-quarters of a symphony that is the “Prague” (it lacks the customary minuet) feels self-sufficient. In this instance Mozart’s plan registered as both musically fulfilling and dramatically complete.

Once again, Muti’s long career in the opera pit shed light on music written for the concert hall: The “Prague” Symphony dates from 1786, smack in the middle of the time when Mozart was creating operas like “The Marriage of Figaro” and “Don Giovanni.” The pathos, tenderness, shadows and wit of those stage works all were refracted through the prism Muti held up to this symphony.

Between the work’s animated and intricate outer movements – the bravura opening Allegro calls to mind the finale of Mozart’s “Jupiter” Symphony – Muti led a leisurely Andante that might have gone on forever in all the sparkling charm evoked by the strings and the delicately layering of woodwinds. Principal flutist Mathieu Dufour and principal oboist Eugene Izotov earned their rousing solo bows with playing of refined beauty and high spirits.

Beethoven’s Fourth Symphony, a robust work of deceptive finesse, bursting with the composer’s love of gruff humor, afforded an ideal foil to the “Prague.” If, like the Eighth Symphony, the Fourth has always dwelt in the shadows of adjacent towering symphonies with odd numbers, it also shared with the Eighth a special place in Beethoven’s affections. Both are personal, light-hearted, even unbuttoned expressions, and Muti’s account of the Fourth caught all the merriment and drollery at its essence.

Perhaps the single key to Muti’s infectious Fourth was its free-wheeling rhythms – that combined with a restrained hand on the throttle. Here was a joyful, unforced take on Beethoven as the Titan kicking back, noodling on manuscript paper, letting his invention run for his own amusement but building something as original and solid as it was spontaneous in effect, as sophisticated upon close listening as it is noisy on the surface.

The wholesale delight of this performance came to a head in Beethoven’s rambunctious finale, with its schizophrenic call-and-response, the fragile, glistening ideas ventured by high strings and winds answered by rollicking violas, cellos, basses and brasses. Beethoven must have had great fun writing these over-the-top exchanges. What Muti and company caught was not just the outward riot, but the brilliance beneath. 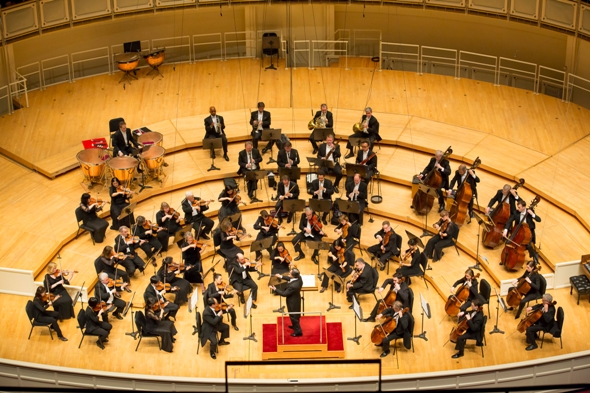