Interview: In Ida Lupino’s 1940s films, Turner found the heated presence and cool speech for her character in “City of Dreadful Night” at The Den Theatre. Through March 16.

Funny thing about film noir, says Justine C. Turner, who plays a sultry, sexy 1940s type in Don Nigro’s play “City of Dreadful Night” at The Den Theatre: It brought women out of the shadows, and made them multi-dimensional.

“That’s the really great thing about my character. Anna is complicated. She’s both Madonna and whore, not just one or the other but good and bad at the same time,” says Turner, who tuned up for the defining noir style of “Dreadful Night” by watching Ida Lupino films from the 1940s. “And she’s mysterious. She has some sort of secret.” 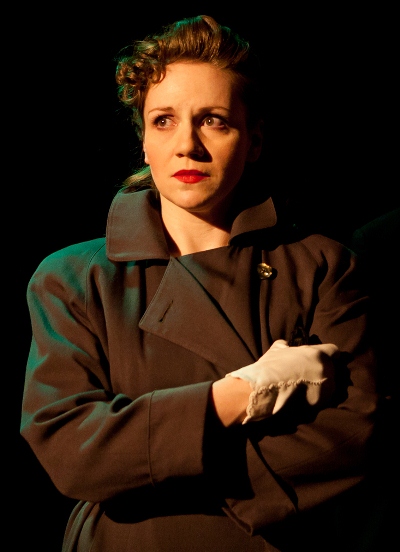 Anna’s one of those girls that gets under a guy’s skin. Her boyfriend, a small-time gangster called Gus (Matthew Isler) is sure she’s running around on him, so he enlists another thug, Tony (Sam Guinan-Nyhart) to follow her around for a while. Trouble is, Anna taps into Tony’s softer side and things get complicated.

All this is played out, to a conclusion worthy of Hitchcock, in the shadow-streaked lighting and rapid-fire, slightly oblique dialogue that marked those elusively expressive films. To begin getting that flavor right from the start in “Dreadful Night,” says Turner, director Ron Wells devoted the first rehearsal to a viewing of the 1944 classic “Double Indemnity” starring Fred MacMurray, Barbara Stanwyck and Edward G. Robinson.

“I love film noir and I watched scenes from a bunch of Ida Lupino movies on Youtube to get the dialogue and the look down,” she says. “Ron stressed from the start that he didn’t want a parody of noir. He wanted to capture that style and make it believable. He wanted us – and the audience – to feel this pervasive sense of urgency. All three of these characters urgently need something. They all have this longing. You can’t relax in to that. It has to be right there from the word go. The film noir was typically 90 minutes, and it was over. We needed to hit that with this play.” 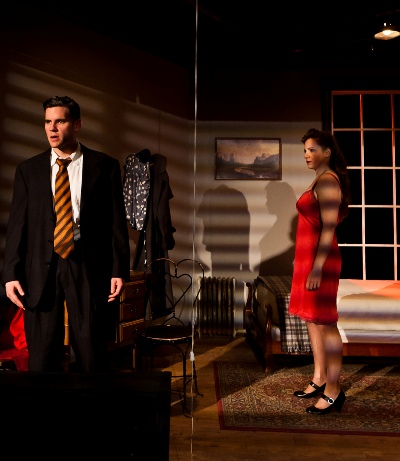 The hardest part, she said, was simply learning the brisk dialogue with its intricate switchbacks that seem to draw a line of thought like whipping thread, in and out of the fabric of a scene. “City of Dreadful Night” is an ensemble exercise par excellence. Making the dialogue crackle, in its throw-away fashion, meant some serious woodshedding.

“If you get caught in the wrong loop (of dialogue), you miss important cross-links that the audience needs,” says Turner. “It isn’t exactly natural speech, but when you finally get it, the language is almost poetic. And to feel that rhythm is a joy.

“But at the beginning, there was a week and a half when we were all utterly frustrated with the lines and with ourselves. We’ve all worked really hard together. Everybody has been so game, coming in early to run lines before performances — not just to learn the lines but to get the rhythm right.

“This play is really very funny in a dry kind of humor, but you have to hit the rhythm. It’s dark comedy. There are pauses written into the script where the laughter is built in. But we had one audience that was so quiet. We realized about 20 minutes in that they sensed the drama but not the jokes.” 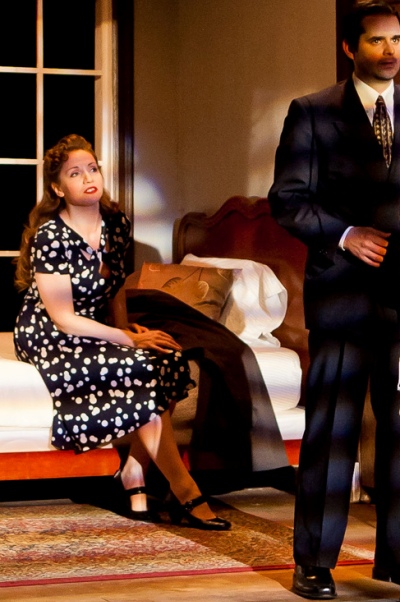 Turner admits that playing in that shadowy world is no laughing matter. Not the least problematic part of being on a half-lit stage, she says, is basic issue of getting from one spot to another without vanishing.

“Because you’re constantly moving in and out of light and shadow, your movements are very restricted,” she says. “You’re always crossing the stage sideways to keep your face in the light. And you can only move so far before you’re out of light. This is not physical theater. There are no grandiose movements to express yourself. Our lighting director (Cat Wilson) is a big noir fan, and it’s been exciting. But at first, just getting around on stage was almost as hard as the language.”

In the progression of challenges, says Turner, a Springfield native who studied theater at Columbia College, playing the torchy Anna posed two more hurdles beyond the physical constrictions and convoluted dialogue:

“We don’t want to reveal too much here, but it’s the range Anna must negotiate from seductress to an almost childlike simplicity. From an acting standpoint, that’s a key challenge.

“But my least favorite part is doing my hair every night. I’m a perfectionist. I want a certain look. It takes time. I have a day job.”