Report update:  Carnegie Hall’s concerts for Nov. 1 have been cancelled as the crane remains unsecured.  Broadway theaters have resumed their performance schedules, so it’s back to work for several Chicago-based performers.  Many off-Broadway theaters in the downtown area are still without electricity and remain closed. 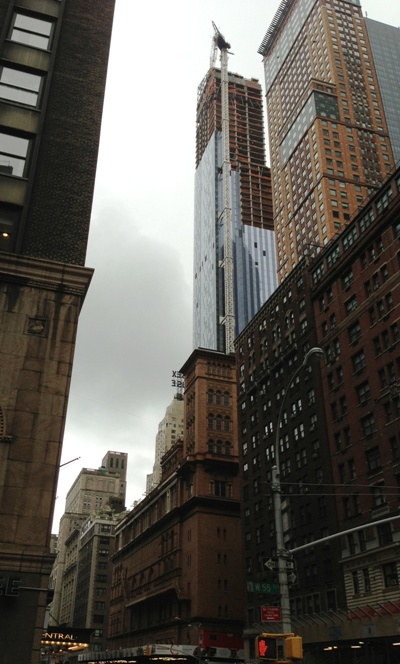 The crane’s collapsed five-story arm dangled down from 90 floors above 57th Street, looking a lot more menacing than it did in September when the Chicago Symphony Orchestra and Chorus performed there to open the venerable concert hall’s 2012-13 season.

Carnegie Hall’s schedule is now day-to-day. Concert plans through Oct.  31–  including a chamber music event with pianist Lang Lang and a visit by the Mariinksy Orchestra — are kaboshed. Violinist Midori, the Emerson String Quartet, pianist Murray Perahia and jazz singer Gilberto Gil all wait in the wings while officials figure out how to secure the crane or at least to prevent further damage if the arm does fall.

At a press conference shortly after the crane’s breakdown, Mayor Michael R. Bloomberg said buildings in the area would be cleared of people, traffic would be diverted and subterranean steam and gas pipes shut down as additional preventive measures.

Meanwhile, all of Broadway was dark, idling several Chicago-based actors, including Carrie Coon, who’s in the Steppenwolf production of the Edward Albee play “Who’s Afraid of Virginia Woolf?” now enjoying a 50th-anniversary run at the Booth Theatre on 45th Street. 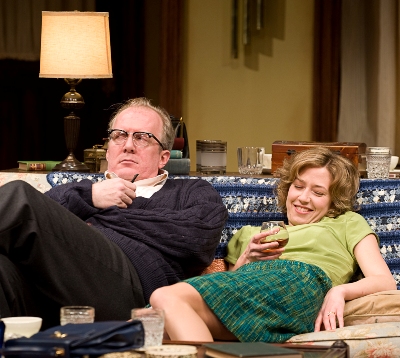 Coon plays the tipsy young Honey, wife of Nick. The young couple is ensnared by older George and Martha in a devastating battle of wits that lasts three and a half hours. But Coon says she actually felt a little uneasy about the enforced downtime that Hurricane Sandy imposed:

“Physically it’s good to have a break each week, for our voices and such, but for our timing it’s actually useful for us to stay in a regular rhythm. The show is like a football game — when you miss a moment you have to keep going, but when one of us gets off, it can be like dominoes.”

Coon says she got caught up in an hour-long checkout line at the market as the hurricane threat neared, but that otherwise “I was really shockingly unaffected. I was staying with a friend in the Upper West Side and we never lost power. When we checked in with the news, we saw terrible footage, which was sort of surreal, because where we were everything seemed quite calm.

“In fact, my mom called me from Ohio, and she said, ‘You little snot, you are in the middle of a hurricane, and we’re the ones who have lost power.’ ” 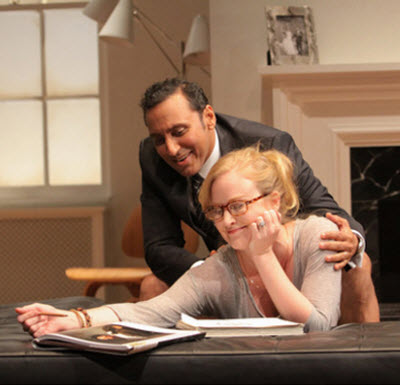 Meanwhile, the New York City remount of Ayad Akhtar’s “Disgraced,” which had its world premiere in Chicago last January, also got hung up by the storm. Chicago director Kimberly Senior shepherded both the Chicago production and a New York City remounting with a new cast (including The Daily Show’s Aasif Mandvi) to inaugurate Lincoln Center’s newest theater space — LCT3 — and she says all is well:  “I’ve talked to all but one (of the cast members). They are safe and sound. What a mess!”

Captions and credits: Home page and top:  Hurricane Sandy’s bizarre winds lifted the arm of a construction crane and flipped it backward over the base, so that the appendage dangled over 57th Street and swung in the wind Oct. 29. Descending:  The view from Seventh Avenue southwest of Carnegie Hall Oct. 30. Carnegie Hall is the ochre-colored brick building in the lower center, still endangered by the dangling crane. (Crane photos by Nancy Malitz) Stacy Letts and Carrie Coon share a boozy moment in “Who’s Afraid of Virginia Woolf?” — now playing on Broadway. (Photo by Michael Brosilow) “Disgraced,” with Aasif Mandvi and Heidi Armbruster, directed by Kimberly Senior, at LCT3 in New York City. (Photo by Erin Baiano)