Lyric to present first opera in mariachi style, tale of the Mexican experience in America

Report: The Lyric Opera of Chicago will present the Midwest premiere of the first mariachi opera, “To Cross the Face of the Moon,” about the Mexican-American experience, in April 2013.

Revisiting a notable success of his tenure at the Houston Grand Opera, Anthony Freud, general director of the Lyric Opera of Chicago,  announced Oct. 22 that the Lyric will present the world’s first mariachi opera in its Midwest premiere in April 2013 at the Civic Opera House, with subsequent Chicago area performances planned.

The Chicago premiere of “Cruzar la Cara de la Luna” (“To Cross the Face of the Moon”), set for April 7, 2013, follows widely heralded 2010 performances at the Houston Grand Opera and 2011 performances in Paris at the Théâtre du Châtelet. Spring 2012 performances are also planned at the San Diego Opera and again in Houston.

Instead of an orchestra in the pit, the musicians of Mariachi Vargas de Tecalitlán will share the stage and sometimes sing along, bringing their tradition’s jubilant, emotionally direct musical style to life with a 13-member combo of fiddles, trumpets, a special mariachi harp and the familiar guitar, along with the guitar’s somewhat less familiar mexicano siblings – the high register viheula and the deeply resonant guitarrón.

Here’s YouTube sneak peek of one of the duets:

The opera’s story line will follow the challenges of the Mexican-American Velásquez family, who are forced to confront questions of national and personal identity when their patriarch dies and a secret is revealed.

“Cruzar la Cara de la Luna” was composed by José “Pepe” Martínez, who joined the Mariachi Vargas de Tecalitlán as its music director in 1975. Martinez collaborated on his project with librettist and Broadway/opera director Leonard Foglia, a veteran of several new opera collaborations with the Houston Grand Opera.

Freud, who at 54 is now into his second season as general director of the Lyric Opera, was born in London of Hungarian immigrant parents and seems culturally omnivorous. He has described himself as a fan of mariachi specifically and Hispanic culture generally, with learning the Spanish language high on his bucket list.

Freud says he wanted opera-goers to experience authentic mariachi, not “a pastiche or ‘mariachi lite’ – I wanted it to be the real thing.”  Mariachi Vargas de Tecalitlán and the original multi-ethnic cast (a mixture of classically trained and mariachi singers) will all be making their Lyric debuts. 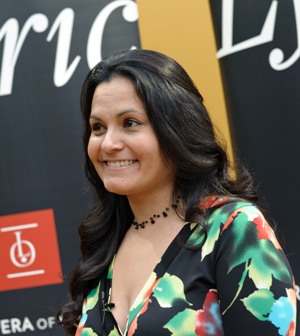 Freud made the announcement at the National Museum of Mexican Art in Chicago’s Pilsen neighborhood, surrounded by representatives of Chicago’s sizable Mexican and Latino community, which the last U.S. census reported as the country’s fifth largest. The performances will occur under the umbrella of Lyric Unlimited, an new outreach program aimed at people unfamiliar with the Lyric, or with opera as an art form.

Among those present were mezzo-soprano Cecilia Duarte, who will recap her leading role as Renata (the patriarch Laurentino’s first wife). A native of Chihuahua, Mexico, she now lives in Houston and has sung several roles for the Houston Grand Opera.

“Cruzar la Cara de la Luna” will be performed in Spanish and English, with projected translations in English and Spanish. After the initial performance at the Civic Opera House in April, performances will continue in various greater-Chicago locations with a different instrumental ensemble, the Mariachi Aztlán from the University of Texas Pan-American. Additional school- and community-based programs will be announced at a later date.