Sensational. That, in a word, was Russian pianist Nikolai Lugansky’s debut April 5 with the Chicago Symphony Orchestra and guest conductor Charles Dutoit. The tall, assured pianist – one could only think of the young Van Cliburn – made epic poetry of Rachmaninoff’s formidable Third Piano Concerto in a performance that probed a deep vein of lyricism and simply transcended technical issues.

Winner of the 1994 Tchaikovsky International Competition, Lugansky, who turns 40 this month, is a readily identifiable product of old-school Russian piano pedagogy. He brings equal portions of soul and virtuosity to his craft. His playing is majestic, sweeping, open-hearted, and as precise as it is powerful.

In the Rachmaninoff Third Concerto, Lugansky’s delivery of those shimmering trills, thunderous runs and orchestra-challenging chords seemed almost casual in its effortlessness. Not that a single phrase betrayed less than careful consideration of its weight and place in the grander scheme. This is a pianist whose intelligence matches up with his apparently limitless means.

All that said, it was Lugansky’s dreamy turn through the slow movement and his mercurial, finely contoured zip through the finale that really convinced me – after an opening movement that showed snatches of his best qualities offset by a tendency to chisel and bang in the big confrontational moments between piano and orchestra. Perhaps the pianist was unconsciously pressing; it’s impossible to know. But he showed no such clangorous inclination in Rachmaninoff’s brilliant finale, with its alternating flights of song and spectacle. That heart-stopping windup was preceded by an adagio of moonlit tenderness.

Dutoit, as well regarded as a conductor of Russian music as he is of French, was Lugansky’s ideal collaborator, drawing a performance of symphonic scope from the CSO and providing the pianist with room to flex his prodigious technical muscles. For its part, the orchestra imbued Rachmaninoff’s luxurious score – accompaniment would be far too passive a word – with all the warmth, heart and heroics required to maintain common ground with this superlative pianist. 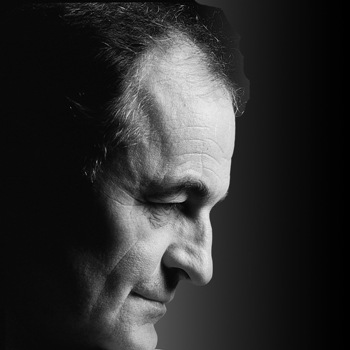 Complementing one grand Romantic opus with another, Dutoit opened his program with a vivacious and colorful go at Richard Strauss’ “Don Quixote,” featuring CSO principal cellist John Sharp as the knight of the doleful countenance and principal violist Charles Pikler as his nattering, long-suffering sidekick, Sancho Panza.

Sharp’s evocation of the determined, albeit delusional, Quixote matched pathos with lyrical intimacy. It was a performance marked less by flair than introspection, and its absolute highlight came in Sharp’s long, dreamlike solo suggestive of the old knight’s ideal vision of the beautiful Dulcinea.

Yet “Don Quixote” is not a double concerto, but rather a sonic canvas on which our dubious heroes are but players cast into a tumultuous and compelling world of the knight’s imagination. It is, in other words, a “symphonic” poem, specifically a series of variations that follow Quixote on his fatuous errands.

Dutoit and the CSO played it to the hilt, creating mad scenes of roaring tempest, cacophonic sheep and yearning visions worthy of that dauntless knight. It was like a good read, beautifully illustrated.