The Chicago Lyric Opera’s new season begins and ends with shows that should attract aficionados of opera and theater:  “Elektra” and “A Streetcar Named Desire.” Here’s the show-by-show breakdown.

Lyric Opera of Chicago’s 58th season includes nine operas between October 6 and April 6, 2013, plus the musical “Oklahoma” sometime in the spring. Like most large performing arts houses, the Lyric will push to sell subscriptions for the next several months. Single tickets won’t go on sale until August.

But the definition of a subscription has become so flexible nationwide that it’s worth reading the fine print. At the Lyric, small subscriptions are designed even for cultural travelers who want to choose pairs of back-to-back performances. Then there’s that other big incentive — the chance to lock in the really hot ticket and avoid scalper prices. 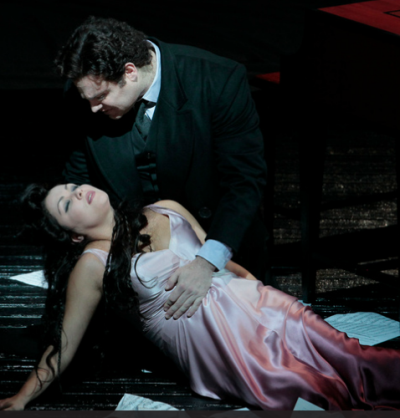 The season also includes six productions new to Chicago, including three Lyric commissions or co-commissions. All will have projected English translations.

Here’s the season at a glance:

1. “Elektra” by Richard Strauss and Hugo von Hofmannsthal, based on the Greek tragedy of Sophocles, opens the season with a new production by Scottish opera and theater director David  McVickar, with sets and costumes by John Macfarlane. The two have also collaborated on works for the Metropolitan Opera, the Rome Opera and the Scottish Opera. 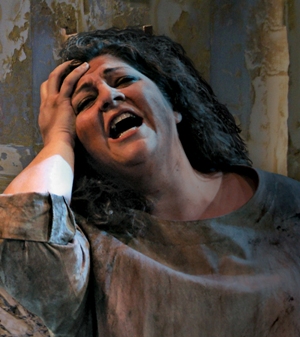 Lyric’s general director Anthony Freud says he recommends the one-act “Elektra” as a first-time experience for theater and film lovers because it delivers “maybe the most visceral punch of the entire operatic canon.”

American  soprano Christine Goerke will be making her Lyric debut as Elektra, the princess who is consumed by desire to avenge her father’s murder at the hands of her mother and her mother’s lover.

The story is centered upon the ferociously difficult role for dramatic soprano voice. Goerke, who’s been gradually taking on the heavier roles, scored a big success of it in a recent Madrid performance.  (Performances Oct. 6-30, led by Lyric’s music director Sir Andrew Davis.)

2. “Simon Boccanegra” by Giuseppe Verdi is a production by Elijah Moshinsky from London’s Royal Opera in Covent Garden. 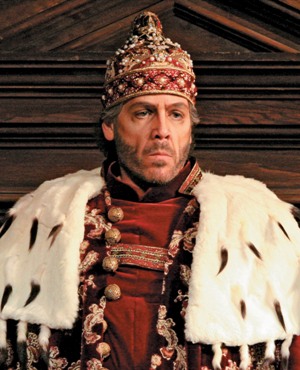 Starring as Doge of Genoa, a man torn between patriotic duty and love for his daughter, will be  Thomas Hampson. The American baritone was Verdi’s Scottish king Macbeth at the Lyric last season and he  takes that role to the Met beginning  March 15. He will also sing the betrayer Iago in Verdi’s “Otello” in Zurich.

Simon’s nemesis Fiesco will be the Italian bass Ferruccio Furlanetto, who was the Tsar Boris earlier this season at the Lyric.

Simon’s daughter is to be the Bulgarian soprano Krassimira Stoyanova, who sang in “Otello” with the Chicago Symphony Orchestra and Riccardo Muti in Chicago and at Carnegie Hall in April 2011. (Conducted by Davis, Oct. 15-Nov. 9.)

3. “Werther” by Jules Massenet, based on Goethe’s  loosely autobiographical novel of an extravagantly lovesick young poet,  is a Lyric co-production. 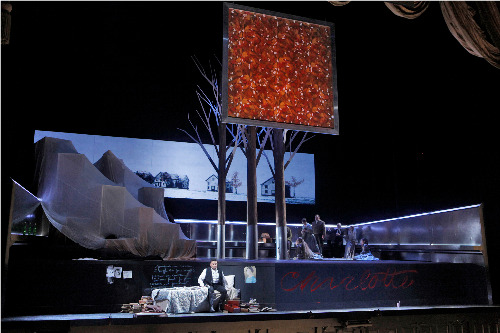 When the production was introduced to the world by the San Francisco Opera in 2010, it caused quite an internet stir for its modernistic bi-level steel set and some doppelgänger effects representing the breakdown of Werther’s body and spirit. It was the kind of show you loved, or loved to rant about.

The production is by stage director Francisco Negrin with sets and costumes by Louis Désiré. The show stars American tenor Matthew Polenzani, who was Lyric’s Faust earlier this season.  French mezzo-soprano Sophie Koch is his Charlotte. (Conducted by Davis, Nov. 11-26.)

4. “Don Pasquale”  by Gaetano Donizetti, comes new to Chicago from the Dallas Opera, which bought it from London’s Royal Opera in Covent Garden. The sets and costumes are by the late Jean-Pierre Ponnelle, and Sir Thomas Allen, the veteran baritone, will make his Lyric Opera debut as director.

The story is a comedic masterpiece and bel canto staple, about a foolish old man’s schemes to snare a beautiful young bride. He is of course thoroughly out-maneuvered by the feisty object of his affections and her various accomplices, but not without various sitcom reversals fraught with misunderstanding.

The role of Don Pasquale is often played by an older bass, but Lyric is presenting Ildebrando D’Arcangelo in his role debut.  The last time he sang at the Lyric he was the toreador Escamillo, in “Carmen.”

D’Arcangelo is singing Mozart in Vienna, Rossini at Milan’s La Scala and Donizetti in Genoa this season. Soprano Marliss Petersen is scheduled as Norina,  the crafty and resisting object of Pasquale’s affection. She was the star in Wozzeck’s “Lulu” at the Lyric in 2008. (Conducted by Stephen Lord, Nov. 25-Dec. 15.)

5. “Hansel and Gretel” by Engelbert Humperdinck, based on the story of the Brothers Grimm,  is envisioned as a droll holiday treat for the family, and Lyric will offer tickets starting at $20 for children accompanied by an adult. 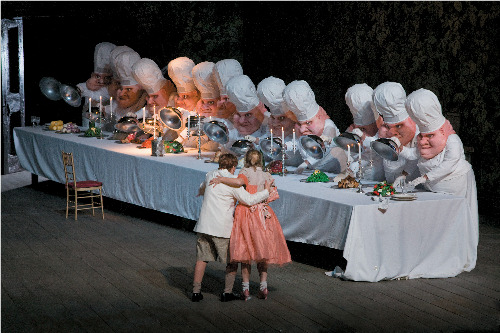 Filled with bizarre imagery and special effects, the Richard Jones production was jointly commissioned by the  Lyric Opera and the Welsh National Opera, which was run by Anthony Freud prior to his joining Lyric as general director. The production has also been seen at the Met, broadcast in HD and recorded for DVD.

In addition to  clever sets, if not a gingerbread house,  the show’s got a food fight and plenty of dessert fantasies, with the Witch behaving like a deranged  Julia Child whose super-huge oven awaits. (Conducted by Ward Stare, Dec. 7-19.)

6. “La bohème” by Giacomo Puccini, about a circle of Bohemian friends in mid-19th century Paris, will be presented in a venerable San Francisco Opera production in the traditional style,  new to Chicago audiences. 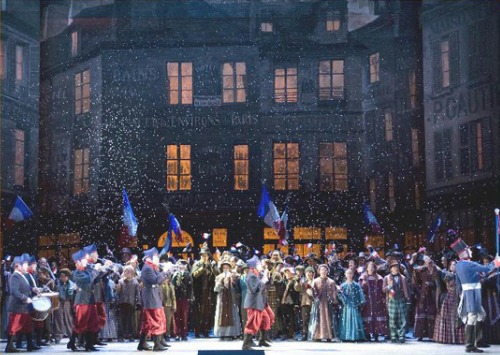 The 11 performances will be split between two casts, with Puerto Rican soprano Ana María Martínez as Mimi, paired with American tenor Dimitri Pittas as Rodolfo for the January and February performances.   Pittas sang Rodolfo this season at the Met. Martínez has a background in Zarzuela and she was championed early by Plácido Domingo, with whom she regularly tours in concert.  She has starred as Marguerite in “Faust” and Nedda in “I Pagliacci” in Lyric seasons past.

When Anna Netrebko takes over in March, she’ll be joined by Maltese tenor Joseph Calleja, who first sang at the Lyric as Alfredo in the 2007-08 production of “La traviata.” Netrebko and Calleja were to have performed Mimi and Rodolfo on a Met tour to Japan  in 2011, but they dropped out after the earthquake and radiation disasters. Freud has called his twin Rodolfos  “two of the most exciting tenors of the younger generation.” (Conducted by Emmanuel Villaume, Jan. 21-Mar. 28.)

7. “Die Meistersinger von Nürnberg” by Richard Wagner is a Lyric Opera co-commission with the San Francisco Opera and the Glyndebourne Festival Opera, which presented it first in 2011. 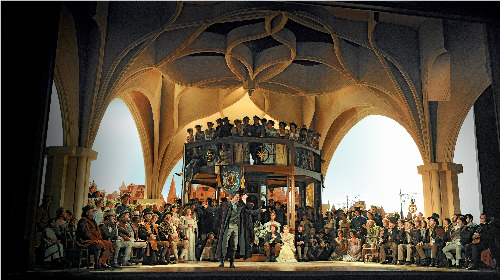 The David McVicar production, designed by Vicki Mortimer and staged by Marie Lambert, features a huge fan-vaulted set that serves as a cathedral ceiling and general purpose canopy for the great song contest at the center of the town’s life and the love story at its heart.

American Bass-baritone James Morris will sing one of his signature roles, the cobbler-philosopher and poet Hans Sachs, whose advice about life and art guides the young Walther (South African tenor Johan Botha) to win his prize. Morris has performed 11 different roles at the Lyric since his debut in 1979. (Conducted by Davis, Feb. 8-27, 2013.)

8. “Rigoletto” by Giuseppe Verdi is a Lyric production, first introduced in 2005-06.  It’s the story of a bitter court jester, the hunchback Rigoletto, whose own cruel jokes bring on a fatal curse.

Lyric will have two singers in the title role, both making company debuts: Polish-born Andrzej Dobber, who will take the first half of the run, has sung Rigoletto in Paris and other Verdi roles at the Met.

Serbian baritone  Željko Lučić, who will take over in mid-March,  has done Rigoletto in Dresden and at the Met, and he was Macbeth last summer at the Salzburg Festival with Muti conducting.

Freud calls them both “immensely distinguished interpreters.”  Rigoletto is the father of Gilda, who will be portrayed by Russian soprano Albina Shagimuratova, also in her Lyric debut. Shagimuratova is a high coloratura capable of Mozart’s Queen of the Night, which she has sung at the Bolshoi, the Met, the Salzburg Festival and La Scala. (Conducted by Evan Rogister in his Lyric debut, Feb. 25-Mar. 30.)

9. “A Streetcar Named Desire” by Andre Previn and Phillip Littell will star, in addition to soprano Renée Fleming, the New Zealand baritone Teddy Tahu Rhodes, as the explosive Stanley,  in his Lyric debut. 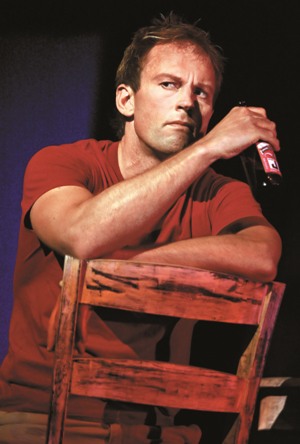 The plan, according to Freud, is to bring the orchestra onstage, with fully costumed actors who will perform among and around them: “The orchestra is one of the protagonists.”

That’s pretty much the way the opera was tried in 2003 at London’s Barbican Centre, directed by Brad Dalton, who will also do it at the Lyric.  (Conducted by Evan Rogister, March 26-April 6, following a March 14 performance at Carnegie Hall with the Orchestra of St. Luke’s.)

10. “Oklahoma!,” the Rodgers and Hammerstein musical, has been announced, but since it is to be offered as a special purchase, not part of any Lyric subscription package, there aren’t many details yet, except that it’s planned for sometime in the spring of 2013.

And keep in mind: Those who don’t want the season to go by without hearing some operatic standards sung by Fleming will have just one chance at the Lyric —  Jan. 24, 2013 — when she will perform in a duo-recital  with mezzo-soprano Susan Graham and pianist Bradley Moore.