Interview: As a sardonic buffoon, the actor casts an ominous shadow while a band of players tries to reverse the tragedy of the 1903  Iroquois Theatre fire. At Neo-Futurists, through Dec. 30.

His clown suit, a bit tattered and soiled with soot, looks like it once might have been pure white. But the character Dean Evans plays in the Neo-Futurists’ production of “Burning Bluebeard” is decidedly dark, one might even say spectral. And magnetic. 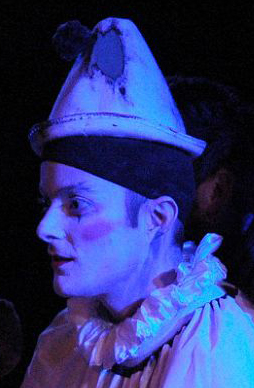 In this manic re-creation of the 1903 fire that destroyed Chicago’s Iroquois Theatre and took more than 600 lives, Evans’ Fancy Clown – as his nameless character came to be known within the company – is mesmerizing in its vaguely demonic postures and movements, and in the coolly detached voice Evans brings to his commentary on horrific events that no amount of replaying can alter.

“My character in the show sort of parallels the villain or bad guy,” says Evans, 34, a trained clown and artistic director of Chicago Physical Theatre.  “The show is about the fire. If that event doesn’t happen, there’s no reason for the audience to be there, so my character is pushing everything toward a recurrence of the tragedy.”

But all the other players – clowns, actually – express their desperate hope that their re-enactment of the show taking place on that fateful day, a light-weight musical treatment of the bloody Duke Bluebeard legend, can come out differently, without the inferno and chaos and massive loss of life.

In that hopeless circularity, “Burning Bluebeard,” by Neo-Futurists member Jay Torrence, brings to mind the existential mode of Beckett’s “Waiting for Godot” or indeed the grinding surrealism of the contemporary Irish playwright Enda Walsh. If the Iroquois tragedy comes under the heading of man’s fate, then it’s his condemnation to keep replaying that tape until a happier outcome is achieved: the classic definition of insanity.

“It’s almost like Beckett had written a fairy tale,” suggests Evans. The bleak humor is worthy of Fancy Clown. 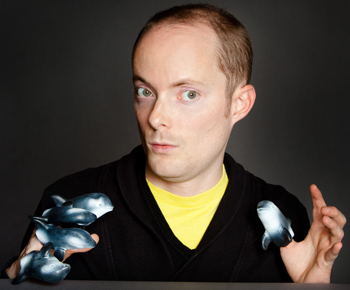 Evans, a Cincinnati native who studied theater at Ohio State University and clowning with several professionals, does free-lance clown work as a sardonic character called Honey Buns. It is in Honey Buns’ dark, crisp voice that Evans speaks as Fancy Clown in “Bluebeard.” So beguiling, even chilling is that voice that to hear Evans speaking casually in his own voice is to experience an unsettling disconnect. At one point during a month-long character development process, Torrence envisioned Evans simply bringing Honey Buns into “Burning Bluebeard.”

“But I had to separate this character from Honey Buns, which is very personal to me,” he says. “I couldn’t imagine Honey Buns speaking someone else’s words.” So just the voice was kept.

Early in the workshopping process, says Evans, playwright Torrence thought of “Burning Bluebeard” as purely a clown show, with very little dialogue and a great deal of interaction between players and audience.  In the end, Torrence entrusted his story to a small company of clowns who combine something like conventional dialogue with elaborate physicality.

“Clowns are eternally optimistic,” says Evans, “and even though every attempt to make ‘Bluebeard’ end well produces dismal failure, we start the next show thinking this may be the night. You could say it’s a story that only could be told by clowns.”

Critically dependent on verbal telling is the play’s finale, an extended and graphic account of the Iroquois fire delivered by an actor recalling the hideous sequence of events he witnessed. Ryan Walters delivers the speech, which Evans says still affects the whole company.

“Ryan and I are backstage together right after that speech, and it’s always a powerful moment for us both,” Evans says. “A tragedy of this scale is almost too much to contemplate. The first time through the script, at a table reading, everybody sort of lost it. This show is about people doing the same thing I’m doing. I think about them a lot. All of us have an almost spiritual connection with those people.”

In the actual fire, only one member of the acting company perished. But the hundreds of spectators who died included a great many children on Christmas vacation. Evans says when director Halena Kays brought in pictures of children who died that day as a reminder of exactly what they were re-enacting, “I had to back away. My character wants to see the fire repeated, and I just couldn’t get caught up in that reality.”

Where the Iroquois once stood now stands the Oriental Theatre. The broad alley behind the theater is ground that many actors will not tread. Evans understands that feeling. During rehearsals for “Burning Bluebeard,” he was offered a one-night gig as Honey Buns at an event at the Oriental. He considered the job rationally and accepted. Then, at the last minute, he was informed he would not be needed. What was the clown-actor’s response?