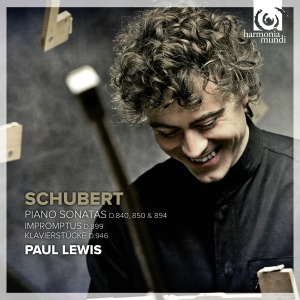 British pianist Paul Lewis brings a potent blend of ingredients to a diverse collection that shows Schubert as both Beethoven’s heir and an original, indeed daring creative spirit. The union of intellect and imagination that marks Lewis’ playing throughout is nowhere more riveting than in his boldly evolving account of the “Fantaisie” Sonata, D. 894. The opening movement, with its irregular rhythms and quilt-work thematic development, is almost worth the price of the two-CD set. This is mature Schubert redefining the sonata as a rumination with mere touch-points of tonality and thematic reference as structural guideposts. Lewis’ deeply internalized playing puts one in mind of Hamlet musing on what dreams may come in one’s last sleep, in that undiscovered country whose border Schubert crossed at a tragically early age.

The Sonata in D, D. 850, perhaps lies closer to Beethoven’s model in its plan and power (though Schumann disapproved of its light-hearted, “simplistic” finale).  Here, too, Lewis proves himself the patient, evocative, inviting story-teller. The “Reliquie” Sonata, a two-movement fragment, is one of the many works Schubert put aside never to complete; like the “Unfinished” Symphony, this bracing, lyrical essay leaves one wishing for the pages never penned. Lewis rounds off his recital with bravura turns through two series of Schubert’s fantastic flights, the Impromptus, D. 899, and the Piano Pieces, D. 946. Happily, one can hit Play again, for there’s no way to absorb such riches at a single hearing. – Lawrence B. Johnson