Preview: The Metropolitan Opera’s Live in HD broadcasts in local cinemas throughout the U.S. feature a landmark of American minimalism not to miss —  “Satyagraha” by Philip Glass, Nov. 19 and Dec. 7.  Here’s a peek.

At about this point in the Metropolitan Opera’s annual Live in HD season at cinemas around the world, it is possible to become complacent. These broadcasts offer an embarrassment of riches at affordable prices, and the Met has gotten very good at providing sumptuous sound and visual splendor for opera lovers who also love their popcorn.

But the Saturday afternoon offering on Nov. 19 —  broadcast live from a matinee performance at the Metropolitan Opera in New York City,  with a single re-broadcast on Dec. 7 — is not business as usual, not even for the Met. 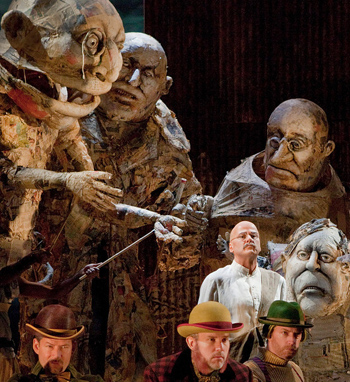 “Satyagraha” is a profound work of modern American opera, written in 1979 by Philip Glass at the height of his minimalism period, the very stuff that turned him into a living legend. ( Glass turns 75 in January.) It’s a spectacularly visual, non-traditional work of theater whose appeal should reach well beyond lovers of Mozart, Donizetti, Verdi and Wagner.

The broadcast’s timing is almost freaky, considering the Occupy Wall Street events of recent weeks and the political unheavals in the Middle East.  “Satyagraha” is a meditation on Mahatma Gandhi’s struggles in the first half of the 2oth century to achieve social change through non-violence, and similar travails by his soulmates Leo Tolstoy (who came before)  and Dr. Martin Luther King Jr. (who came after).

The text of the opera is in Sanskrit, drawn from Hindu scripture known as the Bhagavad Gītā, a discussion of mythical dimension about the spiritual and moral dilemmas surrounding oppression, righteousness, violence and battle.

Gandhi considered the Bhagavad Gītā a touchstone, and the setting for the opera is Gandhi’s early period in the British Colony of Natal, South Africa. Gandhi formulated his philosophy of non-violence while observing the misery of 150,000 Indians who had been taken across the Indian Ocean, as indentured servants, to work the South African sugar cane plantations.

As for the meaning of the word “satyagraha,” often translated as “truth-force,” Ghandi’s grandson, Arun Gandhi, explains it here:

“Satyagraha”  is the second in Glass’ trilogy about men who he believes changed the world — Einstein through science, Gandhi through politics and the Egyptian king Akhnaten through religion. As Glass tells it, the idea for the second installment arose from his own experiences in India, where he first learned of Gandhi’s historic  241-mile Salt March against British taxation:

In recent years, Glass has spoken of these peaceful social revolutions as failures because they never achieved the ultimate ideological goals of their leaders.  Indeed, the world indeed may be in worse shape than when Glass wrote the opera, at least as it pertains to the persistence and extent of human violence. But “Satyagraha” is a beautiful work, meditative and inspiring, a testament to the transcendent vision of Ghandi and his spiritual counterparts.

The Met’s fanciful production — by director Phelim McDermott and designer Julian Crouch with the  Improbable Theater Company of London — has pageant-like aspects and unforgettable scenes using aerialists and found-object sculptures. At one point enormous puppet heads, fashioned out of newspaper,  tower over Gandhi and his followers — part of a growing trend toward creative use of outsize puppetry that includes Julie Taymor’s concept for “The Magic Flute,” Achim Freyer’s “Ring” Cycle, Basil Twist’s “Hansel and Gretel” and Handspring Puppet Company’s  “War Horse.”

This “Satyagraha” was originally created for the English National Opera in 2007 and first mounted at the Met in 2008. Much of the original cast has returned for the current run, including tenor Richard Croft as Gandhi.  By now it’s a smooth operation, and a DVD is surely in the works.  Meanwhile, the silver screen awaits. 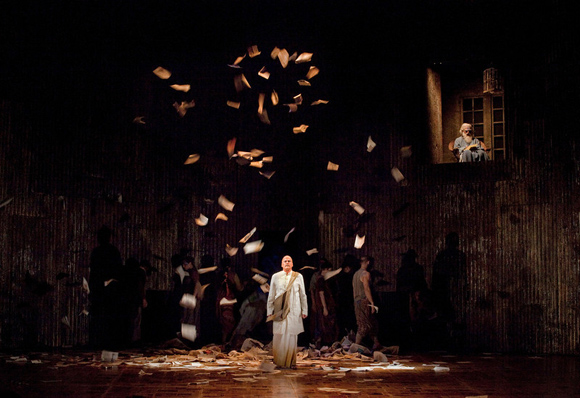