Sony Classics’ compendium of 109 symphonies, at a super-bargain price, will boggle the sensibilities of music lovers on your shopping list.

In a quandary about what to give the person you dare not buy for? If that knotty assignment is a musiclover, we at Chicago On the Aisle have a happy solution: 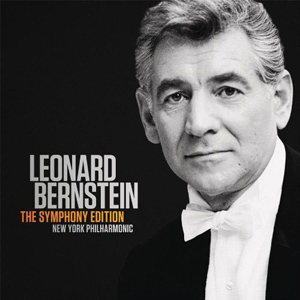 How about a CD box chock-full of symphonies — actually, 109 of them? “Leonard Bernstein: The Symphony Edition” (Sony Classics) is a stunning 60-disc compendium of the symphony from its genesis with Haydn to masters of the 20th century.

Thanks in part to the arrival of stereo recording at the very moment Bernstein assumed the directorship of the New York Philharmonic, in 1958, the prodigious discography he built over the next three decades helped to bring the symphony to an ever wider American public. Indeed, Bernstein’s recordings, ranging across music history from Haydn and Beethoven to Mahler and Shostakovich, helped to define the modern sense of what a symphony is or ever has been.

And the symphony, beheld through the lens of this singularly influential conductor, is the exhilarating subject of Sony’s Bernstein Edition. Its release, late last year, commemorated the 20th anniversary of Bernstein’s death in 1990 at age 72.

The prodigious collection was recorded almost entirely with the New York Philharmonic, where Bernstein remained as music director until 1969 and retained the title of laureate conductor until his death. Hardly less startling than the contents is the modest price. You can find it online at prices ranging from $110-160, which means as little as $1 per symphony and less than $3 a disc in any case.

This treasury includes several complete sets: all nine Beethoven symphonies, the four Schumann, the four Brahms, the nine Mahler, the six Tchaikovsky, the seven Sibelius. And along with 19 Haydn symphonies, the array extends to goodly representations of Mozart, Schubert, Nielsen and Shostakovich as well as Bernstein’s three symphonies and other 20th century works by the likes of Charles Ives, Ralph Vaughan Williams, Roy Harris, David Diamond and William Schuman.

There’s a distinct risk here of not being able to see the trees for the forest, of effacing the individuality of each of these marvelous documents in contemplating the sheer wealth of it all. But this bounty was created one recording at a time, and each performance bears a uniquely arresting character, though all are sprung from Bernstein’s musical DNA.

And what is that? Perhaps it begins with an American sense of liberated, animating rhythm. Just listen to the buoyancy that infects the opening movements of Mozart’s Symphony No. 41 (“Jupiter”) and Beethoven’s Symphony No. 3 (“Eroica”).  (Click and scroll down for audio clips.) Or turn back to Haydn, with whom Bernstein clearly felt as close a bond, composer to composer, as he did with Mahler. A good deal of Haydn’s ever-present wit lies in rhythmic sport, and Bernstein was only too happy to accommodate him: Catch the whizzing finale to Symphony No. 86.

Bernstein also was a genuine romantic who heard the symphony’s evolution as an ever rising tide of personal revelation. Across the arc drawn by his baton, it’s a short path from the rumination of Schubert’s “Unfinished” Symphony to the lyrical surge of the Schumann Second and Brahms’ Fourth. Yet Bernstein never generalized. Within his long, arching phrases, voices are balanced, clear and expressive. To take a modern instance, the slow movement of Shostakovich’s Fifth Symphony – a recording unsurpassed in the last half-century – unfolds with a delicacy and wistfulness that veers toward tragedy without ever tumbling into maudlin excess.

If Bernstein had a special province, it was Mahler, whom the conductor regarded as the last authentic voice in the Austro-German symphony tradition handed down from Haydn. I’ve lived with Bernstein’s Mahler recordings for more than 40 years and it’s still illuminating to revisit with him these grand, complex and bizarre symphonies. From the folkie spirit of the First Symphony’s second movement, to the severe brilliance of the Fifth Symphony and dark yearning of the Ninth, Bernstein found a consummation never dreamt of by Haydn and yet inevitably destined from that very seed.

Sony’s LP-size box includes a somewhat forced essay on the evolution of the symphony as Bernstein perhaps saw it, but provides no notes on the music. All told, this remarkable compendium can lay reasonable claim to the classical music bargain of the last 50 years.