Closer Look: Soprano Anna Christy has the audiences at Lyric Opera of Chicago collapsing in laughter as a doll in motion in “The Tales of Hoffmann.” But the secret of her transport is cloaked in crinoline.

We had to know. How is it that soprano Anna Christy is able to zip around like a hovercraft while pinging those sparkling high notes as Olympia, the mechanical doll, at the Lyric Opera of Chicago?

Christy’s careening high jinks, not to forget her clever vocal wheelies, steal the first-act show in Jacques Offenbach’s “Les contes d’Hoffmann” (The Tales of Hoffmann) now playing at the Lyric through Oct. 29.

By the time we caught up with Christy backstage at a recent intermission, her giant pompadour wig had been whisked off, her porcelain doll make-up wiped away, her inch-long eyelashes dropped back in the tray and her enormous ruffled skirt safely hung. The gentle strains of Act 2 were drifting through the intercom and she was done singing for the day.

The secret is a remote controlled tricycle, operated by stagehand Tom Hall, who is discreetly camouflaged as a member of the onlooking chorus. “He hides his steering device behind his back, and he ducks behind tall singers and sort of peeks around heads to make sure I don’t fall over,” she says.

“Every night it’s a little different, you know, depending on how much juice the battery pack has, or how (Hall) happens to be feeling that day. He’s the most wonderful man, and his number one concern is to make sure I’m safe, and I know that, so I trust him. And I’ve got a little foot brake, just in case.”

Christy’s crinoline bustle and underskirt are made of steel instead of old-fashioned whalebone or cane, and attached to the tricycle. Top half meets her bottom half when Christy walks out of her dressing room shortly before her entrance on stage.

“I step onto it and get strapped in, with apologies to (the tenor Matthew Polenzani) because he’s just sitting right there and I have get under my dress to get this seatbelt thing on. The first time he saw me do that I think he was startled, but I was like, ‘Sorry! there’s nothing more exciting here than my knee highs!’ ”

The costume goes on in layers. First, the petticoat slips around the cage. “And then my dresser comes up-and-over with the gown part of it, and she hooks me together. The skirt is kind of stationary, so if I want to move forward it pulls me back because it’s essentially stuck,” Christy explains, while making a choking motion with her hand on the bodice. “So before I go on, I hike the whole thing forward to give me room to maneuver.” It’s rather like pulling up on a pair of tight jeans before sitting down.

The stage scooter seemed fast at first, but Christy says she quickly got used to it although there is no track on the floor and the controller must improvise. “I think the fact that it’s a little different every night is actually interesting and that helps me. Even if my arms are going this way, the rest of me could be going that way — or in a different direction — I never know.” 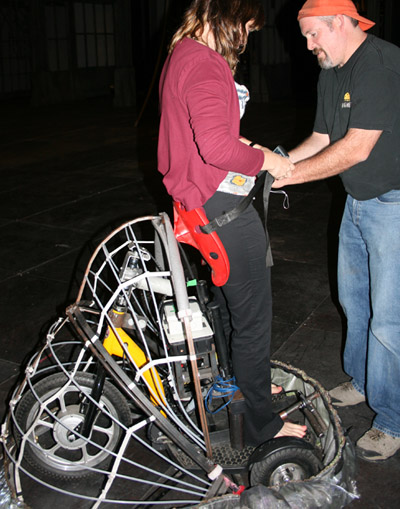 The tricycle seat was tricky, though. “The first day I thought, ‘No way. I’m basically sitting back to sing this aria and that’s hard.’ Now I sort of perch at an angle and throw the center of my gravity forward, so that I can control more of my physicality, which helps with my vocal support, helps my blood get moving, gets my voice going.

“Every other time I have done this role, I was the one doing the moving, so I needed to preserve some of that. The first time (at Central City Opera in Colorado) I was doing pirouettes all over the place, which I loved. And someone would come over and hook one of my arms and one of my legs and dangle me on my side, and that’s fun, because you really feel like a doll.

“Then last year (at the Metropolitan Opera) it was more of a ballet thing. I had a little pink tutu and pink toe shoes and a little crown on my head, and I twirled around and did pliés to the music.

“So this time it’s quite different but it also makes sense, because she’s a mechanized doll — so what else would she be riding around on than a mechanized cycle?”

Stage director Stéphane Roche gave Christy freedom over all the parts of her body that weren’t fastened down. “He basically told me, ‘OK, you’re standing on that, and it’s going to move around, and you’re going to sing your aria and, you know, maybe you should blow a kiss to the maestro here, wave at the audience there, and everything else just… ‘ He paused and so I asked, ‘You want me to just fill it in?’ And he said, ‘Yep,’ and I said, ‘I can do that!’ ”

The result is a riotously revved up Olympia, a machine that goes berserk. She’s virtuosic and side-splittingly funny at the same time. If you want to catch it, there are several more chances through Oct. 29. 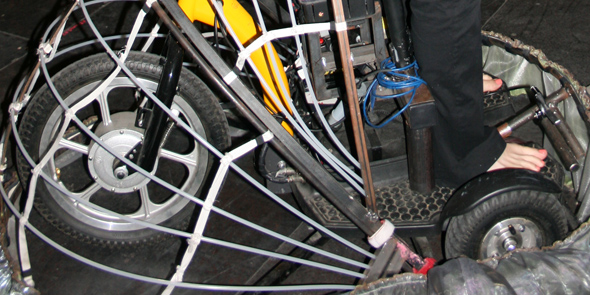