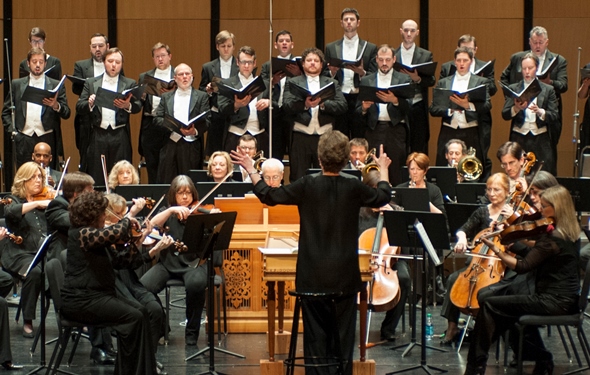 Review: Music of the Baroque conducted by Jane Glover, works by Mozart and Beethoven at the Harris Theater for Music and Dance.

When Music of the Baroque decided to present a program that featured vocal masterworks by Mozart and Beethoven, it did not cut any corners on the main soloists. Indeed, it engaged two of today’s reigning sopranos – Kathryn Lewek, who is performing the Queen of the Night in Lyric Opera of Chicago’s new production of “The Magic Flute,” and Susanna Phillips, who recently starred in the Metropolitan Opera’s premiere of Kaija Saariaho’s much-acclaimed “L’Amour de loin.”

Lewek and Phillips delivered the goods for Music of the Baroque in a pair of concerts that concluded in exhilarating fashion Jan. 23 at the Harris Theater for Music and Dance. 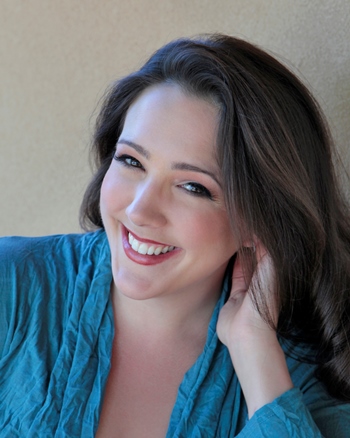 This was not a case of dueling divas, although it did seem clear that neither was going to allow the other to outshine her in the program’s centerpiece – Mozart’s Mass in C minor, K. 427, which at its premiere featured the composer’s wife, Constanze, as lead soloist.

It is hard to disagree with conductor Jane Glover’s observation in the program book that this “astonishing work is quite unlike any other church music of its time.” The Mass in C minor contains amazing vocal solos, involved fugal writing that looks back to Bach and Handel, unusually large and varied orchestral forces and generous solos for some of those instruments. Mozart left the Mass unfinished, and Glover chose to use the H.C. Robbins Landon edition, which fills in missing orchestrations and choral parts but does attempt to reconstruct the work in its entirety.

Phillips and Lewek proved to be ideal complementary voices, both showing ample power, dazzling agility and subtle phrasing. The former’s sound displayed a bit more airiness, and the latter’s more of a gleaming edge with a strong, penetrating upper register. 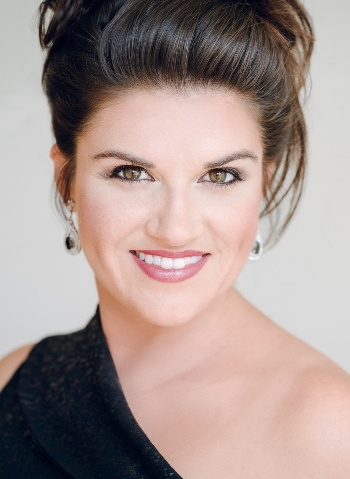 Lewek made sure the famous aria-like solo, “Et incarnatus est,” accompanied by flute, oboe and bassoon, was the transcendent peak it should be. She combined pinpoint high notes and flawless coloratura technique with soft, graceful crescendos and beautifully flowing lines. She was also strong in “Christe eleison,” in which she showed that she could handle low notes as well the high, artfully descending to the A below middle C.

Tenor Charles Blandy and baritone Kevin Keys, the two male soloists who stepped out of the chorus for their moments in the spotlight, solidly held their own alongside their famous colleagues.

Credit also is due the Music of the Baroque Orchestra, which proved to be a worthy counterpart to the soloists and chorus and gave eloquent voice to Mozart’s evocative instrumental writing. 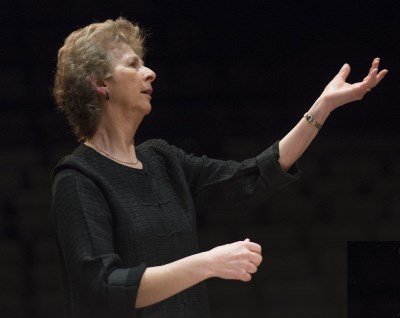 As these performances made clear again, Jane Glover, Music of the Baroque’s music director since 2002, is a through-and-through Mozartian. The British conductor, author of the much-praised book “Mozart’s Women,” has led his music countless times. Here she captured the buoyancy and lightness of the Mass while also conveying its power and majesty, never letting the tempos or energy flag. And perhaps best of all, like the frequent operatic conductor that she is, Glover channeled Mozart’s well-known operatic sensibility in this work and was intimately responsive to every soar and sigh of the soloists.

The evening concluded with Mozart’s “Ave Verum Corpus,” a short, tender choral work. An argument could be made that it was superfluous, a needless addendum following such a substantial, all-encompassing piece. But on other hand, it could be seen as kind of restorative coda or encore – a nice bookend to a satisfying concert.

For her program opener, Glover turned to a composer who was a Mozart fan as well – Beethoven. To the “Coriolan” Overture, part of Beethoven’s incidental music for a little-remembered play, Glover and the orchestra brought crisp articulation and well-defined dynamic contrasts, conveying the work’s suspenseful drama and whetting the appetite to hear more of this music. With just the tiniest of pauses, Glover moved directly into the Prisoners’ Chorus from Beethoven’s opera “Fidelio,” an unexpected segue that proved quite effective. Fifteen male members of the chorus, with solo help again from Blandy and Keys, nicely animated this famed excerpt.

Then it was back to Mozart – his celebrated motet “Exsultate, jubilate.” This time Phillips had the spotlight all to herself, and she could not have been more comfortable or more in control, turning in a complete and moving performance. Every technical detail was in place, from flawless intonation to nimble ornamentation. There was strength about her singing, and emphatic urgency when needed, but she never overpowered the music. Instead, there was more a sense of embracing it, with a fetching floating line and nuanced phrasing that always took on a slightly different cast each time a passage was repeated. This was about expressiveness, not mere vocal display.