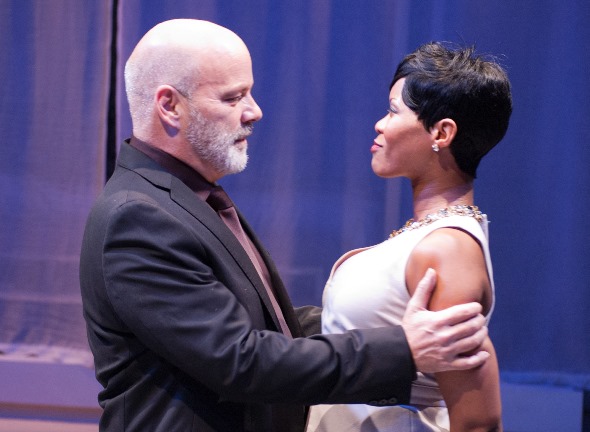 Interview: As Henry VIII’s sixth queen, in “The Last Wife” at TimeLine, White mastered the arts of resilience and standing erect.

“How am I going to survive this?”

When you’re playing the sixth wife of the notorious spouse-disposing English King Henry VIII, says AnJi White, that first willful statement tends to be followed hotly by the “how-ine-the-world” question. 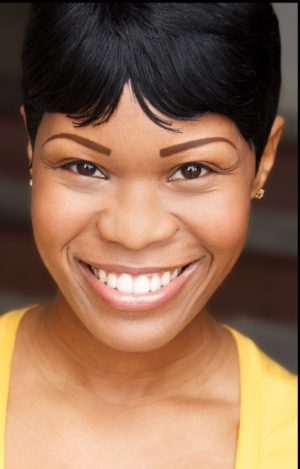 In a grand and yet vulnerable portrayal of Catherine Parr, in Kate Hennig’s “The Last Wife” at TimeLine Theatre, White pursues a nightly answer to the riddle of survival. Parr keeps trying to spread her wings as queen only to keep getting them clipped by a dangerous man who holds her life in his palm, and who will brook neither challenge nor collaboration.

Whether Parr addresses her man as husband, Highness, Henry or Hal, he remains first of all her King (played by Steve Pickering). He is the solitary embodiment of all power, and he guards it jealously.

“It’s a love story,” says White, “but Parr comes into the marriage – she has no choice about accepting Henry, of course – knowing his history, and that’s terrifying. He can have her head on a whim at any time. So she’s negotiating from the start. She’s very well educated and believes women are capable of freedom and power as well as men.

“We didn’t want to play her too young. I’m not some demure girl. She’s been married twice before, and Kate (the playwright) put into the story that she was raped at some time in the past, which complicates her attitude toward sex. Henry wants her to educate his son Eddie (the future child King Edward VI), but Parr also grows very fond of his daughters Mary and Bess. To survive, she needs Henry’s trust, but also that of the children.”

Hennig’s highly charged narrative, at once historical and modernist, finds Parr constantly pressing her advantage, trying to gain wider creative opportunity for herself even as she also tests the patience of a king with a short fuse. White says director Nick Bowling helped her to stay upright on a tightrope of emotional intensity without tumbling into emotional excess. 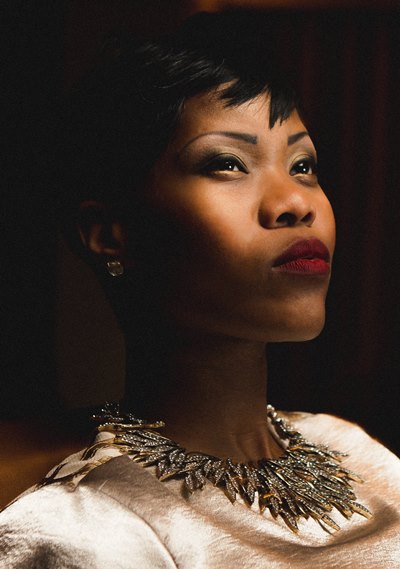 “He wanted me to be very careful about showing too much of what I was feeling,” she says. “Henry and I argue a lot, and Nick kept reminding me not to over-speak. That went as well for Parr’s interest in Tom.”

Aha! Here’s where the plot really thickens for Parr, and indeed where we enter the playwright’s story. At the outset of the play, Parr’s current husband is dying. She’s attending an event at the palace, perhaps a cocktail party. She and a keenly interested young man, who turns out to be the courtier Thomas Seymour (Nate Santana), have escaped the crowd and, drinks in hand, slip into a quiet room. We don’t know either one of them. That entry out of left field, says White, posed a challenge bordering on mystery to her.

“In the beginning, I was like, where are we, why are we here?” she recalls. “We’re in the middle of a conversation. How was that going to be clear? It was a leap of faith. We just went with it. But that scene also helps to give the play its modern frame. She’s still married and she keeps Tom at a distance. Henry hasn’t yet asked her to marry him. So a lot of tension is set up in that first rather unclear moment.”

The tension is almost unremitting throughout “The Last Wife” and it almost always centers on Parr, who’s rarely off stage. White says the King’s volatile nature poses a minefield of risks for this woman who is perpetually negotiating on behalf of herself and Henry’s two alienated daughters – Mary, who is nearly Parr’s age, and the much younger Bess, who eventually will become Queen Elizabeth I. 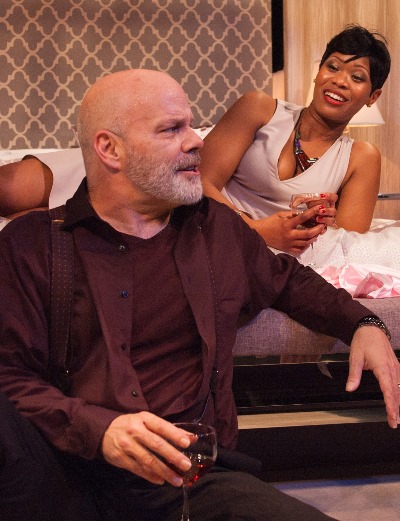 “Parr sees that Henry can be a caring and generous man,” says White, “but then he slaps her for disrespecting Jane Seymour. (Henry’s third wife, Jane died after giving birth to Edward, his only son and heir to the throne. Henry chose to be buried beside her.) “We didn’t want to overplay the domestic violence, but it’s real. This is another aspect of the play where history intersects the modern perspective.”

Happily, says the actress, the unassailable and unpredictable strongman you see on stage is a much nicer guy off stage: “Steve is great, a very sweet man who loves to tell stories and laugh. But he’s also very convincing as a dominating man of power, and I have to match up with that and not simply be terrified all the time.

“Nick pointed out that Henry is like a child. So how does a woman deal with a man-child? You don’t yell at him. The audience doesn’t want to listen to that – and besides he’s the King of England.”

The answer lies in a modern psychological overlay that’s rooted in the playwright’s language. 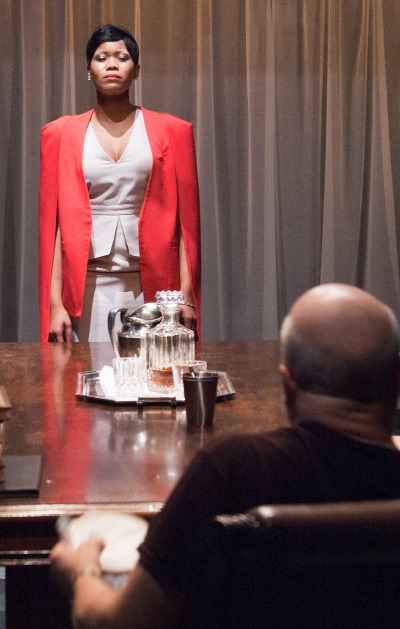 “When I read the play, my reaction was, oh, this is contemporary. She intended for it to be a universal story. Here’s this woman with an overpowering husband, a mother who is trying to be free, who wants to have a career and be a mom – with children (though they are Henry’s, not hers) who just want to be loved.”

Modern, too, is the dress. That means as White observes with a laugh, no buttoned-up frocks or anything similar to merry widows corsets that can keep her posture erect at every moment. And yet one of the most striking features of her performance is her invariably statuesque posture.

“Someone asked me about being in a corset the whole time,” says the actress, who more than once offers visual proof that no such props are holding her up. “Corsets make you carry yourself in a certain way, so I had to make my own physical adjustment. It’s hard to maintain that backbone through the play. And then the moment she gets slapped…” White leaves the thought unfinished, but it ends like this: Suddenly the proud woman is reduced to a cowering, trembling heap on the floor.