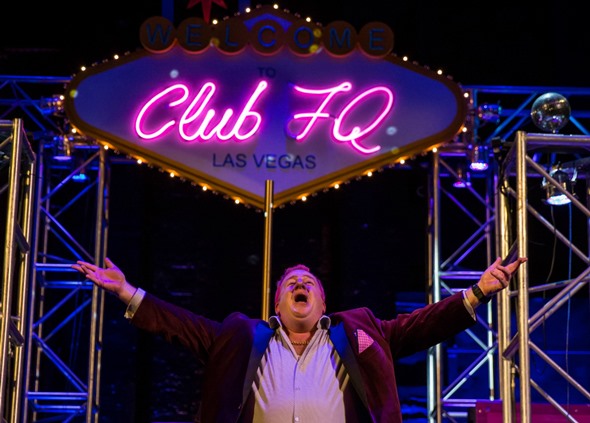 Review: Purcell’s “The Fairy Queen” at Chicago Opera Theater, in the Studebaker Theater, through Nov. 13. ★★★

Who is that with the pink head, leathery strawberry feet and an oversized gut, whimpering and bellowing and moaning?

The show opened Nov. 5 at the newly reopend Studebaker Theater in the Loop’s Fine Arts Building. 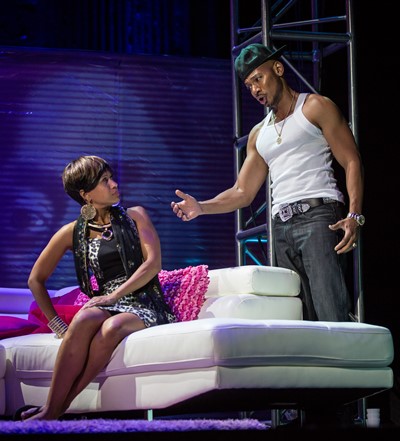 This is not your typical Shakespeare, though Purcell’s adaptation of “A Midsummer Night’s Dream” was already weird enough even at its premiere. (Stage directions call for two swans to swim under the arches of a dragon bridge, transform into fairies, and dance with six monkeys.)

COT’s production is a contemporary reworking of the libretto by artistic director Andreas Mitisek and the performance troupe Culture Clash, consisting of Richard Montoya, Ric Salinas, and Herbert Siguenza. The fairy monarchs Titania and Oberon have become Tanya and Ron, a couple plagued by Ron’s wandering gaze, staying at Puck’s club to celebrate Ron’s birthday. Lysander and Herman are a just-married gay couple, Demetrius and Helena are attempting to get past the distractions of work and cell-phones to right their foundering relationship, and Shakes the drunken poet presides over it all, spouting verse whenever he rouses from his stupor. 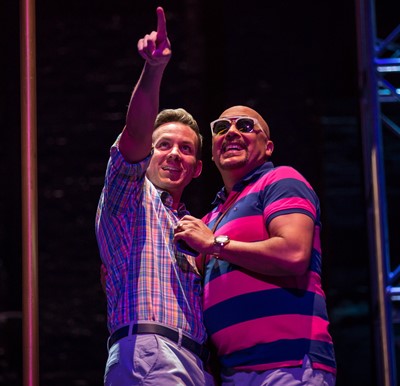 When Puck attempts to solve Ron and Tanya’s problems by giving Tanya a drink drugged with “Mextasy,” which makes the imbiber fall in love with the first person they set eyes upon, everyone else partakes as well, leading to some unexpected coupling.

Such license is perfectly reasonable, given that the status of Purcell’s “semi-opera” is as confused as the sexual misadventures of the couples. The original work consists of spoken text taken mostly intact from Shakespeare, supplemented by musical masques with generic lyrics about love and the seasons that do not relate directly to the plot. So arias can be easily assigned to any character and imbued with an entirely new meaning depending on the context – as when “trip upon the green” is transformed from a pastoral ditty to a party song about marijuana. Mitisek and Culture Clash have written their own text around these songs, mixing up the genders of Shakespeare’s characters, promoting the sexual undertones, and updating the speech into contemporary dialect. 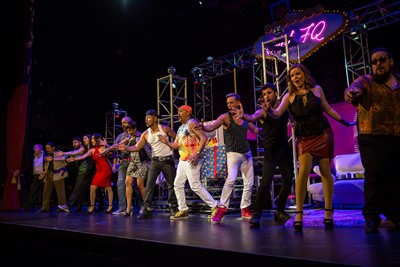 All of this causes the middle third of the adaptation, when the characters explore new sexual proclivities under the influence of the “Mextasy,” to be absurd fun. But the rest of the production isn’t quite crazy enough for the excessive, libidinous conceit to succeed.

While Kimberly E. Jones as Tanya and Darryl Taylor as Herman are outrageous and entertaining as voracious sexual predators, much of the rest of the coupling feels awkward. Stagnant staging can be blamed in part – the singers were often given only two or three strained actions to perform during lengthy songs with not much text. Questionable situations also didn’t help, especially an inadvisable sex gag involving Shakes and Puck and a chair that didn’t make sense in the context and went on for way too long.

The tidy wrapping-up of the chaos at the end of the adaptation is also unfortunate. After all the humorous transgressions, for some reason Mitisek and Culture Clash decided to resolve everything and offer some corny platitudes that feel out of place and pointless – worst of all Ron’s line about his birthday being the ideal occasion to celebrate the rebirth of his and Tanya’s love.

Purcell’s music sometimes hinders the production as well. Difficult to sing, with its rapid runs and strange intervals, it’s also not always the most exciting. Lively dances were not quite as fleet as they could be in the singers’ performances, though the period-instrument Haymarket Opera Orchestra, led by harpsichordist Jory Vinikour was delightful. Laments were more successful, imbued with otherworldly sorrow by the amazingly expressive recorder and oboe of Kathryn Montoya and Sung Lee. 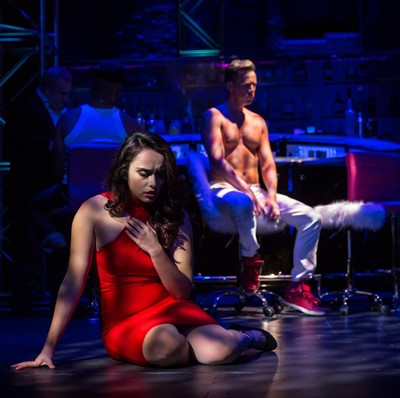 The singers did ham up their performances, enlivening some of the music and fitting it into the overall insanity of the production. Malomot’s sharp diction and aggressive passagework focused the text. Cedric Berry (Ron) displayed a satisfying and powerful bass, while Jones settled into a confident upper range as the opera progressed. Taylor’s beautiful falsetto matched the countertenor of Herman’s lover Lysander, Ryan Belongie. One masque near the end was in an awkward range that required both of them to continually switch between falsetto and chest, dulling the effect of their accomplished voices. Alexandra Martinez, as Helena, excelled in Purcell’s virtuosic lines, lending grace to nearly unsingable flights. Roberto Gomez was an amusing and exorbitant Shakes and Scott Brunscheen had a supple tenor as Demetrius. 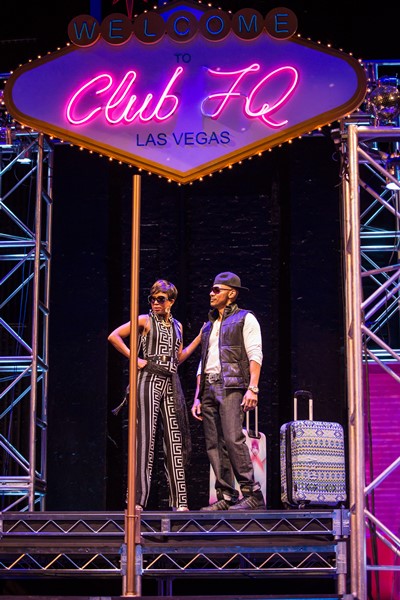 The set and costumes, designed by Mitisek, in addition to Dan Weingarten’s colorful lighting, lent a suitably gaudy aspect to the sordid “Club FQ.” Disco balls, light-up shot glasses, a stripper pole and some fantastic shiny gold sneakers with flashing soles fit right in with Puck’s pink hair, though the large portraits of Shakespeare and Purcell behind a white leather couch were a strange touch.

The production at times tried a bit too hard to be contemporary: a drone delivers a package, Demetrius and Helena met via the Tinder app, a worker at the club films an argument between Ron and Tanya on her cell phone. But Mitisek and COT must be lauded for a production that is contemporary, ridiculous and fun – adjectives too infrequently applicable to opera.