Music of Baroque ‘Messiah’: Surprise stardom for the band, with mezzo-soprano as superstar 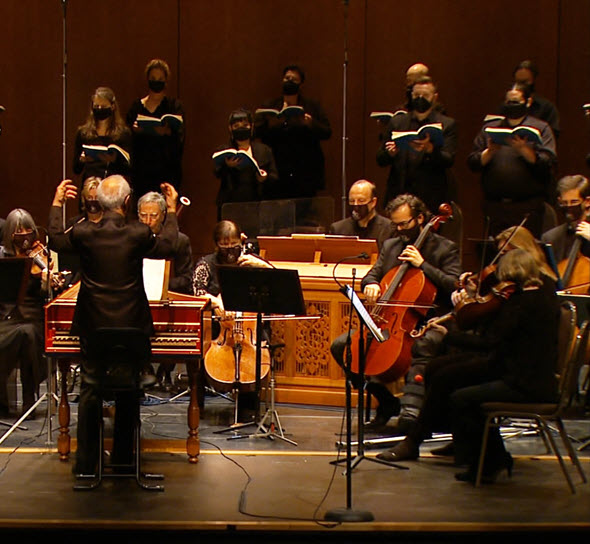 Review: Handel’s “Messiah.” Music of the Baroque Orchestra and Chorus conducted by Nicholas Kraemer. At the Harris Theater.

One might reasonably surmise that Music of the Baroque, with its long and rewarding history of performing masterpieces of the 17th and 18th centuries, would produce an assured and persuasive account of Handel’s “Messiah.” So it was surprising and puzzling to hear the uneven and generally quirky performance offered under the direction of Nicholas Kraemer on Nov. 29 at the Harris Theater.

The band was splendid – the unexpected co-star of the show, along with mezzo-soprano Allyson McHardy. Music of the Baroque is essentially an instrumental enterprise, and the little orchestra has achieved a high standard through the nearly two decades of British conductor Jane Glover’s directorship. The ensemble’s precision, warmth and general period esprit were in evidence from the outset with a lustrous turn through Handel’s brief opening Sinfonia.

But emblematic of what was so disconcerting, so mannered and even wrongheaded, about this “Messiah” arose in the bizarre perkiness of the instrumental Pifa, the quiescent pastoral interlude that immediately precedes the angel’s proclamation to the shepherds of the Savior’s birth. Kraemer’s impulsive rhythmic accents turned this becalmed night-music into frolicsome dance – softly voiced and elegantly played but wholly alien to the dramatic pitch of the moment. 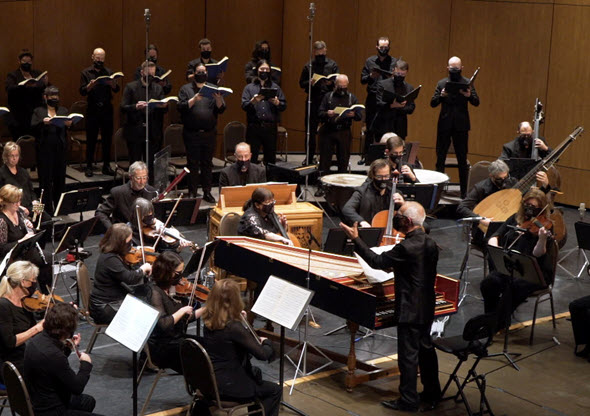 While the orchestra sounded assured, the chorus was persistently out of balance.

Kraemer’s sometimes curious choices of tempo or rhythmic stress, together with an inconsistent showing by the 26 choristers, produced dicey results in Handel’s plethora of great choruses, especially among the popular numbers of the oratorio’s first part, up through “His yoke is easy.” Voicing balances suffered from irregularity, and probably not because of the masks the choral singers wore. The chorus, prepared by guest director Benjamin Rivera, simply did not project a clear impression of textural perspective: which voice lines should lead when.

In fairness, it must be said that after the break following Part 1, starting with “Behold the Lamb of God,” the chorus sounded generally more coherent, more musically specific. The Harris auditorium is a sizable space to fill with sound, and it was only in the latter stages of “Messiah” that this chorus of ideal size delivered its music in the requisite quantity and to Handel’s contrapuntal purpose.

No doubt Kraemer had led many performances of “Messiah” as he did here, from a harpsichord placed out front. Time honored as that practice may be, it is perhaps not the best way to coordinate a well-conditioned instrumental ensemble with a sometime group of choristers. The Music of the Baroque band could almost wing it, but the chorus needed more contact with the conductor than Kraemer provided in his double duty as keyboard performer. 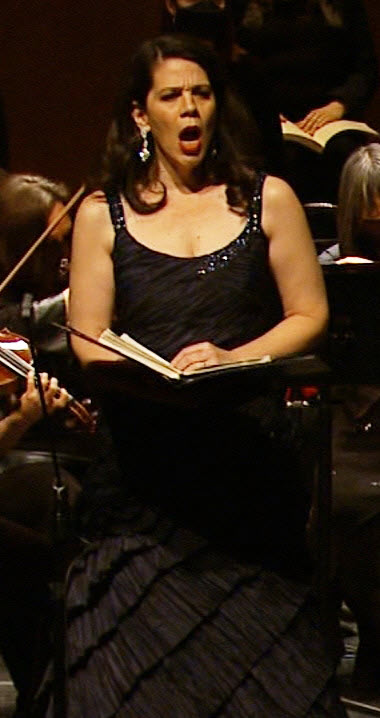 As a quartet that should be whole cloth vocally, the four solo singers also sounded somewhat patchwork. Here again, the singers may not have enjoyed the detailed support they needed from Kraemer. While soprano Sherezade Panthaki brought focused, ample and technically fine voice to “I know that my Redeemer liveth,” her delivery of the revelatory “Rejoice greatly” seemed almost constrained, disconnected from the world-changing exaltation of the text.

The importance of the solo tenor role in “Messiah” may be uniquely underrated – if only for his all-important opening recitative, “Comfort ye, my people.” This is Homer settling his listeners for the epic poem to follow. It must be consummately gentle, even-tempered, but also genuine and inviting. Here, tenor Brian Giebler went for the notes on the page at the expense of sentiment; his singing was shaped more by stylistic considerations than by lyric story-telling.

Bass-baritone Matthew Brook, who tended to belt his emotionally charged music, saved his best work for last, an heroic duo with trumpeter Barbara Butler in “The trumpet shall sound.”

It would scarcely be overstatement to say Allyson McHardy redeemed this production. Happily, Handel wrote generously for the mezzo-soprano, and McHardy answered every summons with a great performance that swept all before her. The dark hue of her voice, the intelligence with which she applied it and the sheer gravitas she brought to the music all put this listener in mind of the magnificent British mezzo-soprano Janet Baker. McHardy’s soulful, piercing declamation of “He was despised” offered a perfect foil to her lullaby tenderness in “He shall feed His flock.” Here was the art of singing, and the essence of “Messiah,” on thrilling display.