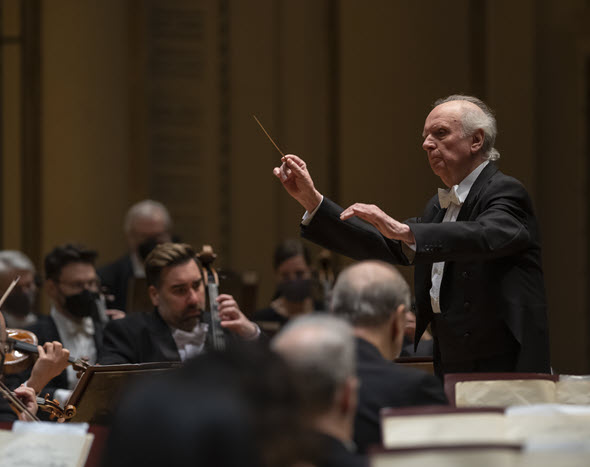 If it seems the Chicago Symphony Orchestra has raised its own high bar in this autumn of revival concerts after the long pandemic shutdown, a key contributing factor has been the quality of conductors who have paraded across the podium at Orchestra Hall. This progression from strength to strength was evident again in concerts Nov. 4-6 under the 82-year-old Polish-born German conductor Marek Janowski, who led a revelatory performance of Mozart’s “Jupiter” Symphony by an ensemble scaled back to the proportions of an 18th-century orchestra.

Janowski, who holds the title of artistic director and chief conductor of the Dresden Philharmonic, is an old-school maestro whose undemonstrative manner belies his thoroughgoing comprehension of the music at hand as well as the specificity of his musical direction. His excursion through Mozart’s “Jupiter,” the Symphony No. 41 in C major, was a marvel to behold, from the stentorian proclamation of its opening chords to the perfect clarity of the finale’s dazzling contrapuntal flight. 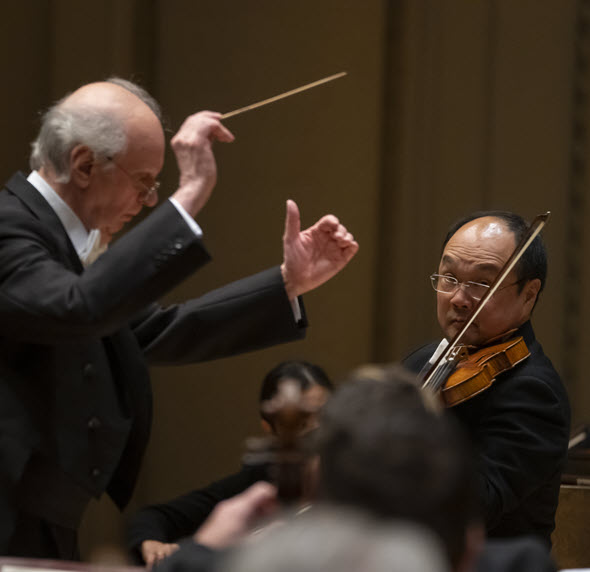 Janowski and the CSO provided generous support for concertmaster Robert Chen’s account of the Bruch Violin Concerto No. 1.

One well might pause first over that ending. Mahler, a great Mozart enthusiast who often conducted his Austrian forebear’s music in the concert hall and at the opera, might have taken the “Jupiter” finale as his model when he stitched up the last movement of his own Fifth Symphony, a prodigious exercise in layered counterpoint that seems to point directly back to Mozart’s. The Chicago Symphony translated Janowski’s utterly unmannered direction into a joyous, supercharged, crystalline romp, as warm as it was precise.

Happily, Janowski took every repeat throughout the symphony. (I would have stayed in my seat, dutifully masked, to hear the whole thing repeated again!) The work’s famous grand opening gesture instantly melted away in an answering phrase of consummate grace, the very pitch and essence of Mozart – and the first sign that the CSO strings were about to serve up the sort of burnished, pliant performance that few orchestras can match. 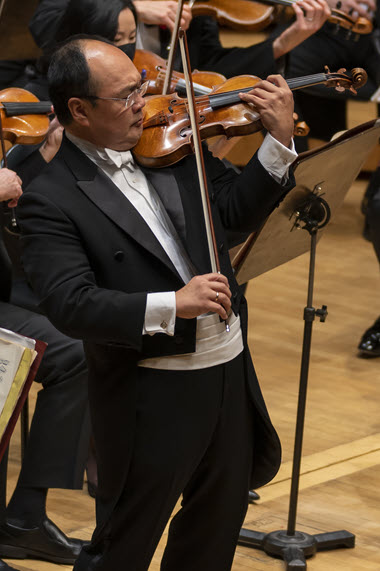 Through middle movements of easy breadth and operatic fluency, Janowski interleaved strings and winds with the sure hand and purpose of a conductor who has long nurtured this music in heart and mind. And then the finale, that ecstatic whirl, brilliant and irrepressible, to the double bar of this last of all the Mozart symphonies. Should Janowski return to Orchestra Hall to illuminate more of the Mozart canon, those would be dates to circle.

The program’s soloist, pulled from the Chicago Symphony’s own ranks, was concertmaster Robert Chen, who distinguished himself with a robust and virtuosic account of Bruch’s Violin Concerto in G minor. Like the “Jupiter” Symphony, the Bruch concerto is so familiar that concertgoers could hum along (and sometimes do!).

All the more credit to Chen for the personal stamp he put on the music – in the assured lyricism of his playing, his clear and nuanced sense of the work’s dramatic flow and his unbuttoned, bravura delivery of the fiery final movement. Chen’s big sound measured up to the concerto’s Romantic temperament, and his sheer technical facility was more than equal to the work’s formidable demands. Janowski’s led a band in generous support of the first player among them.

For an afternoon that was generally so rewarding, this one – I heard the Nov. 5 matinee performance – began on shaky ground, with a reading of Mendelssohn’s “Hebrides” Overture that commenced a bit stiffly before hitting its stride somewhere in the midst of Scotland’s mists and shadows. Once the music began to flow, however, the tenor was set for the concert to come.