Herbert Blomstedt, at 92, poured a long life
into luminous Brahms Second with the CSO 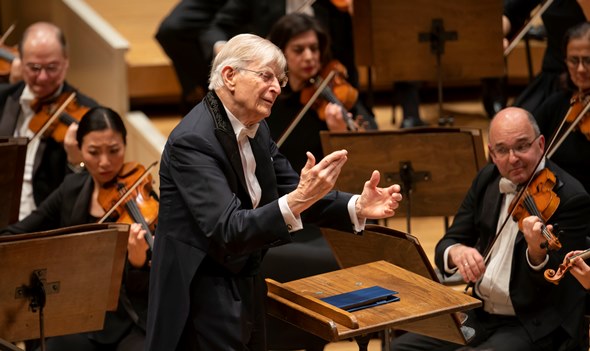 Herbert Blomstedt conducted Brahms’ Second Symphony without a baton — and without opening that book on his desk. (Todd Rosenberg photos)

Next up for the Chicago Symphony Orchestra, March 12-17 at Orchestra Hall, is a concert of Gershwin and Ravel that should be a stylish, jazzy rouser. But for the moment, I’m happy to reflect back on quite a different experience, a consummate display of elegance and the power of understatement: conductor Herbert Blomstedt’s program of Brahms and Mozart with French pianist Bertrand Chamayou.

Surely, the adage about having nothing more to prove kicks in around age 92. There’s also the old notion of appearance belying one’s age. Blomstedt, who made his conducting debut with the Stockholm Philharmonic in 1954, will turn 93 in July. He conducted Brahms’ Symphony No. 2 in D without a score. Well, there was a small volume, presumably a score, on the conductor’s desk, but he never so much as opened it. 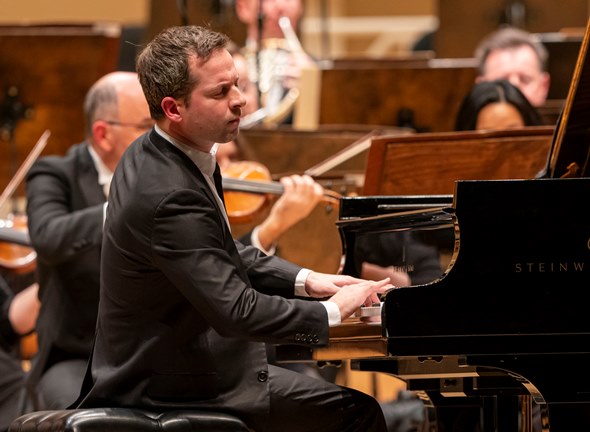 Bertrand Chamayou made an eloquent CSO debut with Mozart’s Piano Concerto No. 23 in A major.

This was not a Brahms Second from memory, however; it was musical leadership that emanated from a place deep in the heart or soul. Blomstedt’s broadly drawn, detailed and luminous Brahms was the issue of a long life’s immersion. I suppose it wasn’t even about that unopened score; it wasn’t about notes at all, but rather the spaces between the notes, the music’s living breath and its transcendence. That quality cannot be found on the page. It resides within musicians, anyway in musicians of a certain quality.

Brahms turned out his Second Symphony in remarkably short order after the years-long agonizing that attended its predecessor. Unlike the grand and heroic First Symphony, self-consciously resonant of Beethoven and perhaps protesting too much its author’s outstripping of that giant shadow, the Second expresses calm and composure and confidence. It does rip at the close, but that’s more exclamation mark than proclamation.

It is substantially chamber music writ large, and that is just how Blomstedt approached this warm and finely wrought music often likened to Beethoven’s “Pastoral” Symphony. The Chicago Symphony responded to Blomstedt’s expansive tempos and immaculate voicing with a performance that felt at once impassioned and weightless. Here was the kind of burnished but restrained, virtuosic and luminous playing, ensemble-wide, that places this orchestra among the best anywhere.

Blomstedt doesn’t use a baton. He conducts with his hands, which never become fists. Well, one did actually, at the end of the first movement, when Blomstedt responded to principal horn David Cooper’s eloquent solo work by shooting an appreciative paw in his direction. Or he might have been saluting the horns altogether. They shone throughout, as did the woodwinds in their exchanges with a string choir that indeed brought a singing character to their refined playing.

The finale of the Second Symphony is a masterpiece of dramatic construction. Blomstedt got right at the core of its surge-and-relent progress and the rhythmic churn that keeps pushing the music forward. Only in the last pages did that churn blow into froth and then into a sonic torrent exhilarating in its pure energy and brilliance. 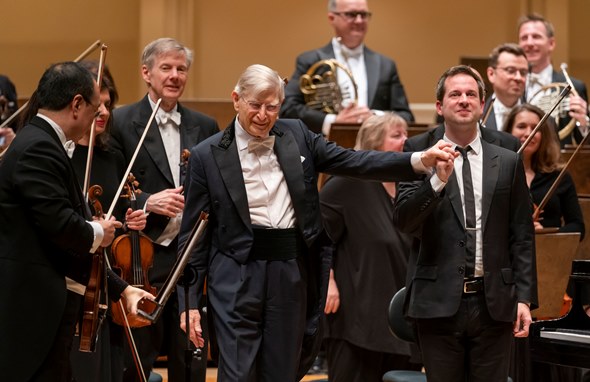 Maestro and pianist shared the applause after their chamber-scaled Mozart concerto.

Blomstedt looked quite pleased – with the orchestra, of course, but perhaps with himself as well. This was a very personal Brahms Second and it had been, in its mostly quiet fashion, spectacular.

It also proved to be an ideal match for Mozart’s Piano Concerto No. 23 in A, K. 488, which spotlighted Chamayou in his CSO debut.

Chamayou, who turns 39 this month, gave the impression of a musician after Blomstedt’s own heart. Mozart’s piano concertos in general, and certainly this one, are like opera without words – lyrical and buoyant and witty, seemingly cut from very cloth of “Figaro” and “Cosi” and “Don Giovanni.” These really are chamber works, even a concerto as late in Mozart’s career as this one, and the scaled-down orchestra was just the right size for an intimate lark.

Vital spirit, technical finesse and an unfailing sense of style all came together in Chamayou’s playing. He imbued the outer movements with irrepressible life and turned the central Adagio into a bittersweet rumination that scarcely needed a text to invoke the opera stage. Blomstedt and the miniaturized CSO answered with a fluent partnership that lifted the pianist’s musings to a state of transfigured soliloquies.