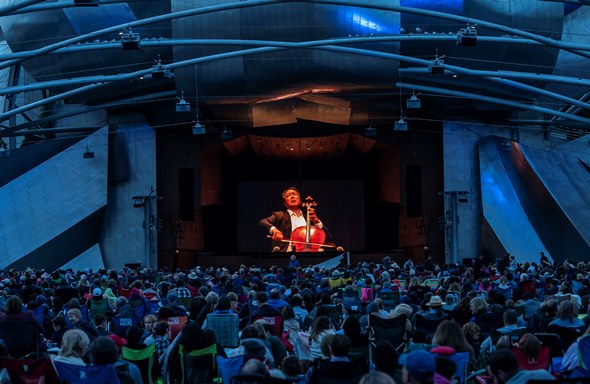 Yo-Yo Ma, live on the big screen at Pritzker Pavilion, performed Bach’s six suites for unaccompanied cello for an audience of 20,000. (Concert photos by Todd Rosenberg)

The scene on the perimeter of Millennium Park in the early evening of June 20 looked a lot more like Lollapalooza than the turnout for a prodigious cello recital. The gathering throng was lined up for blocks, down Michigan Avenue and around the corner and up the Monroe Street hill – 20,000 enthusiasts patiently waiting to filter through security for a rare event, maybe the opportunity of a lifetime: to hear Yo-Yo Ma play J.S. Bach’s six suites for unaccompanied cello in a non-stop, two-and-a-half-hour immersion.

When Ma began to play, his beaming image magnified on the Pritzker Pavilion’s giant screen, that crowd became 20,000 individual souls rapt in wondrous silence. The occasional siren and helicopter notwithstanding, what ensued surely met the fondest hopes of the most celebrated of cellists, his vast audience and the sponsoring Chicago Symphony Orchestra, which presented Ma as a gift to the city. This remarkable experience came free. 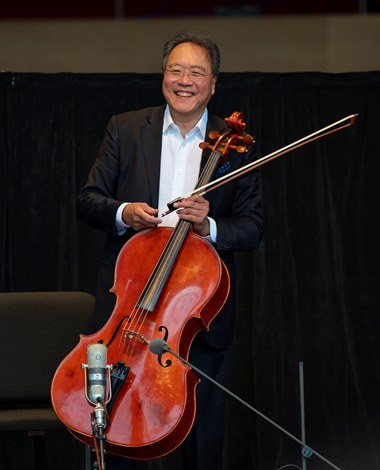 Ma has been performing what he calls the Bach Project all over the world. He plays the six suites – written around 1720 – from memory, with only minimal breaks between suites and without an intermission. It’s a mesmerizing stretch of time and music, and Ma ensured that spirit of engagement by stitching one movement to the next within each suite to avoid the digression of intermittent applause. But at the end of every suite, the ovation was raucous. Sure, by the end of the third suite there was visible attrition; yet, at the end, after Ma had played all six of these prodigious works, the place was still effectively packed, the applause rapturous from listeners who seemed to be in no hurry to leave even then.

They were rewarded with a most unexpected, actually quite improbable, but absolutely delightful encore: Ma was joined onstage by several young musicians from the Chicago project Little Kids Rock and by that classic rocker Jim Peterik, co-founder of the ’80s band Survivor. The whole gang, Ma on a now electrified cello among them, roared through Peterik’s anthem “Eye of the Tiger,” which he wrote for the movie “Rocky III.” Seriously into this liberation, Ma did things with – and to – his cello that took it somewhere beyond the galaxy of Bach. 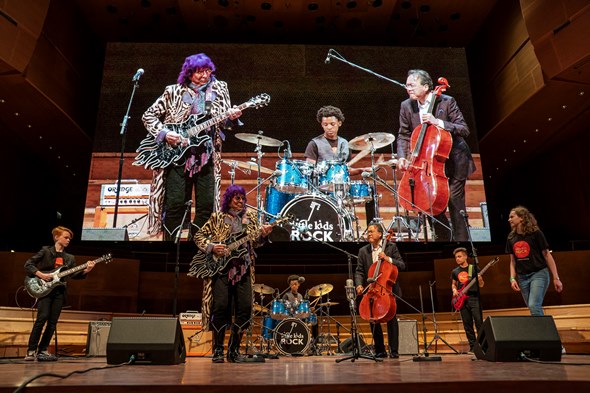 The rollicking postlude was a kick, but it wasn’t the reason for this huge assemblage or its real reward. That was Bach and the chance to hear the great master Ma commune with the six solo suites. On a printed program, all six pieces bear a striking similarity. They’re all laid out in six movements – a ruminative, virtuosic Prelude followed by a nearly identical series of dances: a majestic Allemande, a fleeting Courante, a slow and introspective Sarabande. And all six end with a spritely Gigue. But two by two, the suites differ in their fifth movements: The first and second go from Sarabande to Menuet, the third and fourth replace the Menuet with a Bourrée, and the last two suites switch from Bourrée to Gavotte.

All dances, but with an astounding range of expressive variety. Ma, who has lived with this music for half a century, rendered Bach’s formidable technical demands essentially invisible. This was a recital built on and devoted to content – the humanity and spirituality of six consummate works of the Western musical canon. 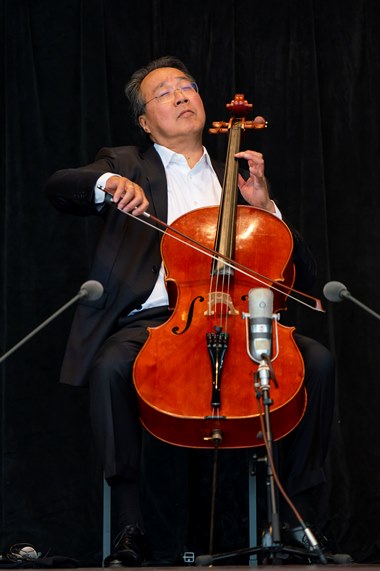 Ma took the time to indulge Bach’s solemnity, but he also let his technical wizardry fly.

When he got to Suite No. 3 in C major, Ma took microphone in hand to dedicate this powerfully structured and eloquent music to Chicago, “the city of strong shoulders,” as he put it. Ma understood the meaning of his dedication: He has had close ties to the city as the Chicago Symphony’s creative consultant. Similarly, he dedicated Suite No. 5 in C minor, music of pervasive solemnity even in its swiftest episodes, to all those among his listeners who had lost loved ones.

The monumental Suite No. 6 in D major, arriving as the culmination of such a heady traversal, seemed to occur outside of time. How much time had passed? Could anyone in a still-absorbed sprawl of humanity have answered that question? Here, as he had done throughout the evening, Ma indulged the full spaciousness of Bach’s more contemplative movements and let his wizardry fly when the music turned bright and brisk. His ripping, improvisatory dispatch of the suite’s Gavotte left one to marvel and delight at the man’s boundless energy and esprit.

Who knew that sly and, well, rowdy Gavotte was itself prelude to the unbuttoned Ma to come – when this sublime artist would get down with an old Survivor and the new generation of Little Kids Rock.