Role Playing: Maurice Jones wasn’t shooting
for CST’s Hamlet – but it simply was to be 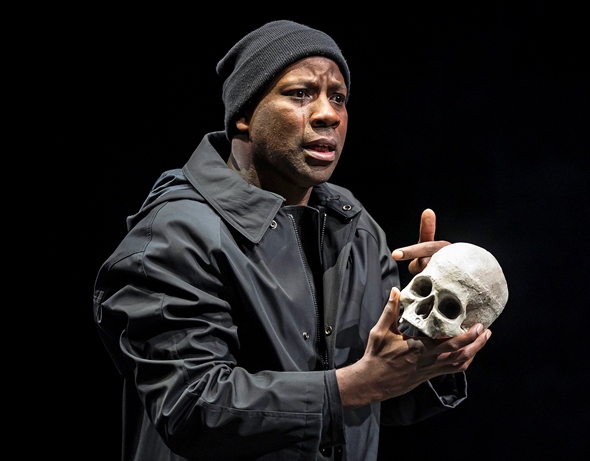 Maurice Jones, as Hamlet, reflects on the symbolism of life and mortality represented by the skull of the one-time court jester Yorick. (Production photos by Liz Lauren)

Interview: The actor, who auditioned for a smaller part at Chicago Shakespeare, says he decided to tackle his first Hamlet on instinct.

Maurice Jones, who plays the title role in Chicago Shakespeare Theater’s current production of “Hamlet,” apparently made quite an impression at his audition. Actually, he overshot just a bit. He was trying out for the supporting part of Laertes.

Jones had never played Hamlet, but when the actor who originally won the job had to back out, CST artistic director Barbara Gaines, who also directs this show, asked Jones if he’d be game to step up – and take on one of the greatest and most challenging roles in theater. 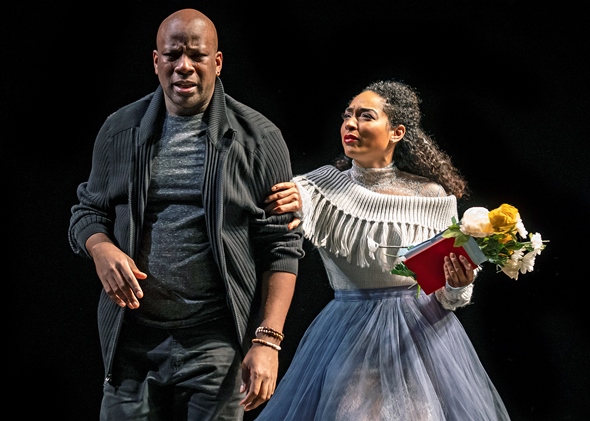 When Ophelia (Rachel Nicks) tries to return a few mementos to Hamlet (Maurice Jones), he lashes out at her as the embodiment of corruption in all women.

“Barbara brought me in a week before rehearsals began, and we read the play four times together, just she and I,” Jones says. “She trusted me from the start, but she really put her trust in all of us. Her willingness to defer to what she perceives as a roomful of brilliant actors is rare, priceless.”

Jones’ instinctive immersion into the crisis – he calls it the grief – of the melancholy Prince is exceptional, too. I was so taken by his ability to honor the language while charging it with the fire of spontaneity that I went back to see his Hamlet a second time.

“I have a reverence for the language of every playwright, whether it’s Shakespeare or Clifford Odets or August Wilson,” says the actor. “If the language is not honored, you really don’t understand what’s been said. Actually, we spent two weeks of table work dealing with the language, trying to makes sensible speech of words and phrases no longer familiar in our time. But it is a joy to speak those speeches. The words are so wonderfully rich and clear.”

And fraught with strands and layers of meaning. One of Jones’ most striking moments is his impulsive delivery of Hamlet’s soliloquy “To be or not to be” – a distracted rumination on whether the better choice is to grapple with life’s brutality and pain (“the thousand natural shocks that flesh is heir to”) or simply end it with one self-inflicted thrust. 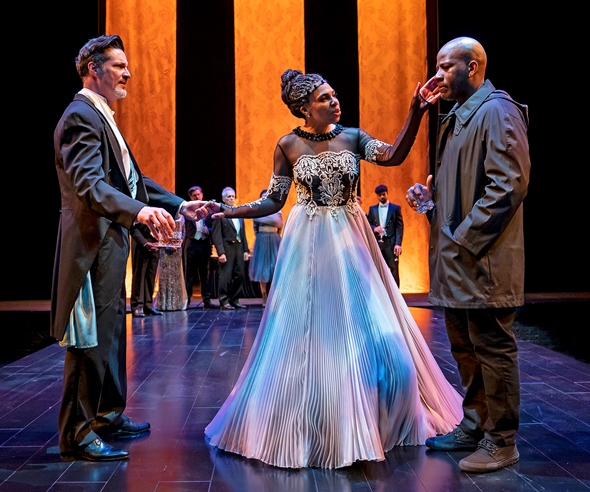 Young Hamlet has arrived home from college to find that his father has died suddenly and that, almost as suddenly, his mother has married the dead father’s brother. When the ghost of Hamlet’s father reveals that he has been murdered by that same brother, Hamlet vows vengeance – only to find himself unable to take action. “To be or not to be” is a summary reflection on Hamlet’s ambivalence.

“The lines tumble out of him,” says Jones. “Here the language moves with ferocity. It moves at such a clip that you don’t get to take a full breath. Everything lies in the darkness of this question, and Hamlet unpeels it like an onion. Like his other soliloquies, ‘To be or not to be’ is the farthest thing from a precious, drawn-out recitation. Hamlet is excavating very deeply. He makes questionable choices, but he is always searching. And of course, in ‘To be,’ you can hear half the house reciting along, especially the students.”

There  is, to be sure, a prior question in the mind of anyone who has ever read or seen “Hamlet,” and I posed it to Jones: Who is this guy, anyway?

“That is the question,” the actor replies with a laugh. “I didn’t have a lot of time to think about that, which allowed me to lead with my heart and my instinct. What I feel is going on with Hamlet is an incredible amount of grief. I do have my father, and my parents are still married. It’s a great leap for me to reach Hamlet’s place. 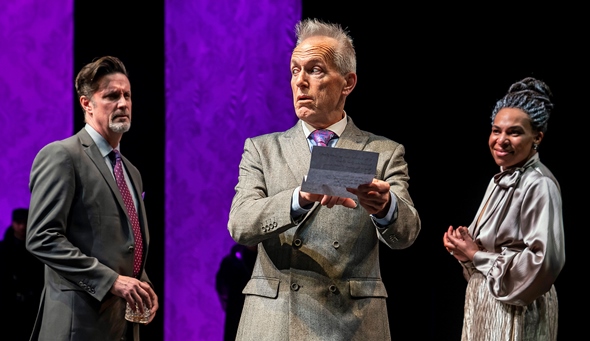 The pompous and foolish Polonius (Larry Yando, center) both amuses and annoys the King (Tim Decker) and Queen (Karen Aldridge).

“He’s an incredibly intelligent young man in a world where he suddenly no longer belongs. He doesn’t know whom to trust, and nothing makes sense to him anymore. I love Barbara’s choice to have the audience see Hamlet first in darkness and rain, weeping for his father. Grief is the engine of the play.”

Grief, not madness, Jones insists: “The text makes it clear that Hamlet’s odd behavior is an affectation, a disposition put on that will allow him to observe without being observed, to see and hear better. He thinks too much, but he is not mad.”

Not even, the actor adds, when he flies angrily at poor Ophelia (played by Rachel Nicks), to whom Hamlet has recently protested great love.

“Their big scene together comes right on the heels of ‘To be or not to be,’ when she wants to return things he has given to her. His first reaction is, ‘Oh, my God – you, too? You’re the last person I would expect to turn on me.’ Something goes off in him. He can’t stand to look at her. He commands her, ‘Get thee to a nunnery.’ In Shakespeare’s time, the word nunnery had a double meaning – the conventional one and the ironic one of a brothel. At this point, Hamlet sees all women as corrupt.” 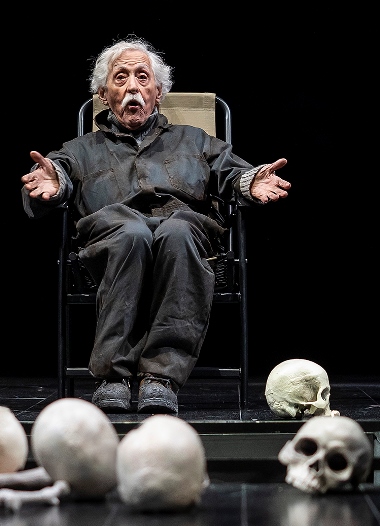 As the gravedigger, Mike Nussbaum “grounds that scene in something that can never be faked,” says Maurice Jones.

At the emotionally opposite extreme falls the gravedigger’s scene, where Hamlet comes upon a philosophical old man preparing what Hamlet soon will discover is Ophelia’s grave. The iconic role of the gravedigger is played by the grandest old man in Chicago theater, Mike Nussbaum.

“Mike grounds that scene in something that can never be faked,” says Jones. “I am literally looking into the eyes of a 95-year-old man. He’s singing a song (“Isn’t it grand, boys, to be bloody well dead?”) and Hamlet, the great observer, muses on his own youth. He learns that the skull he holds is that of Yorick, the court jester he knew and loved as a boy and on whose back he often rode. This bone Hamlet holds in his hand reminds him of his own mortality, the inevitability of death.”

The most draining scene for Jones, night after night, is Hamlet’s confrontation with his mother Gertrude (Karen Aldridge) in her bedchamber. The Prince confronts his mother with the damning circumstances of his father’s murder and her quick marriage to her dead husband’s brother. In the midst of his violent tirade, he detects someone hiding behind a curtain (the king’s minister Polonius, played by Larry Yando) – and impulsively stabs the unknown figure through the fabric, killing him.

“After that scene, I come off the stage with the trembles,” Jones admits. “Karen is fantastic. She wanted the physicality. Hamlet stabs the man, not even knowing who he is, then goes right back to his mother with the moral accusation that what he just did is less important than what his mother has done to his dead father: the crime of a hasty marriage. The fact that he has just committed murder doesn’t even faze him, he is so in the dark.”

But the most punishing part of playing his first Hamlet is not strictly the huge ebb and flow of emotion, Jones says. It’s that plus the sheer vocal strain of the largest role in the entire Shakespeare canon.

“I am classically trained. I know how to breathe and support,” says the actor, who has required medical attention to his voice several times during the run and once called in unable to perform. “I’m dog tired and in a puddle of sweat at the end of every performance. And hoarse every night. The part was never on my radar. I never had any designs on playing Hamlet. This has been such a wonderful gift.”