This Just In: The following is a news release written by an arts organization and submitted to Chicago On the Aisle.

Replacing Wall as Marguerite in the Lyric’s new production of “Faust” will be the internationally celebrated American soprano Ailyn Pérez. Said Freud: “Ailyn made a wonderful debut at Lyric in last season’s Celebrating Plácido concert, and we are delighted that she is able to join us for Faust when rehearsals begin in February.” 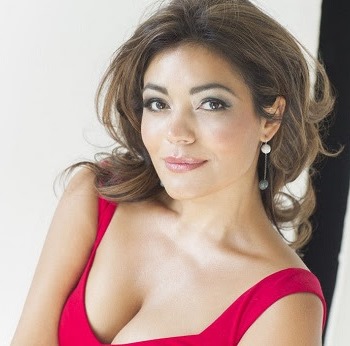 Freud said that Wall’s doctors “expect a full recovery within a few months, according to her manager. Everyone at Lyric wishes Erin all the best and looks forward to welcoming her back in future seasons.”

Pérez, a Chicago native currently residing in Elk Grove Village with her family,  comes to the Lyric in the middle of a busy season of lead roles at the Metropolitan Opera, including the title role in Massenet’s “Thaïs,” the Countess in “The Marriage of Figaro” and, later in the season, more French repertoire at the Met, this time for Juliette in “Roméo et Juliette.”

“It’s such a joy for me to return to Lyric Opera of Chicago for my operatic house debut as Marguerite,” said Pérez. “I’m honored to be singing this extraordinary and complex role with a dream cast of wonderful colleagues in this new production, directed by Kevin Newbury. As a proud Chicago native it will be such a pleasure to perform Gounod’s mesmerizing score in front of a home crowd, and I also look forward to working with Maestro Villaume again this season, following our collaboration on ‘Thaïs’ at the Metropolitan Opera.”

In one of her signature roles of Violetta (“La traviata”), Pérez has performed in the world’s major opera houses including Milan’s Teatro alla Scala, London’s Royal Opera House, and the San Francisco Opera, as well as the prestigious companies of the Bayerische Staatsoper in Munich, Opernhaus Zürich, Staatsoper Berlin, and the Hamburgische Staatsoper.

Her other signature role, Mimì in “La bohème,” has brought Pérez great success at the Metropolitan Opera, La Scala, the Bolshoi Theatre in Moscow, Opernhaus Zürich, and LA Opera, among others. She has previously portrayed Marguerite at Santa Fe Opera and in Staatsoper Hamburg to great acclaim.

A graduate of Philadelphia’s Academy of Vocal Arts and the Indiana University Jacobs School of Music, Pérez was the first Hispanic recipient in the 35-year history of the highly prestigious Richard Tucker Award, which she won in 2012. Winner of the 15th annual Plácido Domingo Award, the 2017 Sphinx Medal of Excellence, and the 2016 winner of the Beverly Sills Award, Pérez was also featured as the cover story of Opera News in September 2017.

The quintessentially romantic “Faust,” which premiered in Paris in early 1859, is one of the most celebrated stories in opera. The aged philosopher Faust – at the urging of Satan’s agent Méphistophélès – is made young again in exchange for his soul. The drama encompasses Faust’s encounter with the innocent Marguerite, his wooing and subsequent abandonment of her, the death of her brother Valentin at Faust’s own hand, and Marguerite’s ensuing madness, death, and redemption. Lyric’s haunting new production is designed by the renowned visual artist John Frame.